Day three and things are still looking bad for Shell. Protesters and the Irish bog have the upper hand, with Shell receiving flack and Gardai humbled as crane sent packing. 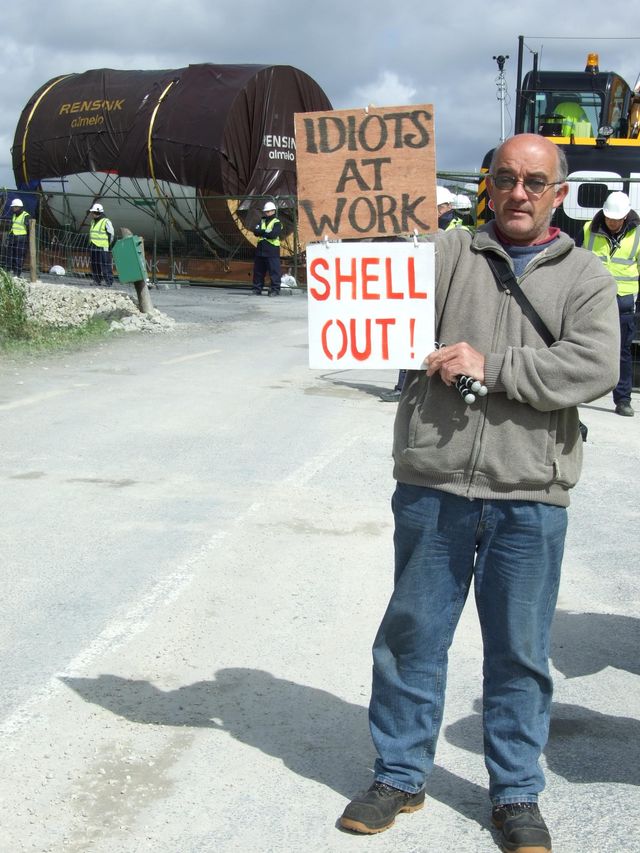 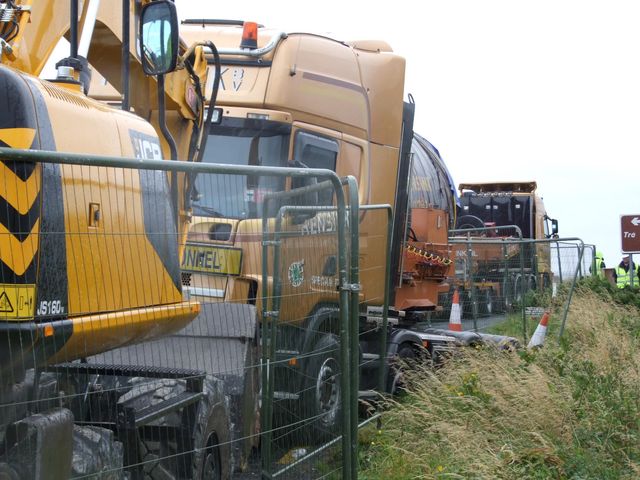 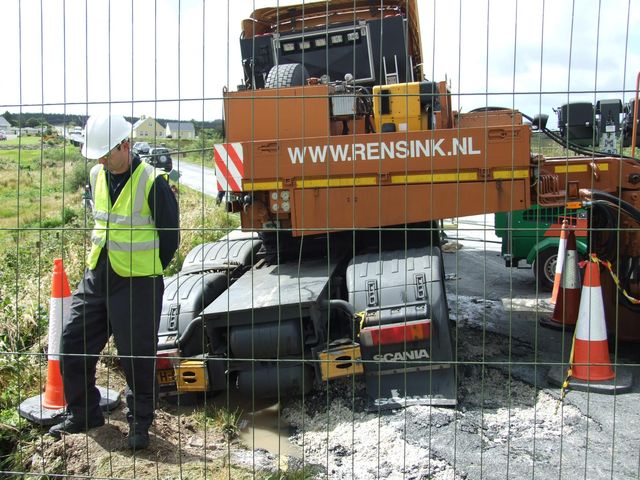 Truck in ditch as road gives away under weight 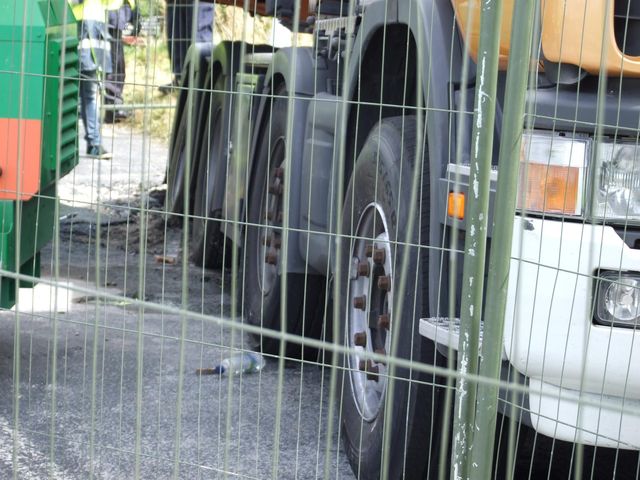 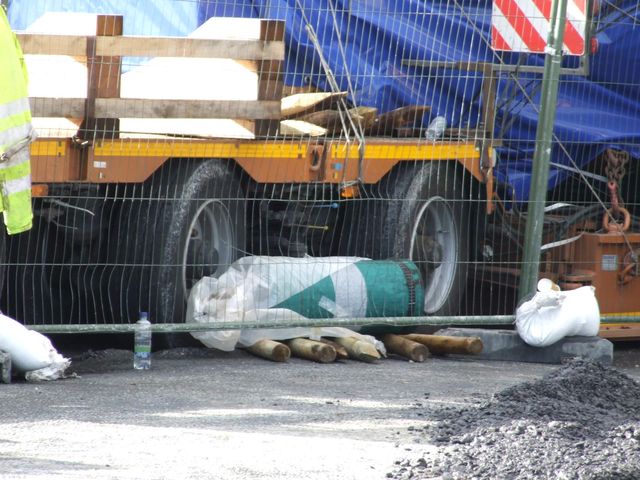 Day Three in the TBM House
Somewhere in Erris idiots at are work...

Most of the day was quiet around the TBM itself. Fencing was put up and IMRS formed a cordon around it. We are able to walk up and around the TBM - in places you can reach out and touch the Fionnuala. The turning wheels have caused the tarmac to scrunch up in quite a few places. The front of the truck has pushed the ditch out two foot, the back axles sitting in a pool of water and looks like one of them has buckled. The road is pretty badly damaged and it is easy to see why the driver was not going any further. The load on the back is also pushing the frame of the trailer down onto the tires.

Most work was on finishing bypasses around the TBM so vehicles could get in and out of Rossport. Cars are able to get to Rossport, but the direct route is still not possible, meaning the road through Glenamoy village is still being used, causing damage to locals gardens and the road surface is being destroyed by turning lorries from Barretts & Lennons. Local councillors moaned about it and asked for reports from Shell's pet Mayo County Council.

However, one of the Rossport 5 and Goldman Prize winner Willie Corduff did something about the haulage trucks coming through the village, standing in front of one truck coming through. Unfortunately arrested, but released without charge two hours later.

Locals and campers monitored the situation all day, everyone in good spirits enjoying the sight. Even though it underlines Shell's idiocy in attempting the whole project in the first place, it is awesome to see the unbelieveable.

Elsewhere, the two arrested for the Crossmolina lock-on pleaded guilty in Ballina court. One was fined 200 euros on the spot and the other had their punishment deferred to the September hearing in Belmullet, when many others arrested on previous protests are also having their cases heard.

Gardai were around all day, but in small numbers. Amazing given how much was spent on escorting it a day or so ago that they've pretty much abandoned it now. Definitely a question or two to be asked there about a colossal waste of money. Maybe they were getting the bollocking they truely deserved as the trucks could only have been on that road with their permission.

Some people did a bit of digging and it turns out that not only was there a major failure of judgement among experienced people who should have known better about taking a heavy load up a rural road through bogland, but it may also been illegal. According to the road traffic managment plan, the approved haulage route ends at the Ballyscally junction to Aghoos. Peter Hynes, the Mayo County Council Director of Services / County Manager who always bends over backwards to help Shell, has said that Shell had all the necessary permissions, which, to put it politely is disassembling somewhat. Did he really give permission for Shell to go up to Glenamoy? Maybe people should ring his office ((094) 90 24444) and ask to see the documents. Heads need to roll on this one.

In answer to someone's question, the trucks came the designated route, on the main route past Ballinaboy to the Aghoos compound. They failed to make the turning at the Ballyscally turning where the animal labs are, so continued up to Glenamoy / Rossport junction - to turn around and try from the other direction.

But back to the direct action bit. In the evening reports started coming in (and this is the beauty of a community wide campaign - eyes and ears everywhere) that a crane was on its way. Shell were saying that the TBM was going to be moved. Mmmh, a lot of people thought otherwise. Infact, some turned thought into action. Maura was there with her car across the road at Bellinaboy bridge, holding it up. More sped down there to give support, and before you could blink another protester was up on the crane.

The whole road was blocked. Shell workers from the refinery had to go the long way around, gridlocking the road out from Pullathomas - and, we are told, made to wait by some local residents none too happy at the sight of them.

Maura's car was pulled out of the way, but the gardai ended up crashing it into the side of the bridge, causing them to abandon the effort. After a while it was back in place, making sure the cherrypicker to take down the person on the crane could not reach them.

Several hours later somewhere between sixty and hundred people came to enjoy the sight of the the crane stuck in the middle of the road. While some might moan about the blockage or emergency services, the fact remains that these are the roads of the local community and it is they who are making the decisions that Shell needs to be kicked out - and taking action. This was not a local community annoyed by the road being blocked, but happy to see Shell taking another poke in the eye.

Gardai arrived - then called for backup as they realised they were struggling to contain the situation. You could see they were loosing it, dragging out various old faces including Brett and other faces familiar from baton charges several years ago; some even thought pushing young girls around with their heavy hands was appropriate. They were met with fury.

There was a stand-off, with the gardai isolating Maura and the crane. More scuffles. The cherrypicker was temporarily occupied with the Gardai assaulting a number of people to get it back, including pressure-pointing - the usual over-reaction from the likes of Butler and Gill from the Public Order Cutting Team. At least one gardai had his pepper spray out and Brett was trying to use his torch as a baton.

Maura's car was toed out of the way once more and the person from the crane arrested - and given a cheer. The cherrypicker itself started listing dangerously as one of its tires deflated.

Then as we readied ourselves for the crane to come through, it reversed and disappeared into the night, last seen somewhere beyond Bangor... They gardai had lost the stomach for the fight, it seems. You could hear the happiness in the voices of the people all around us. Eleven years on in this long fight, victories were still possible in the face of Shell's invasion. This part of Erris remains free in the hearts of the people there.

Afterwards, people went back up to Glenamoy to keep vigil there. People continue to arrive at camp. This is not over yet.