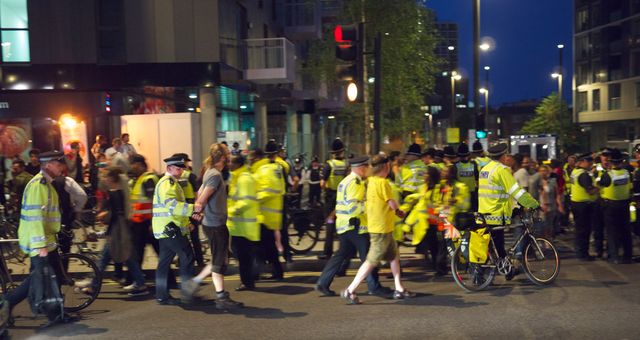 erm, that photo may be "via schnews", but it was originally on london indymedia and is mine.

i don't mind its non-commercial use, especially for the likes of schnews and indymedia, but a credit is proper and polite.

hardly surprising but then all we've had from the Beeb is grinning, mindless adoration of the whole Olympic shindig anyway. What about those of us who couldn't care less about the Olympics? We live in an impoverished town in West Yorkshire where there are no jobs, no opportunities and no hope for most people. of course we guessed that there would be no coverage of any protests from the mainstream media.

http://www.guardian.co.uk/world/2012/aug/13/trapwire-surveillance-system-exposed-leak?newsfeed=true was hidden by an indymedia mod - presumably classing it as conspiracy theory.

For anyone who was arrested at Critical Mass who feels that their rights under the Data Protection Act may be breached due to the use of TrapWire, or indeed anyone arrested at any London-based political protest over the last five or six years, may complain to TrapWire by following the guidelines at

I was on the iceberg demonstration yesterday on Whitehall, alongside Topless Equality and the police man approached me and asked when we were leaving and if he could help in any way. So I said "Nothing personal; Can we have our bikes back?"
"?"
"Last month"
"Oh, the OLYMPICS. That wasn't to do with us; that was the nasty police. We are the nice police"

Can I just comment that the fact the "Olympics" may be happening in London is just a coincidence, and I do not see why they had to impose conditions on Critical Mass in this way. Our intention, on the riseup list, was clearly not to disrupt the olympics and this is merely an excuse by the press office for this attack on Londoners.

This is not the first time I've heard anti-cyclist spin from a political police officer. What a pain.

I heard a rumour that the mass split with some realising what was going to happen so a group peacefully continued outside the temporary protest-free zone and had a great ride through south London.