An info-talk hosted by new support group 'CMS Wales' on the persecution of > across Europe with a focus on Calais, a bottleneck for people coming to the UK.

All are welcome to the presentation, film and discussion at the office behind the Hungry Planet, 142 Clifton Street, Cardiff CF24 1LY. 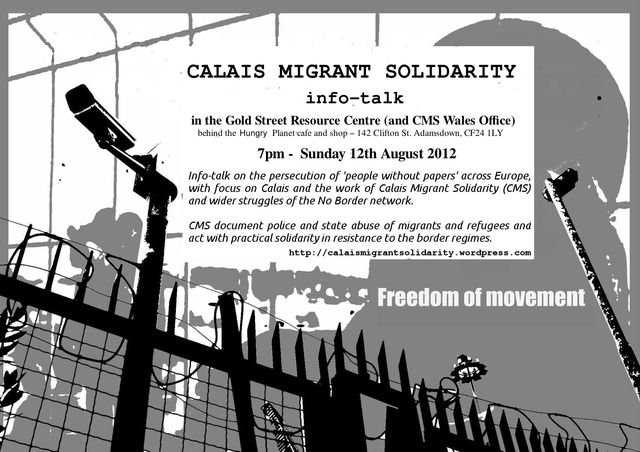 Info-talk flyer for the CMS groups!

The talk in Cardiff is part of a summer info-tour for Calais Migrant Solidarity - the text from which is reprinted here:


In Calais migrants and refugees are regularly attacked, beaten and denied basic necessities as part of a deliberate systematic policy by the UK and French government aimed at dehumanising people and controlling their movement.

This year, in the lead up to the Olympics, there has been a relentless attack on peoples living spaces, constantly evicting people and trying to drive them out of the city to pave way for training athletes and tourists in the city. Calais is an official 'Olympic village' during the Games.

In the face of rising surveillance and ID controls, fortification of borders and detention centres, deportations along with deployment of border armies across Europe, people who are 'foreign' come under constant attack by authorities and are subject to racist and fascist attacks.

Calais Migrant Solidarity work alongside migrants and refugees, documenting police and state abuse and act with practical solidarity to people no matter where they are from, or whether they have the 'right' kind of identity papers.

Come along to this info talk to find out more about the situation in Calais and wider Europe, and to share information and ideas in the resistance to the border regimes.


For more information about Calais visit the blog at: