US: Occupier charged with terroristic felony

Aug 8 2012 Northampton County District Attorney John Morganelli announced today the withdrawal of the most serious criminal charges against a protester who sparked fears of robberies Monday at two Easton banks. 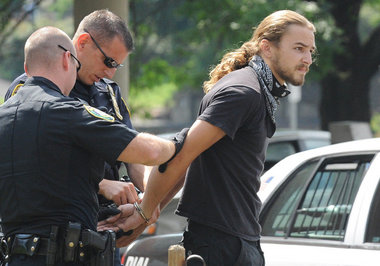 David "Nature Dave" Gorczynski, 22, of Easton, still faces four charges after dressing like a bandit and carrying a sign reading, "You're being robbed" at the banks, Morganelli said.

Phil Lauer, Gorczynski's defense attorney, said they were glad to see the most serious charges dropped but that he believes Gorczynski's actions were protected by the First Amendment. Gorczynski stood silently at the banks' entrances and made no threatening movements to anyone, Lauer said.

"We're going to have to respectfully agree to disagree on this one," Lauer said of Morganelli's interpretation. Lauer refused to rule out any options in court, including a plea deal, going to trial or applying for a first-time offender's program.

Easton police received a 911 call Monday morning from the Wells Fargo Bank in the first block of South Third Street about a man holding a sign with the words gun, bank and robbery, according to authorities. They found Gorczynski in the parking lot of the Bank of America on Larry Holmes Drive wearing black clothing and a black bandana.

Morganelli said he advised Easton police to drop two charges of attempted robbery against Gorczynski because he showed no such intention. The remaining charges of making terroristic threats, a felony, and summary disorderly conduct should stand, however, because Gorczynski caused people to fear for their safety, the district attorney said. That type of behavior is not protected free speech, he said, comparing it to shouting fire in a crowded theater.

"'You're being robbed' is not a political statement. It's a direct statement that brought real fear to employees and its customers," Morganelli said. He said he would be willing to negotiate a plea deal for Gorczynski and is not seeking prison time.

"Obviously, that showed to me he was aware that was going to cause some sort of concern," he said.

Following Morganelli's announcement, Gorczynski was standing outside the Northampton County Courthouse with a sign reading, "The banks got bailed out. We got sold out." A stream of drivers honked and waved at him, shouting support. Gorczynski, dressed in an Occupy Wall Street T-shirt, deferred comment to his attorney.