The cases of two census resisters opposed to arms manufacturer Lockheed Martin's census involvement continued today in Liverpool with another pretrial hearing at Dale Street Magistrates Court. The hearing coincided with the 67th anniversary of the atomic bombing of Nagasaki in which the company now known as Lockheed Martin made the planes that dropped the bombs. 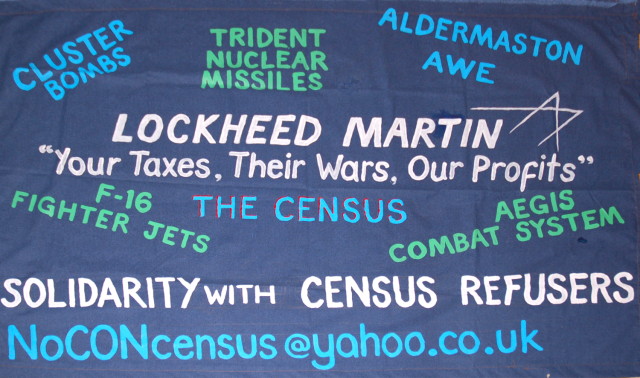 Sarah Ledsom and Andy Manifold's cases, ongoing since last December, have now been adjourned to a proposed trial date of 8 October. Both defendants object to the fact that Lockheed Martin UK, a wholly owned subsidiary - and flag of convenience - for Lockheed Martin US, were awarded a £15 million contract to process the census data by the British government.

As well as hearing human rights challenges to the prosecution under the 1920 Census Act, the court will consider whether there has been an abuse of process and serious inconsistency in the way these and other census cases have been prosecuted. Around 400 cases were brought to court from possibly over a million failures to return census forms. In recent months, a number of cases have been dropped by the CPS without explanation. Large amounts of public funds are being wasted on the cases that are dragging on for months with repeated pre-hearings and last minute adjournments. At least one of these is scheduled for a two day hearing.

The 2011 Census is over. Prosecuting these cases isn't going to get the forms filled in and in any case, only a tiny proportion of those who failed to complete the forms are being prosecuted. For instance, we know of no cases where anyone was prosecuted for returning a defaced form or for missing out questions. It's also quite likely going to be the last census ever so one might be forgiven for concluding that the prosecutions are simply vengeful.

More about the 2011 census and prosecutions here:
indymedia census topic
count me out

There have also been a number of judicial reviews challenging aspects of the prosecutions.

Lockheed Martin: a long history of profiting from mass murder

Today's hearing coincided with the 67th anniversary of the bombing of Nagasaki (9th August).

The B-29 planes, Enola Gay and Bockscar, that were used to drop the bombs on Hiroshima and Nagasaki in 1945 were built by the American Glenn L Martin company, now Lockheed Martin.

Lockheed Martin also manufactures Trident nuclear missiles. Housed on British and American submarines, these are an ever-present threat to life on this planet.

From CND (2010): “Each submarine in Britain carries up to 8 missiles on board, and each missile carries up to five nuclear bombs (warheads). Each of these bombs is around eight times as destructive as the bomb which flattened Hiroshima in 1945, killing over 140,000 civilians. One Trident submarine patrols the seas at all times.”

For Nagasaki
And all the victims of war
We challenge Lockheed