13 year old Yousuf currently representing England at the European Union Youth Championships in Austria was attacked today during a chess tournament by an Adult female, Brigitte Weaver, a member of the England chess delegation. 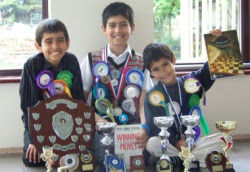 The Norfolk family's 3 sons Yousuf, Ibraheem & Ieysaa were invited by the English Chess Federation (ECF) to represent England in Mureck (31st July - 8th August 2012) and are accompanied by their mother, Tomasina.

Last week, the children’s father Sohale, raised his concerns to Phil Ehr, Director of Junior Chess and Education of the ECF about the alleged racist behaviour and treatment of his wife and son’s in Mureck, by other members of the England chess delegation. On 7th August 2012, due to an escalation of the situation and his concerns for the safety of his family, Sohale made a public appeal and wrote: ‘Unfortunately, other members of the England team have taken a violent dislike to this Muslim contingent. The boys aged 13, 10 and 7 have not been provided halaal food and were expected to eat cold boiled eggs and bits of bread. They have had to ask their coach not to drink alcohol while teaching them chess and they have had to sit segregated from the rest of the England contingent because the delegation is unwilling to give up alcohol. Matters have been so stressed that my wife has been publically spat at, sworn at and physically abused by parents who are part of the English delegation, called Whatley and Weaver.’

On 7th August 2012, I reported that ‘Sohale's concerns for the welfare of his wife and children in Mureck have fallen upon deaf ears. The failure by Phil Ehr to act has enabled the situation to escalate. This evening having spoken to his wife, Sohale confirmed, ‘the head of delegation, Dave Regis, advised the Muslim family not to return to their hotel because he was worried for their safety in light of physical threats being made against the Muslim family and in particular against 13 year-old Yousuf. The Muslim family had to be escorted back to their hotel by the Austrian police.’

Today is the final day of the tournament. This morning Yousuf and Ieysaa each won both their matches. After completing his game Yousuf went to watch his brother Ibraheem play. His path was physically blocked by Brigitte Weaver. As he went to walk around her she assaulted him. 'She dug her claws into him and pushed him about. He has suffered abrasions, bruising and bleeding.' This morning Sohale confirmed:

‘It is with utter disbelief I inform you that today my son Yousuf has been physically attacked by Brigitte, the mother of Lauren and Tess Weaver in the tournament hall of the EU Youth Chess Championships. Yousuf has suffered bruising, scratches and is bleeding.

I trust you all agree that this cowardly, racist attack on a child cannot be condoned under any circumstances.

Clearly, the English Chess Federation have completely failed in their duty of care

http://www.englishchess.org.uk/?page_id=79. Their failure to heed the request to remove the Whatleys and Weavers has directly resulted in this incident.

During this tournament Yousuf has been fasting in observance of the month of Ramadaan. The temperatures in Austria have been in excess of 35 degrees daily and Yousuf is in a dehydrated and weakened state. Yet in accordance with the requirements of Ramadaan he did not retaliate but just suffered the physical abuse.

The police in Austria have been called and no doubt the UK police will be informed so that Brigitte can be arrested as soon as she arrives on UK soil. Unfortunately, the Austrian police cannot do anything without a hospital report so Brigitte is making immediate arrangements to flee the country, like a criminal, this morning.’

The family have had to fund the full costs to allow their children to participate in this tournament, as the ECF does not receive public funding to do so. The ECF has organised the trip for the England Delegation and the family has paid approximately £2,800 plus the costs of flight, which the ECF confirmed will include all costs of the trip for example, accommodation at full board (breakfast, lunch and dinner) and transfers etc. The family are Muslim and Tomasina wrote to the ECF in advance to inform them of their halaal dietary food requirements and requested that should they have any questions on what that is, they contact her. The ECF did not advise of any concerns.
In an email sent to Phil Ehr on 4th August 2012, Sohale wrote:

‘Once again, my children have not been provided a suitable meal. They are being served pork and other non-halaal foods …You were advised at the outset about my family's dietary requirement - why is it not being met?’

The children are home schooled, disciplined, high achievers and involved in community building projects. For example, StreetChess, an initiative pioneered by their father to promote chess and make it more publically assessable, is currently in its infancy and invites members of the public to play chess in town centres and shopping centres. Yousuf, Ibraheem and Ieysaa have trialled the project with great success.

director.juniorchess@englishchess.org.uk), one such email has been kindly sent by Reverend Ray Trudgian from Kings Lynn:

‘Dear Phil Ehr, Sohale has written to me with great concern about the treatment of his family at the EU Youth Championships in Austria. Obviously I hope that steps can be taken to resolve the matter and a way of reconciliation can be found. I know the family well as they play an important part in buildings bridges between Muslims, Jews and Christians here in North Norfolk. The public especially appreciate the way Sohale and his children participate in the Holocaust Memorial Service each year and I am very sad to hear about them being treated in an abusive way after all they do for reconciliation here. Yours sincerely, Revd Ray Trudgian, Methodist Minister.’

I am very saddened to hear of the abuse this family has suffered whilst trying to compete for England. I have previously written about racism and prejudice as an ethnic minority born and bred in Britain. As a result of racist incidents you learn to keep quiet, try not to show your differences, attempt to be the same to the extent that you tolerate your white British ‘friend’ in your company, calling a stranger a “paki” and then turning around and saying to you “not you, you're alright, you're one of us”.

Racism in Britain is rife. For integration there must be respect and acceptance of the differences between individuals.

It is clear that this is a Muslim family that believes in community, growth and respect of others. They have the courage and resolve to ask that their own values are respected. In doing so here, it has seemingly singled them out and made them a target for abuse.

I understand that many parents, not just Muslim parents, are not prepared to allow their children to be in the company of adults drinking alcohol. Just as one may not like their child to be in the presence of those smoking marijuana. Consideration must be given to whether, in educational ‘field trips’ organised for children, it is appropriate and acceptable for the adult contingent to participate in social drugs and alcohol when in the presence of children. Presently the UK government is driving to cut binge drinking in youth.

Ethnic minorities are poorly represented at high level in sport. In order to live in a country without discrimination and enable it to present equal opportunities to all, facilities and opportunities available need to be presented in a manner which allows all individuals to reasonably participate.

Please email your concerns directly to:

The Director of Junior Chess and Education of the ECF, Phil Ehr – Email: (

The put up and shut up attitude will not suffice, it does not allow for progression, change and a more tolerant and equal opportunity life for all of those living in Britain.

Assalamualaikum, peace be upon you