Birmingham has the highest rate of homelessness in the country and the West Midlands the highest rate of any region outside of London. With hostels and housing services struggling to keep up with the demand for shelter and support due to average funding cuts of 15% and the loss of 1 in 10 staff the people most in need of support, often with mental illness or substance abuse are not getting the help they need. On top of this the government has forced though a law to make squatting residential properties illegal (despite Birmingham having 11,924 empty homes) meaning there is currently a real homeless crisis in Birmingham that could get a lot worse. Especially if the 34,000 people in Birmingham who claim housing benefit find they cannot afford to pay the rent as Housing Benefit is slowly replaced by Local Housing Allowance and cuts to child tax credits go ahead. 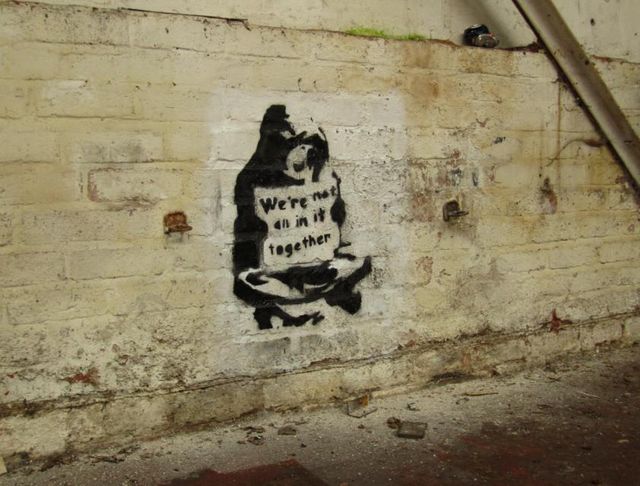 Graffiti - Homeless person - We're not all in it together

The Housing report for 2012, compiled by National Housing Federation, Shelter and Chartered for Institute of Housing identifies that under the coalition over crowdedness has worsened, homelessness has increased, rough sleeping has rocketed and cuts to housing benefit will greatly exacerbate the problem, especially with rent continuing to rise in the private sector. It also notes that although arrears and repossessions appear to be falling slightly, the Council of Mortgage Lenders has decided to stick with its original forecast of 45,000 repossessions during 2012, a significant increase on the 36,200 recorded in 2011. On top of this plans to cut the legal aid budget by £350m could lead to more than half a million people losing help with legal costs, with the impact on home owners and tenants who face losing their homes yet to be determined. There has been a big increase in the number of Housing Benefit claimants with in-work households making up the biggest share of this increase.

“The dangerous cocktail of cuts to housing benefit and spiralling rents is making finding a decent home increasingly unaffordable for families across the country. Those unable or unwilling to move away from their local area may be forced to overcrowd or accept a home in appalling conditions to make ends meet.”

Research carried out by the Chartered Institute of Housing for the Guardian newspaper has analysed the impact of caps to the local housing allowance on homes across the UK. It found 720,000 homes will become unaffordable to those on low incomes in England, 60,000 in Scotland, and 30,000 in Wales.

In Birmingham 34,500 housing benefit claimants will be chasing 23,000 low-cost houses, according to the analysis, carried out for the Guardian

Leslie Morphy of the charity Crisis said: “The figures make clear that there will just not be enough properties anywhere that are affordable on these reduced benefit levels. With unemployment rising and more people relying on housing benefit, yet soaring demand for properties, the government’s plans just don’t add up – we urge them to stop and reconsider.”

Another recent study revealed that homelessness in Birmingham has increased by 25% since 2009, that’s an extra 558 households. Nationally there are 50,290 households identified as homeless with some areas showing an increase of up to 600%. The study also notes that “in Birmingham, where homelessness increased 25% from 09/10 to 10/11, spend (on homelessness) dropped from £7.8m to £5.5m (29%).”

The Eviction Resistance Network state that “Those who struggle to pay their rent will inevitably find themselves and their families served with eviction notices. More and more landlords are refusing to let properties to those receiving benefit while average rents in the private housing sector continue to rise. These factors make finding a new home extremely difficult and thus homelessness is increasingly becoming a reality for many cash strapped families.”

To make matters worse, Squatting used by many homeless people as a way to keep a roof over their head without paying outrageous rent, is about to be made illegal in residential properties. The government ignored its own consultation in which 95% of responses didn’t want to see any action taken on squatting instead a clause on squatting was added to the end of the legal aid bill (under Clause 136 of the Legal Aid, Sentencing and Punishment of Offenders bill) meaning it was never properly discussed or analysed. The new law which will cost the taxpayer £790 million in the first 5 years, has effectively been brought in to keep empty houses empty (of which Birmingham has 11,924) as people displaced from their homes by squatters were already fully protected by the existing 1977 Criminal Law Act.

Birmingham Food Not Bombs is dedicated to taking direct action to provide food to those who need it, through serving hot meals and distributing produce free from the dictates of governments or market based constraints.

We are strongly against all cuts and oppose all forms of eviction especially in times of austerity and amid a housing crisis where in Birmingham there are plenty of empty buildings being left empty.

We set up food distribution outside the poshest hotel in town so that those inside are reminded of their privilege and to provide a visual reminder to the rest of us of the inequalities in our society. We collect food on Friday / Saturday that otherwise would have been thrown away and wasted, this is food that is perfectly edible and in-date, and is part of the 1,600,000 tonnes of food wasted by the food industry every year. We then start cooking it on Sunday morning and hand it out at 1:00pm at Holloway Circus roundabout outside the Radison hotel.

If you find yourself effected by these cuts and face the possibility of being evicted from your home then get in touch with the Birmingham Eviction Resistance Network (B.E.R.N) who are committed to resisting all forms of eviction