Early yesterday evening, with less than 15 minutes warning, the police moved in to take away the metal barriers that had created a pen opposite the Ecuadorian Embassy. They later appeared to be attempting to remove the vigil. 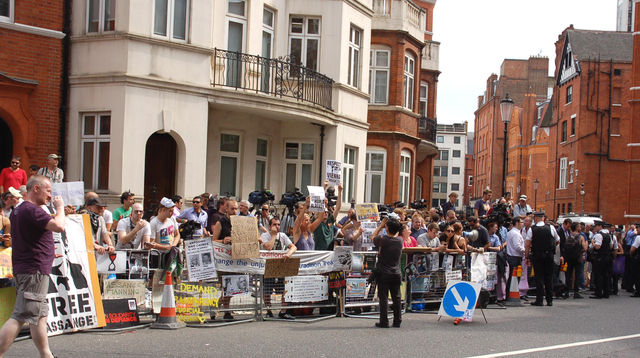 Before: the decorated barriers on 19 August 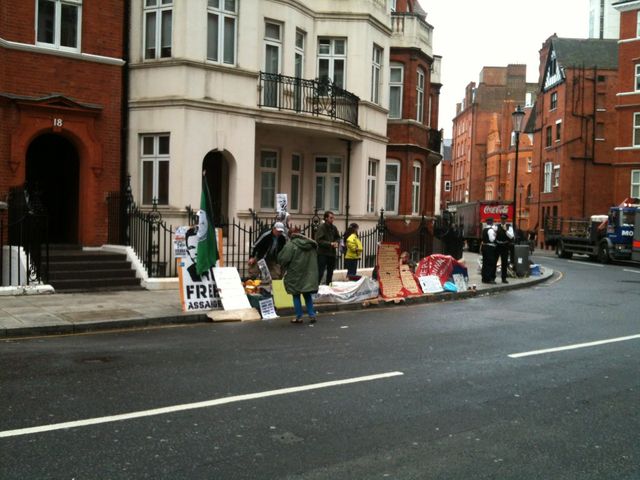 After: the vigil this morning

The barriers were originally put there ten weeks ago for the world’s media when Julian Assange took refuge in the embassy, while those standing in solidarity occupied the pavement right under the embassy windows. Later, there was a request for the vigil to move across the road into the pen and it has remained here for perhaps the past eight or nine weeks, the bare metal of the crowd barriers gradually disappearing under banners, posters, placards and other decoration in solidarity with Julian Assange, Bradley Manning and WikiLeaks.

This footage by James Albury documents what was going on several hours after the barriers had been taken away when, under cover of darkness, the cops appeared to be trying to remove those continuing the vigil on grounds of obstruction of the pavement.

"I don’t think you can have a static protest without obstructing the footpa…pavement."

The vigil remains this morning at the edge of the pavement. People are needed to help sustain the vigil as well as umbrellas and extra cover from the rain.

Please get down there if you can. The location is 3 Hans Crescent, London SW1X 0LS, adjacent to the back of Harrods and closest tube Knightsbridge.

The words of Harlon Stone, US Attorney General in 1924, are worth remembering:

"When a police system passes beyond the limit of dealing only with such conduct as is forbidden by the laws, it is dangerous to the administration of justice and to human liberty."