Block Atos and occupy Dept of Work and Pensions

400 protestors joined Paralympic ceremony performers, Dpac and UK Uncut at their "Closing Atos Ceremony" outside the Atos HQ in Paton Square, Euston today. Later 12 activists, both abled and disabled occupied and locked on at the Department of Work and Pensions and other held banners outside protesting against next April's disability cuts and the Atos tests. 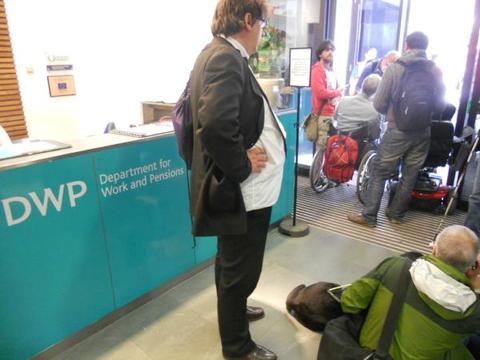 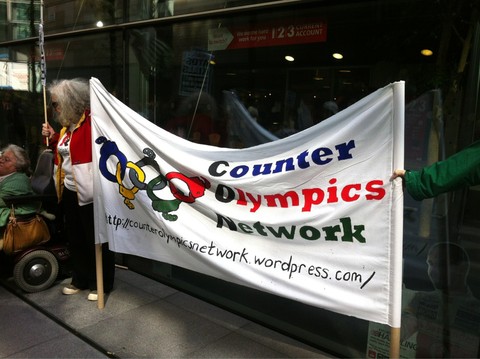 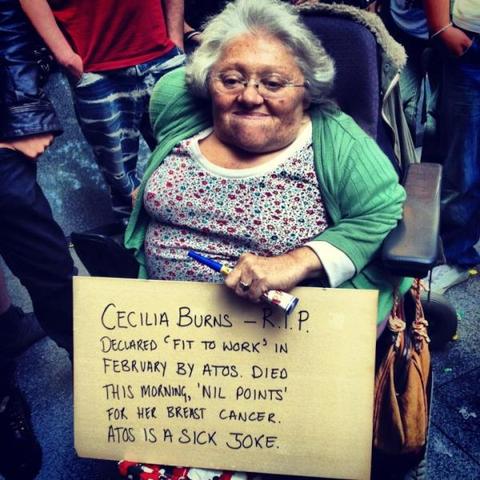 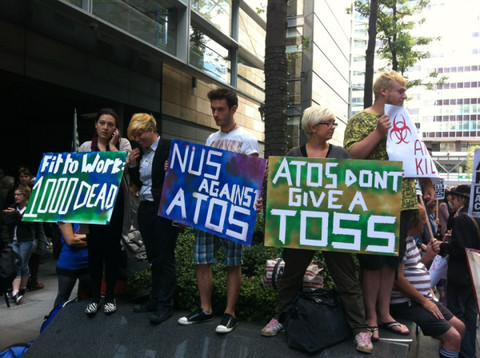 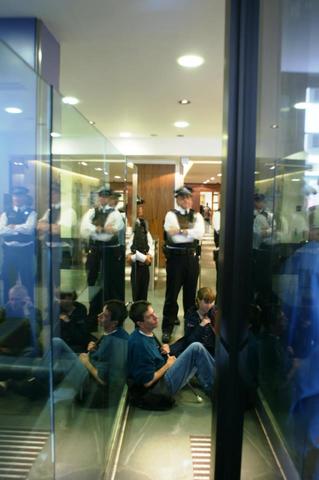 Scuffles broke out when the police stormed the building pushing a wheelchair user over later a voluntary exit was negotiated by those that were locked on. No arrests were made, however Disabled People Against Cuts (DPAC) said in a statement that one person was "tipped out of their wheelchair, another was hospitalised with a fractured shoulder and one was arrested."

Below UK Uncut give background to the action. See Video

UK Uncut Press release: Paralympic ceremony performers join disabled activists and UK Uncut to target Atos HQ in LondonToday Disabled People Against Cuts (DPAC) and UK Uncut will pile pressure on the controversial Paralympics sponsor Atos. Over 700 hundred protesters from across the UK are expected to descend on Atos’ headquarters in London to confront the company about their controversial Work Capability Assessments (WCA) which are destroying the lives of sick and disabled people.

The two groups have promised creative direct action and a surprise climax at the ‘The Closing Atos Ceremony’, which is the grand finale to a week of protests against Atos due to their role in driving through the government’s welfare cuts and the gross irony that the company is sponsoring the Paralympics.

Performers who took part in the Paralympic Opening Ceremony – who, due to contracts, have been unable to speak out against Atos – will be at the protest. High-profile comedian Francesca Martinez and Radio 4’s Jeremy Hardy will also be joining the day of action, to show their solidarity with the campaign. Whilst the discussion about Team GB Paralympic athlete’s apparent decision to hide the Atos logos on their lanyards at the Paralympic opening ceremony on Wednesday evening [1].

Atos have come under fierce scrutiny for their handling of the Department of Work and Pensions £100 million a year contract, assessing whether claimants for incapacity benefits are ‘fit for work’. Last year 1,100 claimants died while under compulsory work-related activity for benefits [2]; and a number of those found ‘fit for work’ and left without income have committed or attempted suicide [3]. A recent episode of Dispatches [4] revealed Atos staff being pressured into unfairly declaring people ‘fit for work’ in order to fulfill targets.

The British Medical Association [5], disabled groups, and MPs [6] have all demanded the work capability assessments end with immediate effect. The High Court also recently granted permission for two disabled people to bring a claim for judicial review against the Secretary of State for Work and Pensions, challenging the operation of the WCA [7].

“Atos’ sponsorship of the games is beyond a joke. They receive hundreds of millions of pounds from the government while many disabled people are being forced to live in abject poverty because of their decisions. This is just another opportunity for them to ‘cash-in’. But we aren’t going to let them off the hook. We are fighting back on the streets, online, in the courts, and now at the Paralympics. We will make sure everyone knows what Atos are really about.”

“Atos is being paid to do the government’s dirty work; kicking disabled and sick people off benefits and driving them into poverty, misery and suicide. The government is making disabled people a scapegoat for the economic crisis – they are being punished with welfare cuts, while the banks and the big businesses are getting off scot-free. The government could clamp down on tax avoidance and get back billions, rather than the peanuts from cuts to disability benefits.”

Notes to editors:
Disabled people who have undergone Atos’ WCA are available to talk to the media, please contact the UK Uncut media phone for details.

The protest will begin at 12.45pm will be at Atos HQ in Triton Square, Central London. it is being organised by DPAC, a volunteer campaign network of and for disabled people campaigning for equality and human rights for all disabled people: dpac.uk.net/about and UK Uncut – a grassroots anti-cuts direct action network, well-known for targeting corporate tax avoidance: ukuncut.org.uk