The safety of fracking will be challenged at Preston Magistrates Court today, as 3 people go on trial following a protest at Cuadrilla’s Hesketh Bank site, Lancashire, in December last year. (1) The trial is expected to last until Thursday. 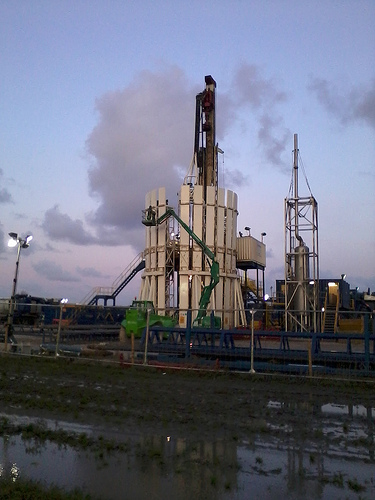 On 1 December 2011, protestors from Bristol Rising Tide occupied the test drilling rig, shutting it down for 13 hours. (2) (3)

Hydraulic fracturing is a method of extracting gas in shale rock. Huge amounts of water mixed with toxic chemicals are forced into the ground at high pressure, a large proportion of which are never recovered. This fluid also leaches arsenic out of rocks, creating a dangerous cocktail that’s difficult to dispose of. In the United States numerous spills of these fluids have contaminated irrigation water, affecting food supplies, and the health of surrounding communities. (4) (5) (6)

Rachel Greenwood from Bristol Rising Tide said: "Once fracking takes place contamination of land and water, and the devastation of local ecosystems, is inevitable. You cannot do it safely, and regulation of fracking is totally ineffective. Cuadrilla were able to continue drilling after their planning permission had expired. If fracking is allowed to go ahead in Lancashire it could happen throughout the UK."

There are twelve licenses to frack for shale gas in the UK, five of which are held by Cuadrilla resources in Lancashire. (7)

Cuadrilla’s activities are opposed both by local groups (8) (9) and climate campaigners. On 10th July 2012, three people were found guilty of aggravated trespass following an occupation of the Cuadrilla Resources test drilling site at Banks. (10) On 18 June, 20 people blockaded Cuadrilla Resource’s drilling rig at PR Marriot’s compound in Chesterfield, locking themselves to the gates to prevent the rig from being moved to Cuadrilla’s site in Lancashire. (11)

Coal Bed Methane involves drilling into coal seams to extract gas in a similar manner to fracking. A wide variety of techniques are used depending on the nature of the coal seam. If the seam is permeable enough, pumping water out of the seam will be enough to start gas flowing from the well, but if not, some sort of stimulation will be needed. Often this is hydraulic fracturing.

Because the coal seams tend to be relatively close to the surface, and because such large quantities of water are pumped out of the coal seam (water that has been marinading in coal for thousands of years), problems with water contamination and leaking methane tend to occur regardless of whether fracking is performed. (13)

There is currently planning permission for around 60 Coal Bed Methane wells in Britain. (14)

3. Photos of the action are available at:

10. The defence was supported by a number of witnesses, including academics from the UK and US and members of the local community, who testified regarding the consequences of shale gas extraction, in terms of climate change, water contamination, earthquakes and severe health effects. For more information see:

12. UK Methane have contacted Transition Keynsham to announce that they will apply for planning permission to drill a Coal Bed Methane borehole in Keynsham: