the Met say they want to protest with DPAC against ATOS

DPAC are very excited by an email we received on Saturday. We wanted to share it. The email was from someone called PS @ metpolice.uk . We suspect this is some kind of a code name because they have low esteem so they feel they are a mere post script in the letter of life. We checked the IP address and it’s in London so are in no doubt of its authenticity. The email said:

Subject Future Atos protests
Message Sir/Madame – I would like to discuss the arrangement for future peaceful protests at ATOS offices. 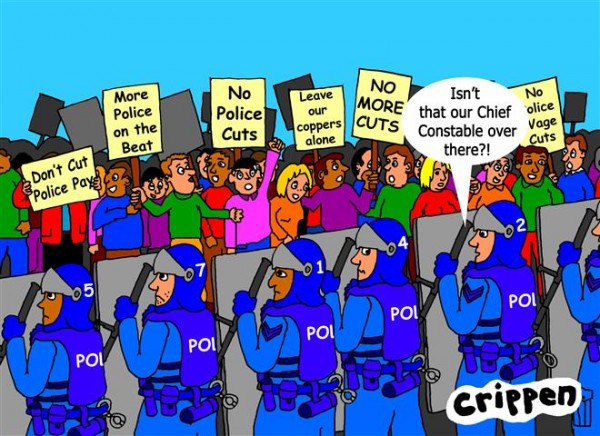 It seems the Met have realised if you can’t beat them, join them. We know some of their colleagues did try the former at DPAC’s successful action with UKUNCUT on the 31st August some in uniforms, some in their people clothes trying to excite the crowd to do things like pushing and so on. The Government are fed up with what they call the ‘disabled bullies’ and ‘savvy activists’ after all – some action had to be taken. All DPACers have expressed their intention to carry on protesting though so it didn’t really work did it?

But we are leaving the point of the excitement at the DPAC offices to post script’s email. We all had some coffee and cakes and stuff and then obviously responded to PS as soon as we could. On Sunday we wrote one of our DPAC emails saying:

There is no response from PS yet which is unfortunate as we are looking for a quote because our media friends have advised us to do this (these do not include the BBC obviously).

We suspect PS and the Met are thinking of some clever line to send to us for the media and are still in conference. Also we suspect they are overwhelmed by our generosity and acceptance of diversity not to mention our unquestionable inclusive approach to all things. We did find the Sir/Madam greeting a bit formal not to mention a tad sexist but all DPACers love to educate the public and we suppose this includes educating the Met too.

Then we realised, maybe PS hasn’t responded yet because we missed the point of the email. Remember it says ‘.. would like to discuss the arrangement for future peaceful protests at ATOS offices’. So, it seems we are to go to the ATOS offices too. We’d like you all to join us there again. This time it seems we can go inside to protest with the Met. We think this is a good thing because the weather will be getting a bit colder soon, and we all know what it’s like protesting in the colder weather. We wait for a date for our next protest inside those plush offices from PS and will let everyone know when it will be as soon as we do.

We also have to say that Camaron and his Eton buddies from the millionaires club have not been kind to the police people, cutting their numbers and making many of them redundant. Many police people will be subject to workfare type schemes in Pound Land or maybe even in some of our big disability charities such as SCOPE Leonard Cheshire, MIND, MENCAP or others involved in Disability Works UK – and Disability does work for them to the tune of £15.6 million profits, not quite as much as ATOS but Disability Works UK always like to join in on those Hardest Hit marches for some reason which DPAC still can’t fathom: the world is a strange place. If we each had these profits I dont think we would consider ourselves Hardest Hit at all.

The other reason the Met could be keen to join us on DPAC ATOS protests could be that ATOS provide a health wotsit for the police people too. It’s a lot better than ours where we are always found fit until the tribunal. In their ATOS wotsit, they must use a different computer program or something. Their one tells them tell them when they are sick or not. It’s not nice working for government, unless you’re in it and claiming £90,000,000 in expenses an average of £140,000 per MP. That was for one year into this Tory austerity malarkey in 2011. Obviously PS and buddies are as pissed off by this as we all are.

So we want to welcome the police people and say once again how delighted we are that they have seen the light. There’s just one thing we’d like to say: please don’t wear your uniforms as these can frighten people.

We know that in the past you all liked to join in DPAC protests and wear your people clothes in an attempt to gain some information on organisers and stuff, now you see how easy it really is, you really don’t have to go through all that secret surveillance undercover nonsense at all. Just drop us a line ….and why not pop by the DPAC virtual offices for coffee and cake some time too so we can discuss tactics before meeting up inside ATOS. DPAC works with the philosophy of the social model so we are all quite sociable on a good day.

image with thanks to Crippen see