Recent news that the Royal Navy aircraft carrier the Ark Royal is about to be sold for scrap metal has inspired the Earth Aid Environmental Campaign to renew its efforts to try to raise funds to buy the vessel and turn it into a floating rainforest and animal protection ship.
Environmental campaigners are seeking to raise about ten million pounds to try to buy the Ark Royal to save it from being scrapped and to take it to Antarctica as a floating rainforest full of endangered animals to try to create a brave new world for humanity and all the plants and creatures as well. 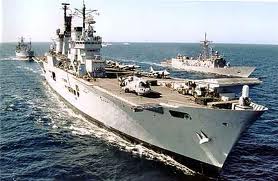 Many scientists and environmentalists believe that all life on earth, including the human race, is facing extinction this century as a result of global warming and climate change and that as the Antarctic continues to warm up quickly it is likely to become the only region left on the planet where any life will be able to survive for much longer.
With floods, droughts, famines, hurricanes, tornadoes, earthquakes, and forest fires increasing alarmingly all over the world many concerned environmental campaigners have already given up on protesting about the damage being caused by the burning of fossil fuels and they have packed their bags and left for higher ground.
The Earth Aid Environmental Campaign is appealing for some very serious and urgent support from other environmental campaign groups and organisations to help us spread the word and raise the necessary funds to buy the Ark Royal and to pay for the fuel and food that will be needed for the long voyage to the Antarctic.
All our friends are welcome to join us on this historic epic adventure to try to save humanity from being driven to extinction this century by the banks, governments, and fossil fuel industries that are destroying the earth and killing the human race.
Anyone who is interested in coming with us to the promised land and bringing their animals as well can call me personally at any time on 07883242168 (Three) or you can contact me by email or on Facebook at Nick Martian.
Thank you.