A blockade of Colnbrook and Harmondsworth detention centres on Wednesday (19 September) held up the UK Border Agency's planned deportation of Tamil refugees back to the killing fields of Sri Lanka. With one person D-locked under a deportation coach, the blockade held for 3 1/2 hours, long enough for the deporters to miss their flight slot and for 35 people to get off with legal injunctions. 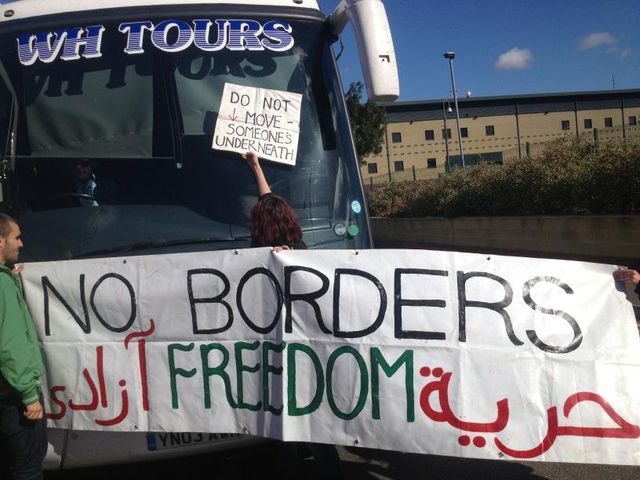 At 2.30pm on Wednesday, 60 Sri Lankan nationals, mainly Tamil, were due to be deported to Colombo from Stansted airport where they faced a very real risk of arrest and torture on arrival. [1]

However, at 11am, as one of the WH Tours coaches of deportees emerged from Colnbrook and Harmondsworth detention centres headed for the airport, around a dozen people rushed to stop it. One of them climbed under the coach and attached their neck with a bicycle d-lock to the underside. Supporters immediately held up a sign telling the driver not to move as someone was under the coach, and recorded themselves explaining this to him. The coach then remained stationary for 3 1/2 hours. The engine was kept running: according to the driver, turning off the ignition lowers the suspension and could result in the person being crushed. This may seem dangerous for the person involved, but it was a much smaller risk than that faced by many of the people on the coach who feared torture or death on return.

Police were on the scene very quickly, but spent most of the time waiting around for the specialist cutting team to arrive. The Reliance screws on the coach drew all the curtains to stop detainees having any contact with the world outside, but the blockaders attempted to communicate with them by chanting in English and Tamil. At midday, one man inside could be heard making desperate and muffled appeals for help, and the gagged cries
of "help me!" could be heard for a distressing 15 minutes. The police were stood next to where the cries could be heard as this was near one of the emergency exits. Yet when repeatedly asked to investigate what was happening and reminded of their duty of care, of the death of Jimmy Mubenga, and of the potentially fatal restraint techniques used [2], Constable Park simply replied that the Reliance guards were taking care of the situation. After around 15 minutes of this the man went silent. Supporters are still trying to find out what has happened to him.

At 13.42 a notice was read under Section 14 Public Order Act 1986 imposing conditions on the demonstration to prevent it interfering with the "lawful removal" of detainees to torture cells: limiting it to 15 people, moving supporters to the other side of the road and allowing them to remain there until 3pm. Police presence increased significantly, the cutting team finally arrived, and a small Reliance coach had been brought in. As the person under the WH Tours coach was boltcropped out Reliance screws, and apparently detainees, were transferred onto the Reliance coach. At 2.30pm the blockader was cut out and arrested and the Reliance coach left for Stansted. It seems though that the Home Office missed their 2.30pm slot for departure, having been held up by 3 1/2 hours.

Meanwhile, news had emerged that three injunctions had being granted that morning, on the back of which a flurry of others were being won. We later heard that 35 people in all had their flights cancelled. According to the BBC, 25 (out of 60) were still sent back, 13 of whom are Tamil. [3].

It is interesting to note that despite the presence of Channel 4 News and Al-Jazeera camera crews throughout much of the action, reports of the action were - as ever - filtered out of the final stories, which preferred to focus exclusively on the marvel of the great British justice system, rather than people taking the law into their own hands.

Deportations to Sri Lanka resumed in June last year following a suspension since April 2009 at the height of the genocide against Tamils in the country. Since then, successful last-minute (same day) legal challenges have been made for a number of individuals due to be deported on these flights. On the last charter to the country in May, 40 people won successful injunctions, and the coach was held up by half an hour by a spontaneous sit-down protest by friends and family of the deportees and supporters [4].

The blockade on Wednesday showed how solidarity can be successfully put into practice. In this case, it was a combination of direct action and legal action that lifted the immediate threat of torture and death hanging over 35 people. After lawyers got three people off in the morning, the blockade bought vital time for further legal challenges. Tamils and supporters stood (and lay down under a bus) side by side, and showed what we can do when we unite and refuse to allow a vicious state to treat human lives like dirt. We hope that others will be inspired to take further actions in future in solidarity with all migration prisoners and people facing deportation.

The comrade D-locked to the bus has been charged with three offences, and faces two separate trials: one before a jury in the crown court (for "causing danger to road users"??!!); and another in the magistrates court (obstruction of the highway, and failing to observe a section 14 order).

Top flippin work from you all. Brilliant. Hope the arrested person gets lots of support from everyone who read this report and was moved by the great solidarity work!

Liberal democracy in a nutshell. On the one hand, wait more than 3 hours for a health and safety trained specialist to use a pair of bolt croppers. On the other, perfectly happy to send off 60 dark-skinned furriners to their deaths. Words fail. Well done on no borders people though.

>> Liberal democracy in a nutshell. On the one hand, wait more than 3 hours for a health and safety trained specialist to use a pair of bolt croppers. On the other, perfectly happy to send off 60 dark-skinned furriners to their deaths. Words fail. Well done on no borders people though.

It shows the difference between the two countries. Here, we look after people's welfare by ensuring a correctly trained person removes the bolts. Over there, they just kill you whether you like it or not. Which is the better country? Ours of course!

Think you missed the point microbe. "We" don't have torturors based locally in the UK, just like there's no more manufacturing industry, because it's outsourced to other countries in the "developing" world. That just means british state officials don't actually have to do the dirty work themselves, but they still sign the orders. Which is better?

Matters arising out of the injunctions

All injunctions this time around were obtained because of association (real or percieved) with the LTTE. Possibly all of them last time around too.
According to the Sri Lankan government many international officials who had questioned Sri Lanka are supporters or on the pay roll of the LTTE! UN High Commissioner for Human Rights is a notable official accused of being a 'terrorist'.

International Tamil diaspora that is not towing the line of pressure exerted by the US and India in an attempt to let the current Sri Lankan regime off the hook especially for the most serious international crime committed this century is threatened by the deportations .

Well done all especially theTamils who had turned up to the action despite the many odds, threats and sensitivities that have traditionally prevented crying out the truth.

big love to ya all