Five Occupy London supporters viewed as a threat to the reputation of the UK economy have had the cases against them thrown out of court – with every single arrest deemed unlawful by the presiding judge.

District Judge Lachhar at Hammersmith Magistrates’ Court in West London dismissed the case this week (19 September) against the M12 five who were arrested by the Royal Exchange, just over the road from the Bank of England on 12 May, at a peaceful Occupy London event.

This event, dubbed ‘Meet the 1%‘, aimed to highlight how City institutions which helped to cause the economic crisis are continuing to profit whilst the rest of society faces austerity cuts, and was timed to coincide with an international day of action marked in over 380 cities worldwide. [1] 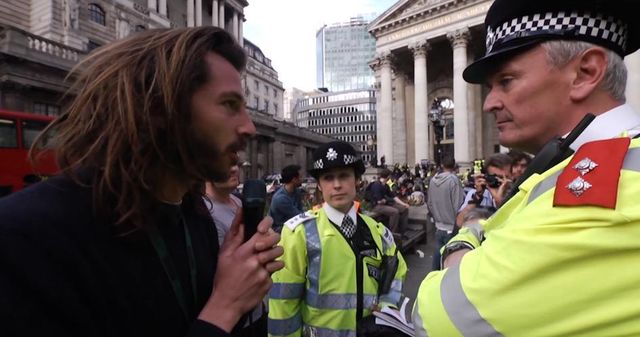 A video released by Occupy London, also shown in prosecution evidence, illustrates that the arrests made on the day were achieved only with considerable force, while the protestors remained peaceful throughout. [2] This video by You and I Films and two others by Polly Tikkle Productions are below which show raw footage of the day and the arrests.

This video by You and I Films and two others by Polly Tikkle Productions show raw footage of the day and the arrests.

Occupy Global Day of Action #Occupymay from You and I Films on Vimeo.

Following the prosecution evidence on day two of the trial, Judge Lachhar dismissed the case commenting: “”Having heard the evidence it seems to me that the Officers should have, as part of their duty, told Defendants why they were being arrested. They should have been cautioned.

“As far as Officer Taylor is concerned he was clearly able to have a conversation, but was not able to give details about arrest which is worrying. Directed on the evidence before me, as far as I am concerned, as far as the arrests are concerned, they are unlawful. These defendants should have been told the reasons for their arrest, using the 5 stage process that Chief Inspector Hancock had talked about. It is clear that these defendants were not being threatening, violent or aggressive and therefore they should have been told. There were enough police officers in formation there. So I am going to dismiss the charges.”

Chief Inspector Nicholas Hancock, charged with policing the march and assembly outside of the Royal Exchange, explained that his decision for instigating Section 14 of the Public Order Act 1986, was that the peaceful assembly represented a disruption to the life of the community, the small number of local residents, the business community and city based financial institutions. Most interestingly, Hancock commented that the economic life of the City and the reputation of the United Kingdom would be damaged.

A belief in the potential for tents to cause damage was also in evidence, with Hancock stating that at a briefing in advance of the day’s events: “[Chief Inspector Matthew Burgess] advised me that one tent could be understood as making a symbolic gesture. That an assembly of several tents gathering together should be noticed as this could be understood as an intention to be establishing an encampment.”

Decisions from the top not matching conditions on the ground

“It appears that all the critical decisions had been made at the very top and that those decisions were made in advance, with the police on the ground not able to use their judgement to assess whether a crime was actually being committed,” commented Matthew Varnham, a legal observer for Occupy London who was present on 12 May. “People weren’t even told why they had been arrested, and certainly weren’t informed that they represented a risk to the economic reputation of the UK. That’s political policing and it has no place in our society.

“What happened in court was important. Not only did the judge dismiss the charges, she ruled that the police had fallen short of the standards the public has a right to expect.”

Sashy Nathan from Bindmans LLP said: “This outcome raises real concerns about the appropriateness of the policing of peaceful protest and in particular, the policing of the Occupy movement.”

The Occupy London M12 five would like to thank their legal representatives from Bindmans LLP, Doughty Street Chambers and Hodge Jones & Allen LLP for their guidance and representation in court, the legal observers including those from Green & Black Cross and Occupy London who were there on the day recording what happened and who provided arrestee support afterwards, as well as media including photographers, filmmakers and others who captured evidence of events as they occurred.

Most of all, the M12 five would would like to thank the other protestors present on 12 May for staying present in solidarity, despite facing potential arrest themselves.They have also provided vital support throughout this unnecessary process.

You and I video | Polly Tikkle Productions: Video 1 | Video 2