Philippines: The Marcos’ Legacy of Fraudulent and Illegitimate Debts

AS THE NATION remembers today the declaration of Martial Law and the imposition of the Marcos fascist dictatorship 40 years ago — we recall not only the crimes and abuses, but the valiant struggles of our people to end the tyrannical regime. 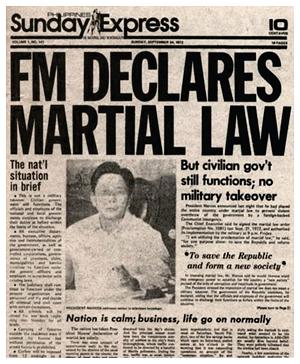 Today is a day of remembering, so that we will not forget this dark chapter in our nation’s history and will not allow it to happen again.

Today is also a day of reckoning, as we continue to pursue justice and redress for countless victims of Martial Law abuses, including crimes and legacies that continue to hound and harm our nation and people.

One of these criminal legacies is the regime’s fraudulent and illegitimate debts that were riddled with corruption and hardly benefited the people. In 1986, the dictator fled the country and left our economy in shambles, burdened with $28-billion foreign debt, from $1 billion, at the start of the Marcos’ presidency. Reports have it that 33% of Marcos regime’s loans, equivalent to $8 billion went to Marcos and his cronies pockets. Estimates of the Marcos’ ill-gotten wealth ranged from a low $5 billion to as high as $30 billion.

The plunder of our economy plunged the people into mass poverty. In 1975, 57% of the Filipino families reportedly lived below the poverty line, while Marcos, his wife and their cronies indulged in extravagance and opulence. Today, Filipino taxpayers continue to bear the cost of the regime’s foreign debts, until 2025.

Successive post-Martial Law governments starting from the Cory Aquino government not only failed to deliver economic justice to the people, but honored and paid from the people’s money the Marcos regime’s fraudulent and illegitimate debts. They continued, repackaged and even enhanced the same discredited, flawed and ill-fated economic policies and strategies of the dictatorship that deny development and dignity to the many while ensuring the benefits of the few and the powerful as well as of their foreign partners and backers.

The Aquino government affirmed the Marcos practice of automatic appropriations for debt servicing, at the expense of the health, education and basic social services that the government is duty-bound to provide for the people. This policy contributed to a perennial and seemingly vicious cycle of budget shortfalls and fiscal crises, continued debt and interest payments, increased tax burdens, increased debt burdens and severe reduction , if not criminal neglect of the welfare needs, economic and social services for the people.

The Aquino regime and successive governments, often used the budget and the debt crisis they inherited from Marcos as reasons to allow the imposition of neoliberal policies by the multinational and international financial institutions such as the International Monetary Fund, World Bank and the Asian Development Bank in exchange for more loans and other measures to ride out of their fiscal problems. They embarked, for instance, on privatization and deregulation of essential public services like water and power, cheap sale of government assets and properties, and imposition of regressive tax measures such as the 10% value-added tax (VAT) which was later increased and expanded to the detriment of the majority poor consumers. In 1992, when the Aquino presidency ended, the country’s total foreign debt increased by $2 billion more, to $30 billion. Under Cory Aquino’s term, the economy was weighed down by 17% inflation rate, 10% unemployment and 65% of Filipinos who considered themselves poor.

The governments’ stubborn policy of debt repayments and their inability to spend and invest have consigned our country not only to debt burden and debt trap, but also economic stagnation, relative to its ASEAN neighbors. Between 1990 and 2005, for instance, the Philippines’ average annual GDP growth rate was the lowest in the region, according to former FDC President Walden Bello. Between 1986 and1991, the country reportedly averaged a negative $1.5 billion transfer of resources to the creditor countries each year.

Moreover, post-EDSA governments have been increasingly contracting new loans from financial markets in the form of securities. These new dimensions of indebtedness render our economy more vulnerable to the complexities and vagaries of the global financial system.

Today, under the Aquino government, with its “Matuwid Na Daan and Inclusive Growth” policies, the country’s foreign debt stands at a whopping $62.9 billion. For next year, P810.233 billion is earmarked for both interest payments and principal amortization.

The continuing failure of the P-Noy government to prioritize the people’s needs and welfare over debt servicing is not only a failure to rectify the Marcos misdeeds. It is also a continuing economic injustice to the Filipino people perpetrated by the subsequent post-Martial Law regimes to this day. Every hard-earned peso of every Filipino taxpayer paid to service the country’s debt, means every peso of unfulfilled obligation of the government to its citizens and people. This Social Debt to the people by successive governments must be repaid. As of the end-2011, each Filipino, from the new-born to the dying owes P79,885.18 in public debt and is forced to pay P7,544 annually to service the debt. For this year, the Philippine government spends P1.4 million per minute of the people’s money for debt servicing.

Today, under P-Noy’s term at least 23.1 million Filipinos consider themselves poor, with the bottom 30% of our people subsisting on a meager P173/day.

Today, as Martial Law victims and survivors continue to demand justice and compensation for their sufferings, we at the Freedom from Debt Coalition (FDC) join hands in calling for economic justice and freedom from debt bondage and burden for the Filipino people. No to automatic debt servicing at the expense of people’s rights and welfare! Yes to repayment of Social Debt to the people!