This morning activists and anarchists have rallied round to defend Gremlin Alley, the squatted bowling alley and cinema on City Road, in Roath, Cardiff.

The eviction resistance is also in solidarity with Alex Haig, the 21 year old squatter who was the first squatter sentenced to prison under the new anti-squatting law, which began on September 1st this year. 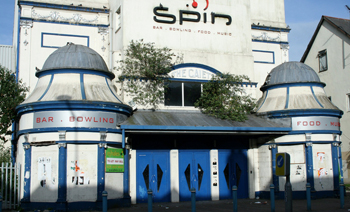 The bailiffs arrived around 10am this morning and seeing the support outside the 100 year old building, which opened as the Gaiety Cinema and skating rink in 1912, and realising they had no hope getting through, called the cops for back up.

The cops though, didn't stick around for long, and conversations were overheard about a meeting between cops and bailiffs in Cathays, the neighbouring area.

About an hour later cops and bailiffs came back, but decided against trying anything and left again shortly after. The resistance stayed strong and when two cops came back to try and talk to the resisters were politely told to "go and fuck themselves".

The state tries to make people homeless, anarchists have no sympathy for the state and it's lackeys.

UPDATE: 12:05pm lots of cops just arrived. Stand by for an update - together we are the resistance!