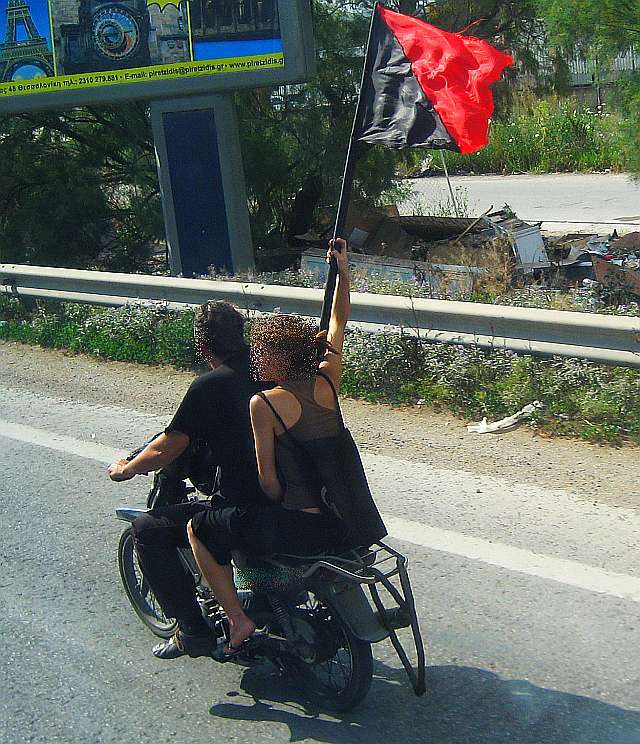 
Although three days have already passed since our arrest during the antifascist motorcycle demo and flypostering (on Sunday 30/9), we think it’s good to clear up a few things even now.

After a manifest call-out on Sunday 30/9, an antifascist motorcycle demo and flypostering took place in downtown Athens, which started off from Exarchia. This demonstration came as a response to fascist pogroms and attacks against immigrants that are carried out in several areas of central Athens by fascist gangs, who are disguised as ‘committees of residents or shopkeepers’ and act with the assistance of official state gangs.

Right now, we’re not interested in analyzing or explaining here the given and hackneyed relation of Golden Dawn/Chrissi Avgi with the Greek Police.

Just after the patrol was attacked by Goldendawners(-citizens), there was an onslaught by cops of the DELTA motorcycle police unit, who followed the rear of the demo but also drove parallel alleys.

In the end 15 antifascist fighters were caught, both women and men. They were injured to various parts of their bodies, like the head, arms and legs, while cops also used taser guns (electroshock weapons).

We were brought to the 6th floor of the Athens police headquarters, in front of the department of state constitution protection, where the night was accompanied by beatings, threats, hair pulling, and burnings from the DELTA teams who took our picture for their private photo albums while keeping watch to us.

Threats such as ‘Now that we know who you are, we will bury you just like your grandparents in the Civil War’ are indicative of the terrorism that the cretin praetors of the DELTA teams tried to inflict on us. At the same time, we were not allowed to communicate with lawyers or doctors for 19 consecutive hours. The next day, after they made a transfer–show in order to take our suspect profiles, they ultimately brought us to the courts of the former Evelpidon military school.

While we still remained at the courts, anti-riot police forces attacked the gathered solidaritarians, beating up fiercely many of them. A total of 25 people were detained, and ultimately 4 arrestees were indicted. From the moment of their arrest, they were transferred onto the 6th floor of the police headquarters, where cops implemented a similar tactic of intimidation, including humiliating body searches. After an unprecedented vengeful decision, the temporary detention of the 4 arrestees was prolonged for three more days (until Friday), while the temporary detention of the 15 initial arrestees was extended until Thursday.

They brought us to the detention cells on the 7th floor of the police headquarters, in an overcrowded ward (intended for 30 people, while at the moment 80 people ‘live’ there in incredibly squalid conditions), in an attempt to ‘break our nerves’. However, we encountered a truly exceptional feeling of solidarity from people that have been ‘forgotten’ up to three months in this place.

Amidst the ‘economic crisis’ more and more people are driven to poverty and destitution, social cannibalism is being rewarded as virtue, fascism is raising its head in our localities and neighbourhoods, the State’s offensive is being intensified at all levels; amidst this period, options that promote self-organization, solidarity, comradeship and direct action are those that can not only stand in the way of fear, which they try to impose on our lives, but as the prospect of a different social organization.

You need to deeply grasp what fascism is really about.
Fascism won’t simply die on its own; you need to trash it.