Day of action for Jimmy Mubenga, victim of G4S and the deadly deportation machine - Friday, 12 October 2012

- A public demonstration outside the offices of the Crown Prosecution
Service (Rose Court, 2 Southwark Bridge, London, SE1 9HS) from 11am to
1pm.

- Groups and individuals around the UK and beyond are encouraged to organise their own protests and actions at relevant sites and venues. For some suggestions, see for example: 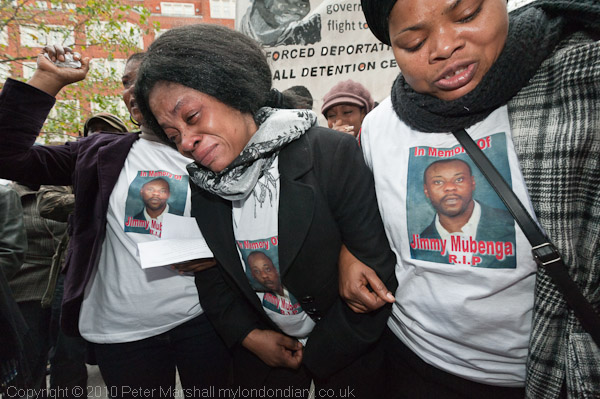 Despite several eye witnesses confirming that excessive force was used by the three G4S guards, leading to Mubenga's suffocation and subsequent death, and that the Home Office and G4S' initial accounts of what happened on board the flight were false, the Crown Prosecution Service decided in July this year, 18 months later, that neither G4S nor the guards concerned will face manslaughter charges due to “conflicting witness accounts”.

Mubenga's family, his wife and five children, were “distraught” by the decision. The former chief inspector of prisons Lord Ramsbotham condemned the decision as "perverse". An inquest examining the circumstances surrounding the death will not be held until next year. Was this a political decision? Will it serve as a licence for private 'detainee escorts' to kill.. and get away with it?

According to passengers on board the plane, Mubenga was heard pleading “I can’t breathe” and “they’re going to kill me” before he collapsed. This was not the first case where someone has died following the use of force by G4S guards: The company's management was reportedly warned by the Home Office in 2006 over using dangerous restraint techniques, of the type that resulted in Mubenga's death. Concerns had also been raised by the company's own staff.

In the weeks that followed Mubenga's death, four G4S employees secretly submitted a testimony to the Home Affairs Select Committee looking into the case, detailing “how some G4S guards developed a dangerous technique for restraining deportees by bending them in aircraft seats”. According to the whistleblowers, G4S managers were repeatedly alerted that ”disruptive deportees” were being “forced into submission” with their heads placed between their legs. The technique, known among G4S guards as “carpet karaoke”, is strictly prohibited because it can result in a form of suffocation known as positional asphyxia, skull fractures and blindness. The parliamentary report found evidence of “inappropriate use of physical restraint, and the possible use of unauthorised and potentially dangerous restraint techniques”. G4S should not be allowed to profit from torture and death and get away with it.


The day of action is called by the Stop G4S coalition, No Borders London and the Stop Deportation network. Supporting groups include Corporate Watch, the National Coalition of Anti-Deportation Campaigns, South Yorkshire Migration and Asylum Action Group, Redbridge Equalities & Community Council, among others.

The day of action takes place a week after campaigners from across the UK gathered in Sheffield for a ‘Stop G4S Convergence’, which brought together people campaigning against various aspects of G4S' unlawful activities and human rights abuses around the world. For more details on this, see