The National Gallery's long-standing sponsorship arrangement with weapons manufacturer Finmeccanica has ended, following a campaign by Campaign Against Arms Trade to 'Disarm the Gallery.' The arrangement has been terminated one year early and just weeks before the next protest event was planned. 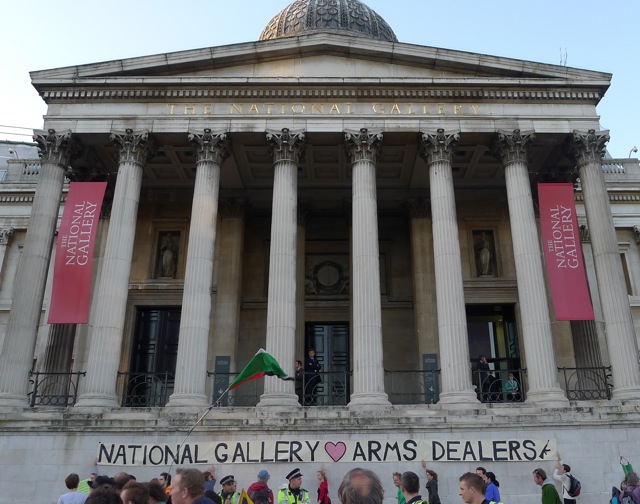 A Gallery spokesperson told CAAT that Finmeccanica had "exercised their right to terminate' the agreement, but refused to disclose what discussions had preceded this decision.

Italian weapon manufacturer Finmeccanica has been one of the National Gallery's 'corporate benefactors' since 2006. The contract was due to run until 1 October 2013.

As a result of its deal with Finmeccanica, the Gallery has hosted receptions for international arms fairs, including the official reception for London's Defence & Security Equipment International (DSEi) in September 2011 – where ten repressive regimes, including Bahrain, Egypt and Saudi Arabia were among those invited to shop for weapons.

It also hosted receptions during the biennial Farnborough International, between 2006 and 2010. Following the launch of the Disarm the Gallery campaign the Gallery announced it would not be hosting any events for Farnborough in 2012.

Thousands of people have raised their concern with the Gallery in writing and through a series of creative interventions inside and outside the Gallery. Last month, BBC3's The Revolution will be Televised featured a stunt where Peter Kennard's Haywain with Cruise Missiles was added to the Gallery's walls. Artists have supported the campaign through an open letter to the Gallery and by creating their own artworks inspired by its support for the arms trade.

"We are delighted that the Gallery's relationship with Finmeccanica has come to an end: many people were deeply concerned that an iconic and much-loved institution had chosen to support such an unethical industry. An association with such a company could only tarnish the Gallery's reputation.

"This deal gave practical support to Finmeccanica's business activities but, more importantly, the company was able to use the Gallery's facilities and prestige to give the appearance of legitimacy to its work. We hope the end of this relationship marks a recognition that arms companies and their deadly deals have no place in our arts institutions." "