Israeli Company seeking to stop protest in the UK

The CEO of Soda Club, an Israeli company with a production facility in the settlement industrial zone of Mishor Adumim, has vowed to stop the protests happening outside its UK shop.

Daniel Birnbaum told local paper The Argus today that the firm will take legal action to clear the protesters from in front of their store. 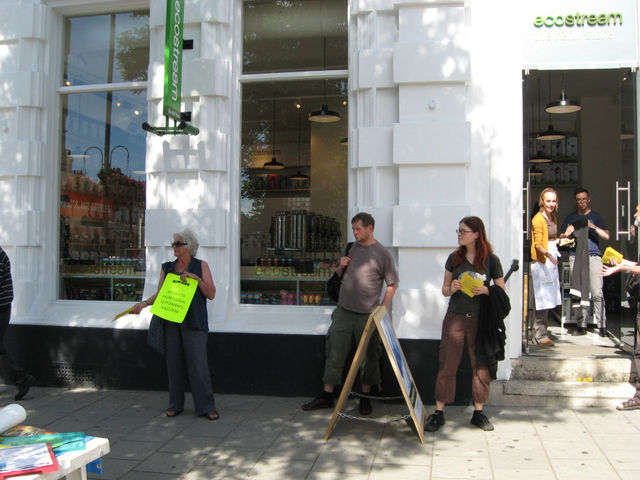 Ecostream, Soda Club’s store in Brighton has faced biweekly pickets outside its shop in Western Road by supporters of the Palestinian call for Boycott, Divestment and Sanctions (BDS) against companies complicit in Israeli apartheid, occupation and militarism. These are accompanied by smaller counter demonstrations by a coalition of Zionists and Christian Zionists handing out material from the British Israel Communications and Research Centre (BICOM) and the US based ’We Stand With Israel’.

In the interview with The Argus Birnbaum announced the company’ intention to remain in Mishor Adumim, a settlement industrial zone situated between East Jerusalem and Jericho.

to discuss their ‘concerns’ about the demonstrations. The Israeli embassy clearly has an interest in promoting this company as, in 2010, Soda Club made the eighth largest Initial Public Offering (IPO) of any Israeli company on the NASDAQ. It has been promoting itself extremely heavily in the UK with advertorials in The Guardian ,The BBC, and an interview with Birnbaum on the Today Programme

The company has divided local politiciasn with Conservative MP Mike Weatherley condemning the anti-Ecostream demonstrators, while Green MP Caroline Lucas supported the ‘right to protest’ against the company and gave some mealy-mouthed criticism of the company.

On Monday 15th October Corporate Watch will be participating in Justice for Palestine: Brighton and Boycott – Why our city should not be hosting the Israeli state-sponsored dance company (Batsheva) and a shop (Ecostream) that sells goods made in an illegal Israeli settlement”. The meeting is at 7.30pm at the Friends Meeting House Ship Street, Brighton, BN1 1AF.

At the very least that means you are an annoyance. best case scenario, you actually harm their business.

Though I have to say, I don't get the Bat Sheva thing. Why boycott the national dance company? as far as I know, they are not settlers, they don't actively support the occupation, and a few of their dancers actually refused to preform in settlements (Which is against the law now in Israel). Can someone fill me in on this? except being an Israeli dance company, did they do something to warrant a boycott?

Israeli State-funded Batsheva Dance Company, participants in Brand Israel, are scheduled to perform at the Edinburgh International Festival at the end of August and then to tour the UK during November, taking in Salford, Birmingham, Bradford, Leicester, London, Brighton and Plymouth.

Hana Awwad, longtime member of El Funoun, one of Palestine’s premiere dance troupes:
“As a Palestinian dancer based in the West Bank, I am prohibited by the Israeli government from traveling to Gaza for performances. Some of our dancers are also prohibited by the Israeli government from ever accompanying the troupe when it performs in neighboring Palestinian cities and abroad.”

Iman Fakhouri, director of the Popular Arts Centre in Jerusalem:
Two of our dance performances were cancelled because Israel denied our dancers entry to Jerusalem. Israeli forces outside the theatre were trying to remove people by force. Some people, both from the audience and the artists, were beaten up and arrested.”

Aharon Shabtai, leading Israeli poet:
“I do not believe that a State that maintains an occupation, committing on a daily basis crimes against civilians, deserves to be invited to any kind of cultural week. That is, it is anti-cultural; it is a barbarian act masked as culture in the most cynical way. It manifests support for Israel...”

Iain Banks, best-selling Scottish author:
“I would urge all writers, artists and others in the creative arts to convince Israel of its moral degradation and ethical isolation, preferably by simply having nothing to do with this outlaw state.”
Follow Don't Dance with Israeli Apartheid


Batsheva and Brand Israel
Batsheva Dance Company participate in the 'Brand Israel' initiative, which aims to create a positive image of Israel internationally by promoting Israeli culture through artists and groups such as Batsheva. It is a campaign to whitewash Israel's human rights abuses and violations of international law, creating a false image of a 'normally' functioning, democratic country.

The Israeli Ministry of Foreign Affairs fund Batsheva's international tours
This is the same government which for over six decades has sustained a system of occupation, dispossession and apartheid which has left millions of Palestinians living as refugees, often imprisoned by a matrix of checkpoints, illegal apartheid wall, militarized settlements and Jewish-only roads. Batsheva's explicit ties with the state of Israel makes it impossible to describe the group as 'apolitical'.