“Throw out the money changers from the temple”

On the eve of the anniversary of the beginninng of the Occupy London Stock Exchange camp by St Paul’s Cathedral, supporters of Occupy London, in collaboration with Christianity Uncut, today staged a dramatic intervention to highlight their call for the leadership of St Paul’s Cathedral to stop sitting on the fence and join the fight against rising inequality in the UK and beyond.

While Christianity Uncut unfurled a 5m x 10m banner outside the Cathedral urging the leadership of St Paul’s to “Throw out the money changers from the temple”, four Occupy activists staged a mic check during Evensong. [1] They are now locked on to the Cathedral pulpit not planning to leave.

For updates and images, keep an eye on Occupy London’s twitter feed (@occupylondon) and our live newsfeed at 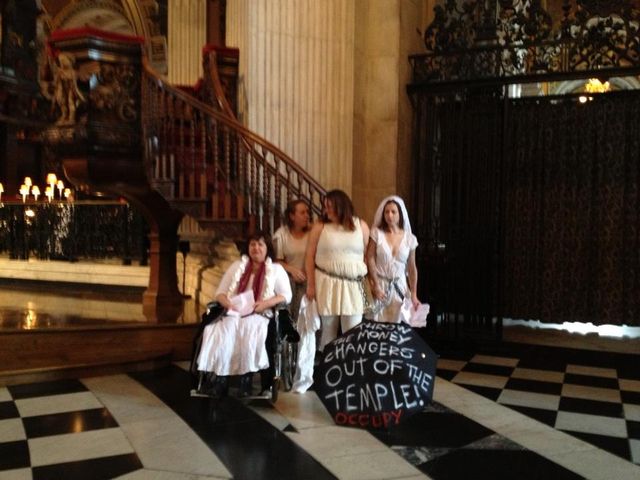 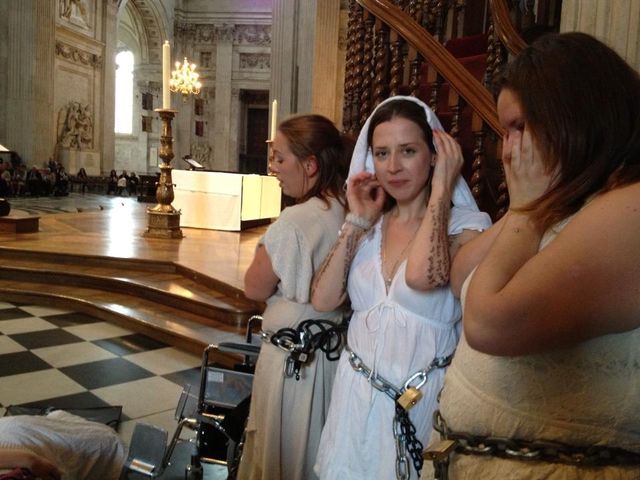 We do not wish to distress you Only to appeal to you.

Blessed are those who are persecuted because of righteousness, for theirs is the kingdom of heaven.

We stand here as Occupiers, as women, Queers, disabled, grandmas, young, old, as women of all faiths and none in solidarity with all other groups who are marginalised by economic injustice.

Even when times are good women, along with our children, are usually those who suffer the most. In times of economic crisis our inequality is amplified but we refuse to be victims.

We will not be silent.

One year ago tomorrow, Occupy arrived on your doorstep and pitched our tents in the tradition of St Paul.

We offered you an opportunity to live out our shared truth: Blessed are those who hunger and thirst after righteousness, for they will be filled.

Blessed are the merciful, for they shall be shown mercy.

Blessed are the peacemakers, for they will be called the children of God.

In the fight for economic justice Jesus threw the money changers out of the temple, but you invited them in

And instead evicted us.

Your collusion with the City of London Corporation led to our violent eviction on your doorstep.

You testified against us which acted to uphold injustice and inequality that is growing by the day.

St Paul’s Cathedral you must stand up and be counted at this great trial of history.

But you have denied us twice already.

Once when you closed your doors on us and watched on as praying Christians were dragged from the steps of St Paul’s and twice when you failed to act when we were gone.

Today we offer you a third chance. The resurrected Jesus spoke first to a woman.

He said, go to my brothers and tell them the truth. We come to you and we say, The truth is an urgent call for radical action in the Way of Christ.

There is no time left to procrastinate

Come and join us.