Our sister organisation, the Network for Police Monitoring, is launching their ‘Don’t End up on a Database’ campaign this month. In response to this, FITwatch will be producing a series of simple, easy-to-understand guides designed to help you defend your anonymity and stay off police databases this October 20th . We believe these steps should form an integral part of any protestors’ activities on the day, regardless of tactical or ideological preferences. We cannot mount a serious challenge to power until we are able to move and associate freely, without state intrusion.

Some of this may be new to you, some of it may be old. But we encourage all our readership to watch out for these blog posts in the run-up to the demonstration:

Please use social media to share and retweet this essential information. 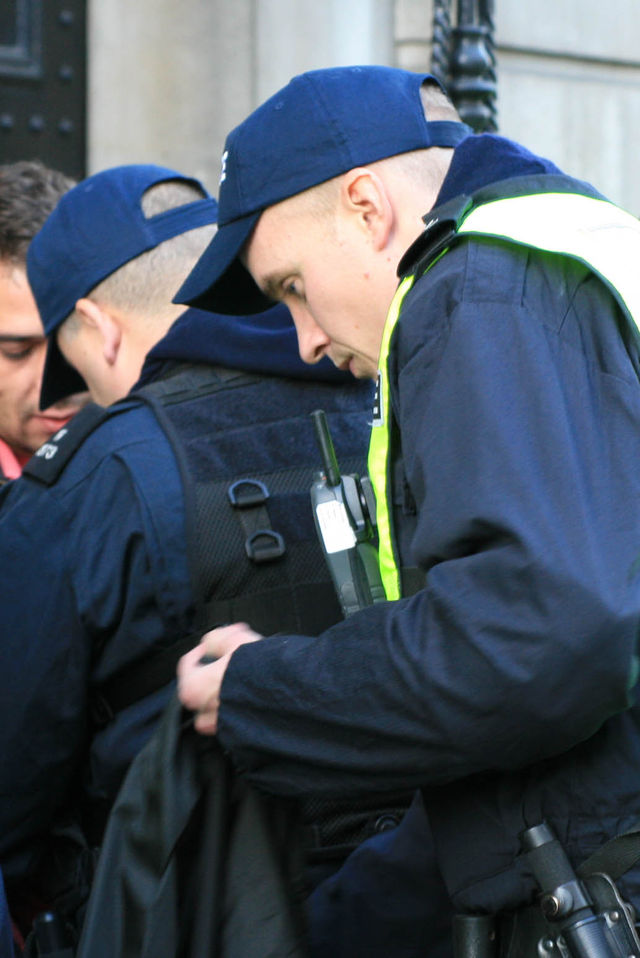 
For a long time now, FITwatch have been informing people of their right to withhold personal information when the police invoke specific powers against them. However, we acknowledge that this can be difficult to remember, especially if you are coming up against the police for the first time (which we know can be quite scary). It is also somewhat of a defensive stance, that assumes police harassment as a given.
It would be irresponsible of us not to reprint this legal information again. However, we want to try it with a new and more empowering objective in mind. This time, we should all be aiming for a collective point-blank refusal of any information to the police whilst we are on the streets. The legal information provided is designed to give you an advantage in this task – to add another intellectual weapon to your arsenal when refusing information. Until we have a culture of total non-cooperation with intelligence gathering and total solidarity between each other, we will be subject to bitter repression on the streets. We have to show them that enough is enough.

Legal information:
DO give a name and address if you are arrested.  You re not legally required to, but it makes it more likely you’ll get bail if charged. No one wants to end up in prison before they are even convicted of a crime.
DO remember if you are only arrested for Breach of the Peace, this is  not a criminal offence but a preventative power of detention.  The police should release you WHEN THE THREAT OF A BREACH OF THE PEACE HAS PASSED  even if you have not given your  name and address. Given that the police abuse this power of arrest, you might prefer to  refuse to give your name, address, DNA, fingerprints and so on.  If you are physically forced to comply you may be able to sue the police at a later date.
DO be assertive if you are stopped and searched – you are not required to give your name or address, even if you want a receipt.
DO refuse information to the FIT
DO remind cops demanding your name & address under suspicion of anti-social behaviour (s.50 Police Reform Act 2002), that they need to have a ‘reasonable belief’ that YOU have caused ‘harassment alarm and distress’ (the definition of anti-social behaviour.  Ask them what you are supposed to have done.  If they cant, tell them where to go (politely, of course!).
Protest is not enough in itself to qualify for anti-social behaviour. However, this argument will hold less water if the demo has kicked off at all.