On Saturday 13th Oct a demonstration of 300 people took over the streets in Calais to denounce the relentless harassment and attacks against ‘exiles’ of Calais; refugees, migrants, people with and without papers.

Starting outside the clothes distribution area we took the roads through town, creating a resounding carnival of drums and shouting through the pouring rain, occupying a main roundabout in town before blaring noise outside the town hall using whatever means – drums, bins, horns, whistles, sirens and bellowing chants. Undocumented kids battled over the megaphone and a make-shift samba band got people bouncing on their feet. Banners in Arabic, Pastu, Farsi, Tigrinya, Polish, Latvian, English, French… decorated amongst the crowd and sprawled across walls and buildings as we passed. The demo ended outside Salam, the food distribution area, with more drumming, shouting and dancing in the street.

News coverage from the day: 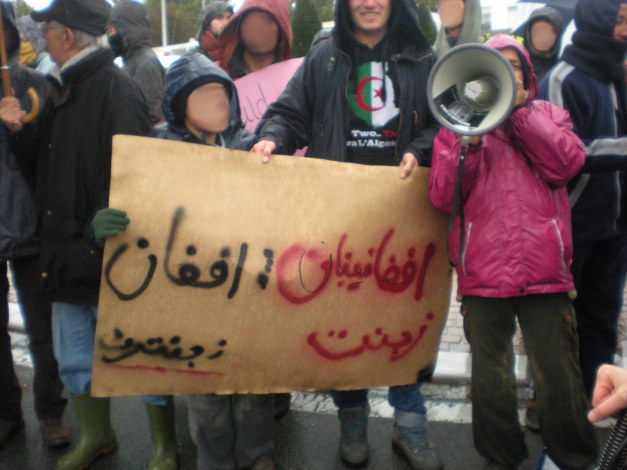 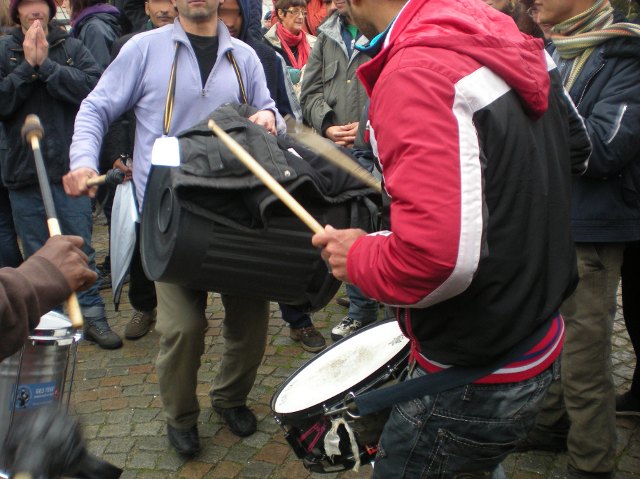 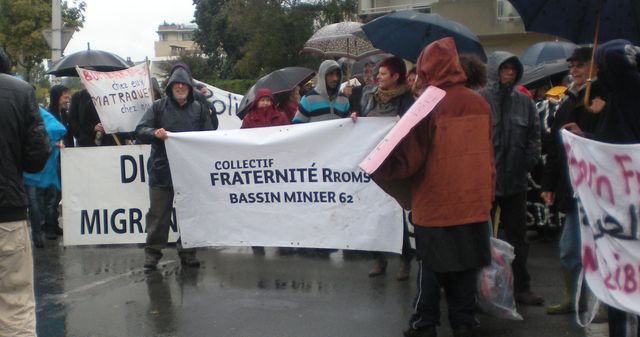 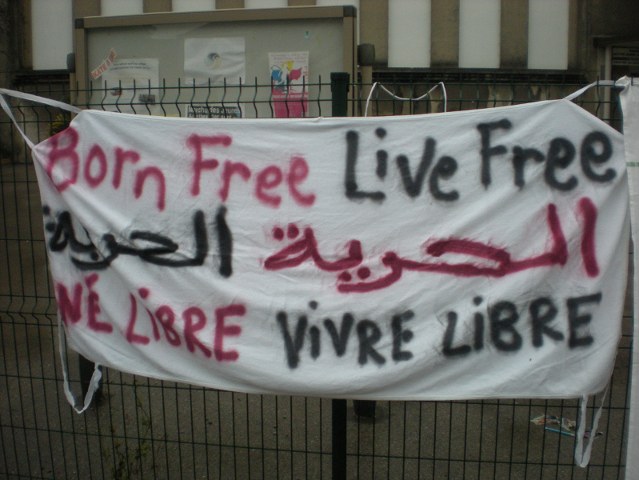 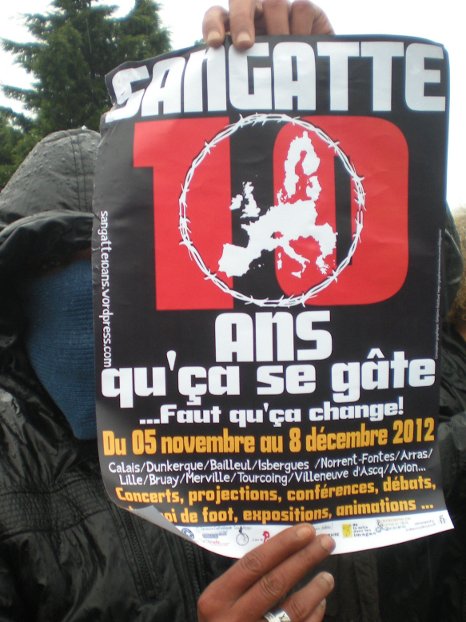 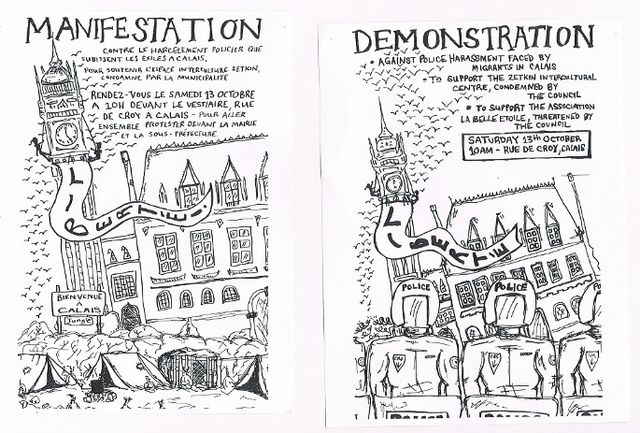 Today the city of Calais is the scene of a disgusting political strategy. Here everything is done to make migrants invisible and to exclude people from the life of the city. The daily life of each migrant is to be hunted like an animal, harassed and humiliated. We are not talking about isolated actions from the authorities but about a true political strategy in motion. The one whose aim is to torture humanity and hopes, condemning people to a life which destroys the mind and body until people resolve to asking for “voluntary return”.

The hardest life is wanting your brothers, sisters and cousins at home, to come in Europe. You have to deserve your condition of political refugee ! That’s why you must wear your burden and it’s up to the ruling authorities to decide if you have suffered enough at home and on the way which leads you to the papers to give you this “chance”, won at the price of violence, humiliations, and tortures, that the ruling authorities decide whether to appreciate.

Obviously these political choices are not only national but find a wide echo here, in the local policy. The UMP town hall is obsessed with the idea of “freeing”, “releasing”, “cleaning” the landscape of Calais, making migrants and the situation they are locked into disappear.

To achieve it, all means are used. The condition is premeditated and designed for the tragedy to happen. They want those who are only hanging to this unique hope to become a cause of insecurity for the population, and that’s why the machine of repression strikes at people relentlessly and finds its legitimacy.

A well oiled-propaganda campaign begins with the destruction of the essential needs of those we criminalise as migrants. It was frequent this year and particularly in recent weeks to see the mayor being ordered – or order herself – the destruction of shelters, personal belongings, kitchen tools, sleeping bags, blankets and the wood for the fire, just before the winter begins. By preventing people from getting those basic needs, the ruling authorities consciously catalyse the tensions between communities.

It legitimises the beatings, gassing and daily humiliations as responses to the “the public disorder” caused by human beings being pushed at their breaking point by this less than discrete will to create situation of violence. At this moment if we answered to such a level of repression with a reactionary violence it would only reinforce and legitimate stronger violence by a well-armed authoritarian system.

So our answer to this situation has been the creation of a space where migrants can freely express themselves with various workshops of language, cinema, dance, music, theatre, cooking, games, which enable us all to light up in all those details and build between our differences. A place where each person is responsible for itself in the respect of others. A place which enables people to escape from the status of victim or subhuman they are chained to as soon as they become a person passing borders. “To edify the borders, solid materials are not necessary: blood and tears are enough.”

This open space aims to defeat the strategy of invisibility orchestrated against migrants. To show to the population that Calais, because of its geographical position, is bound to be a land of transit and that it is time to accept and to take the responsibility of this identity.

Migrants aren’t a flaw in the city but a true opportunity to build a place that welcomes people not matter where they were born. It is a chance to join together a better political fabric which is not embedded with racist and nationalist barriers but accepts the presence of a population in transit and supports their integration to the life of the city as a part of the fight against the segregation borders create between people.

We should not build the identity of a town by rejecting part of its population but only with her. This is what we’ve been trying to set up this year through our different initiatives, it’s a new look on the situation. No more work FOR migrants but WITH them. Offering conditions of a safe space where people have an active role and do day-to-day activities for themselves means people can shed their status as victims and escape from their ‘illegal’ position to become People again.

For three years, relentlessly, we’ve denounced the brutality of the system and the police, trying to break through the silence and make it impossible to ignore the persecution of migrants, with practical resistance intervening in the attacks and by compiling a ‘dossier’ of abuse which has been sent to the so-called “Defender of Human Rights”, while at the same time we try to create an alternative to those politics and a place which constitutes the exact opposite of what the ruling authorities force upon us. A new safe space we created for people during the day is now being jeopardized by the mayor.

We are not only radically critical of the system but also enrolled in a strong desire to build with migrants a space where they can feel good. It’s this space they want to destroy today. And with it, all the humanity which it spread. Against the death wish imposed by the current policies we are proposing a pulse of life, a place where each skill is put forward in order to build the town with the migrants and not against them, to make what has always been called a weakness the most beautiful strength.

To understand that the presence of migrants is meaningful is to build bridges instead of walls. This call for a demonstration is not just made to defend a position of No Borders but defend a project which dreams of a city where migrants have a place.

We are all, one day, likely to be threatened by this mayor as soon as a disagreement is heard. If we do not stand together, we are all in danger. None of the charity associations, ‘La belle étoile”, “Salam” or “Le Vestiaire” are protected from the municipal by-law for non-compliance with the regulations of ‘safety’ being used to close down the spaces of migrants. For the time being you may be left alone if you try to remain in good terms with the town hall, if you do not speak out about the situation and accept quietly the mayor’s politic against the migrants. But a step out of line with her politics and you will be shut down too.

We have somehow the hope that one day all the associations will be in danger because it will prove clearly and strongly whether they can be independent towards this mayor and its disgusting politics against the thousands of people who have crossed this city. When they divide us they rule us best and satisfy their reign. The town hall amputates our ideas, steals our voice and kidnaps our actions.

Our differences are our strength and we are all marching towards a common objective. It is important to understand the policies put in place aimed at hurting one of us is damaging the struggle of all. We are all used to many years without any recognition to maintain some kind of peace. Each association in its own way is paying the price of this politic. The town hall consistently tries to undermine us working together but if each of us stands up for each other, or withdraw together, she will understand our solidarity is strong and each single part of us bares weight. Otherwise Calais will remain a gateway city with an empty stomach prepared to give in at any price.

The ruling authorities have been manipulating us for many years, it is not an exaggeration to say we can threaten them, by reacting together when they strike at one of us.

We are calling to demonstrate alongside migrants against the death wish against us and for life which drives us, Saturday 13 of October, beginning at the street of Croy in front of the Vestiaire.

And in solidarity with our common struggles on this same day:

In Germany : In solidarity with the ongoing protest marches, camps and hunger strikes of refugees in cities across Germany started several months ago, and the week long call for action and demonstrations take place from 6-13th October: www.refugeebusprotest.wordpress.com &

In France : From 13-15th October: call to a three day actions against evictions.

In England in Brighton : 13th october : Whatever they say, squatting will stay !

* Against police harassment faced by exiles in Calais

* To support Project Zetkin, a safe space for migrants shut down by the municipality

* To support the association La Belle Étoile, threatened by the municipality

Appointment Saturday, October 13, 2012 at 10am
Starting at the front of the Church on Rue De Croy Calais

After evacuation of Roma camps resumed this summer, the evictions of migrants also started, enforced by systematic violence: destroying of personal belongings, day and night harassment of people so they cannot sleep, routine arrests and deportations to other countries.

We condemn the violence and urge the government and mayor of Calais to abandon this policy.

We call for a policy of hospitality based on conditions of welcoming people, respecting persons with or without papers, providing effective access to protective measures, and the possibility for people who are moving to arise and reflect their project.

We also affirm our solidarity with La Belle Étoile and No Border, two associations engaged in solidarity actions with exiles, and threatened by the mayor of Calais.