Andy Manifold was back at Liverpool's Dale Street Magistrates' Court on Friday 19 October to hear the outcome of his trial on a charge of failing to complete the 2011 Census. Six people held a solidarity vigil outside the court beforehand. In the week that the CPS dropped charges against another census refuser in Liverpool, Andy was found guilty, fined and costs were awarded against him.

A number of people are now in the position of having fines taken directly from their benefits. As these aren't enough to live on even before any deductions, please consider making a donation to the solidarity fund if you can afford it, and particularly if you resisted the census but weren't prosecuted. Over 1 in 20 households didn't complete a census return (see this Daily Telegraph article) but only a few hundred people were prosecuted. Donation details below. 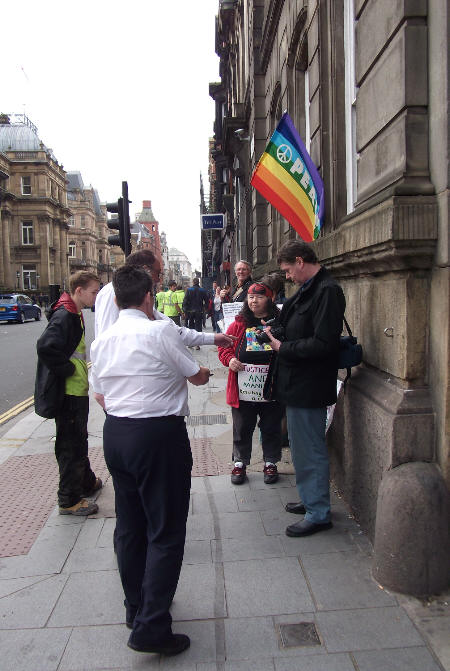 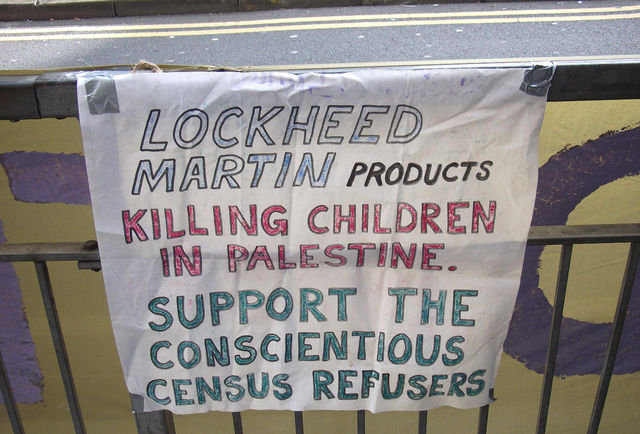 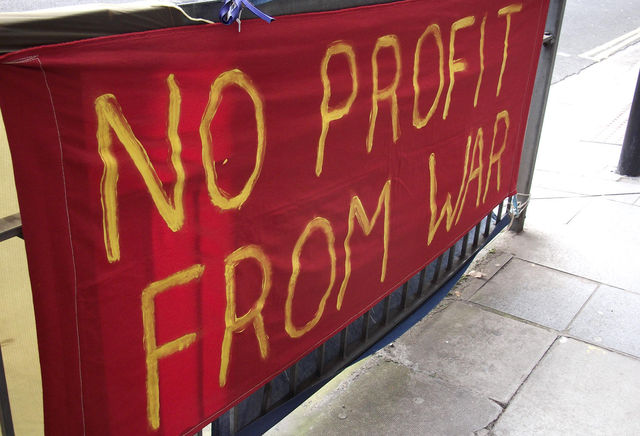 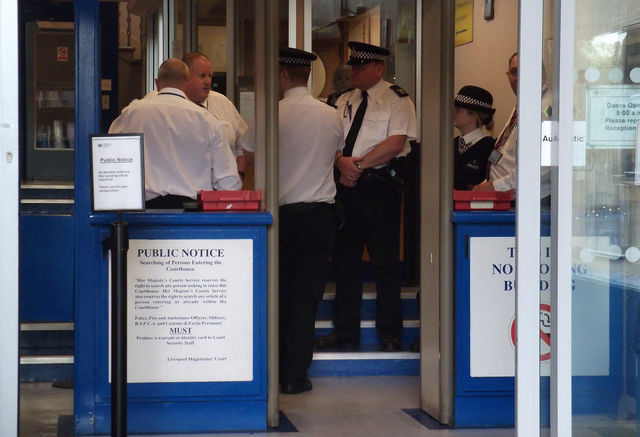 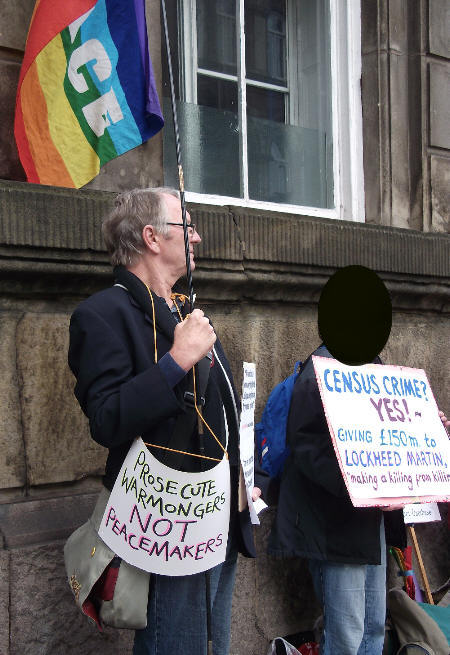 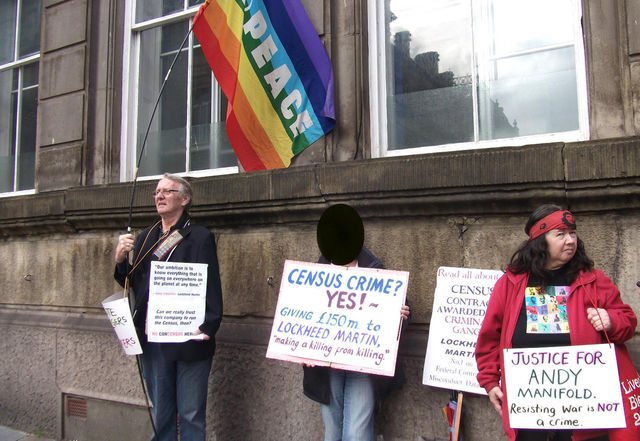 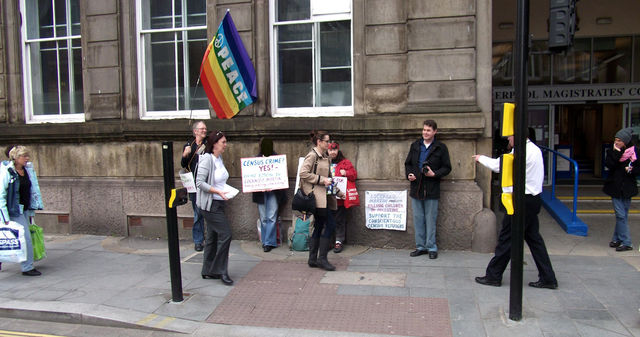 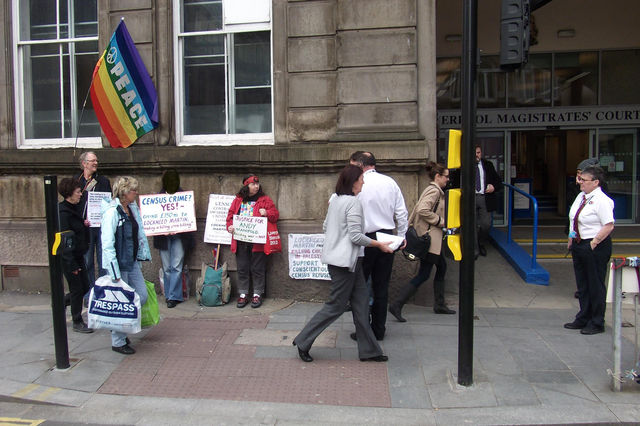 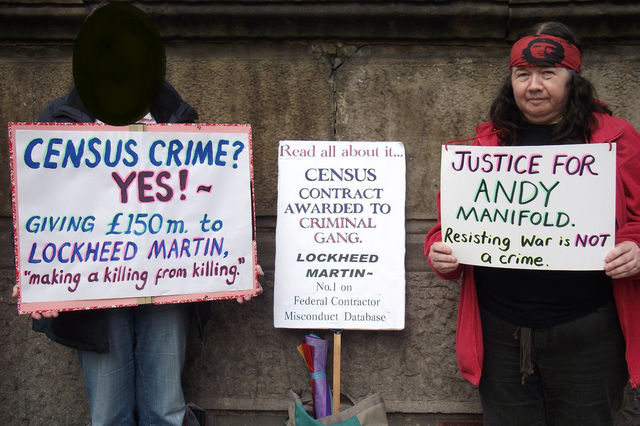 Now that some people are being forced to pay fines against their will and others are facing the possibility of fines and costs, we'd like to invite anyone who agrees with the stand they have made to contribute to offset these expenses.

Loads of us didn't complete our census forms, or defaced them, or otherwise resisted in protest at Lockheed Martin's involvement, against the surveillance state or for other reasons.
If you didn't get prosecuted, please support someone who did!

Donations can be paid into the account of Wrexham Peace & Justice Forum.

If you would like receipt of your donation to be acknowledged, please send an email detailing the date sent and amount paid to noconcensus [at] yahoo.co.uk.

Background to census refusal and reports from this and other prosecutions: Indymedia Census Topic.

We weren't allowed into the court to see injustice being done, but Andy was given £150 fine, with £300 costs and £15 victim surcharge, even though there's no victim. He has the right of appeal.

Andy's comment after the verdict was: “I won. I refused to fill in the Census form and I still haven't filled it in.” His refusal was based on a number of issues including concern over privacy and security of data and objection to the government awarding the £150 million contract to arms manufacturers Lockheed Martin to process Census data. In court during his trial, Andy said: “I just can't bring myself to co-operate with a company that relies on war for profits. Whether it's a subsidiary or not, it is still the same company; it profits from death and destruction and oppression.”

Andy's supporters were prevented by G4S staff from entering the court to hear the verdict: the security goons had created a conflict from nothing at our vigil outside the court at lunchtime and then claimed we were likely to disrupt proceedings and barred our entry.

Over the months we've been holding vigils outside the court, security staff have become increasingly oppressive and pedantic. Last week, we were shouted at to 'get that flag off the court building' when in fact it was attached to Sarah's wheelchair. This week, a small banner was briefly attached to the court wall with two tiny pieces of tape and that's what triggered the confrontation, but it was escalated to the point where the security guards were ludicrously demanding that nothing, including us, should touch the building (which is right on the pavement).

G4S also refused entry to someone unconnected with the vigil and who had just stopped to see what it was about. When we asked to speak to the elusive Court Manager who had supposedly made the decision to exclude us but later turned out to be on holiday, they called in the cops to “back them up”. Three cops arrived in two vans. They went to hear what G4S had to say and then encouraged them to ask the three of us to leave so they could threaten us with arrest for not doing so, even while we were still attempting to establish who had made the decision to prevent us from supporting Andy in court.

The Liverpool Echo recently reported that under a pilot scheme Dale Street court is going to be open seven days a week. A Ministry of Justice spokesperson is quoted as saying: “We are working with local areas to test whether a more flexible criminal justice system is able to better respond to the needs of the public.” Never mind 'more flexible' seven day opening. More flexible security guards who don't over-react and escalate perfectly peaceful situations into conflicts might be a good place to start.