despite very little publicity for yesterday's union-organised march in london, there was an impressive turn-out, with huge numbers still waiting to leave the embankment at the time the front of the march entered hyde park. as DPAC closed down park lane, and activists targetted oxford street workfare and tax avoidance stores, policing was sporadically violent, very high on surveillance, but with very few arrests. 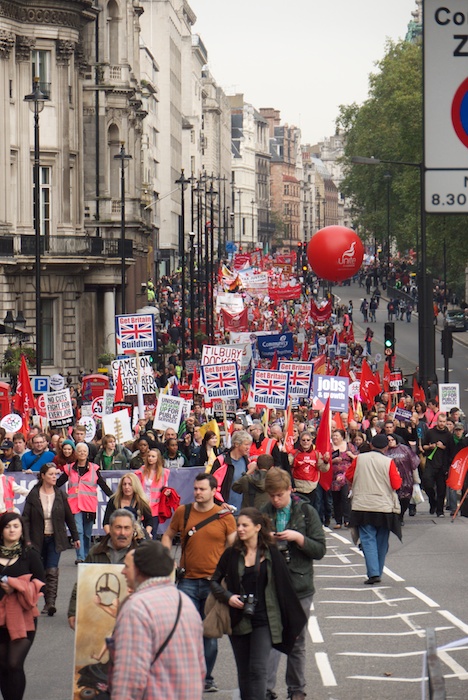 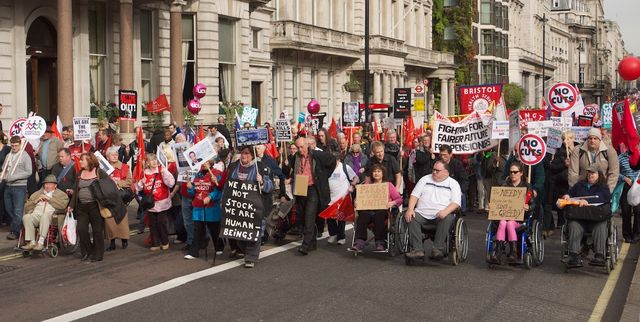 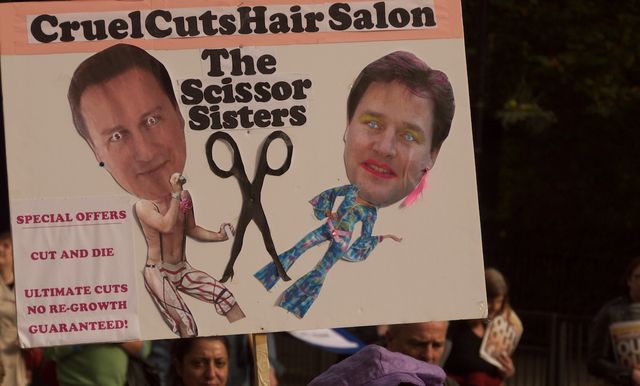 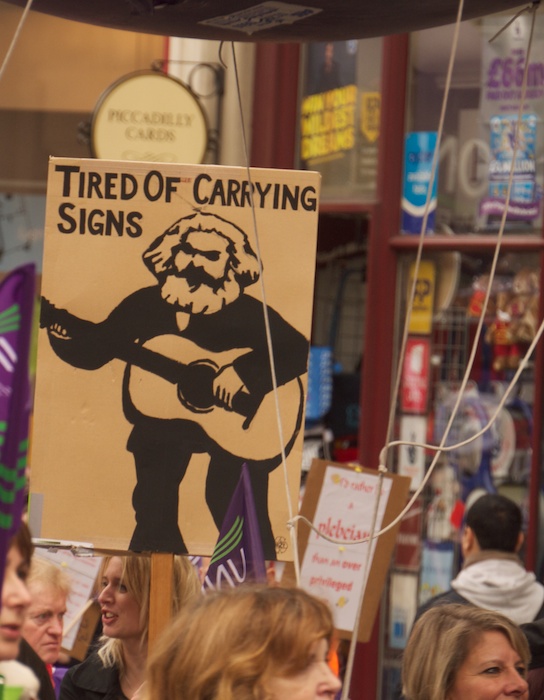 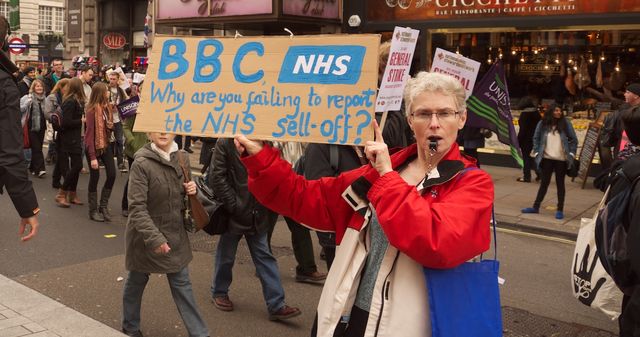 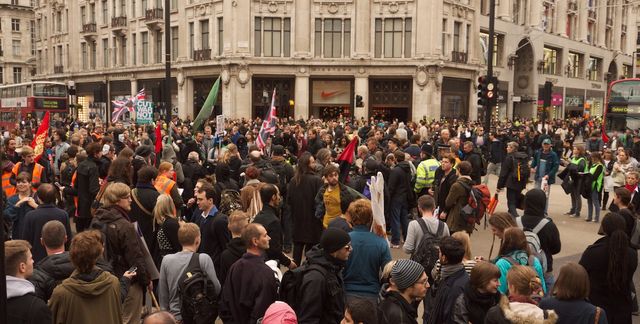 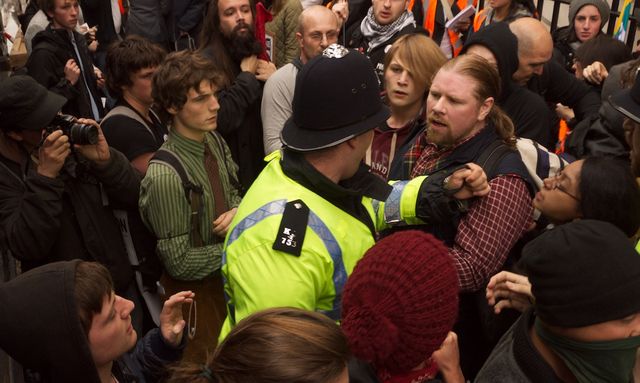 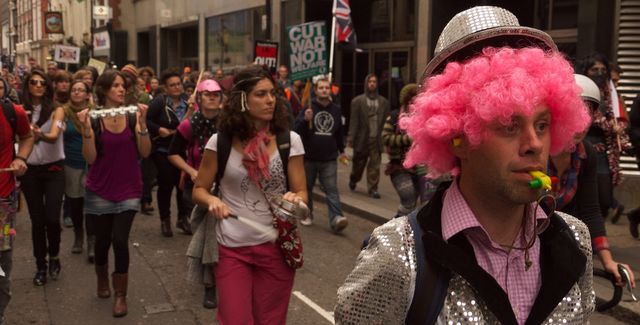 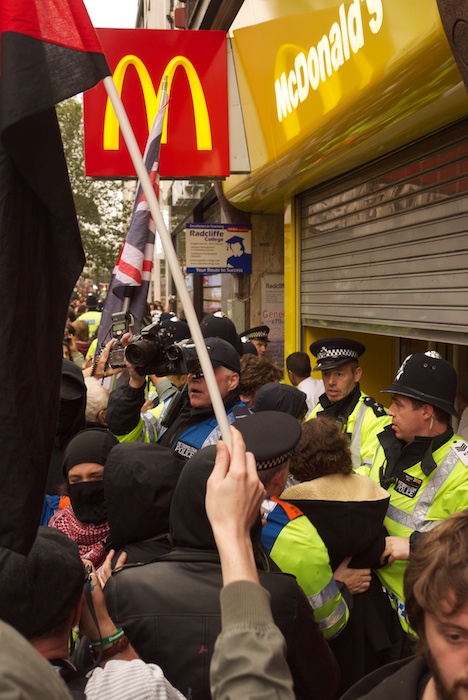 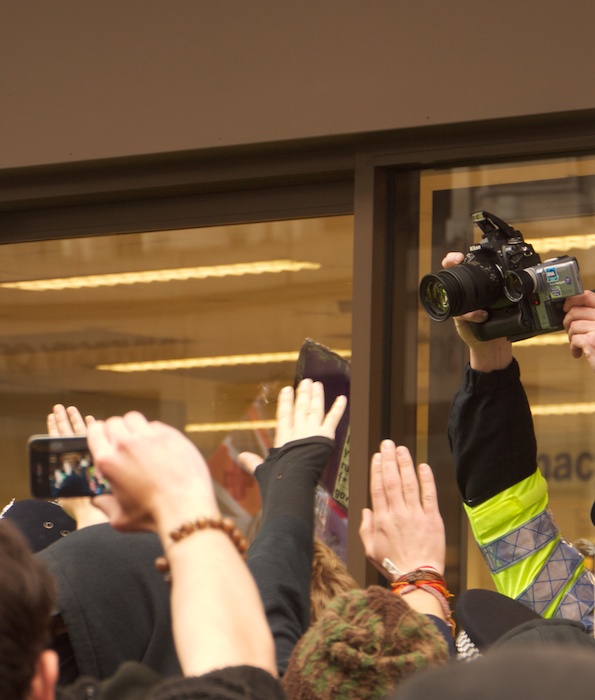 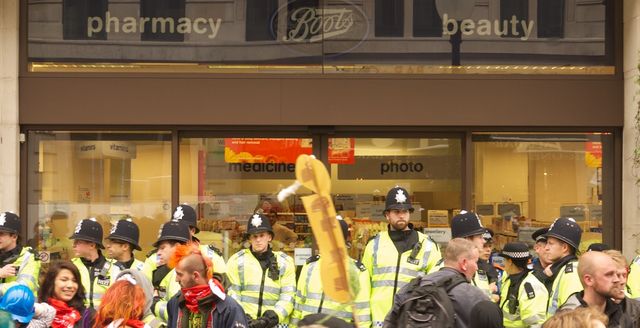 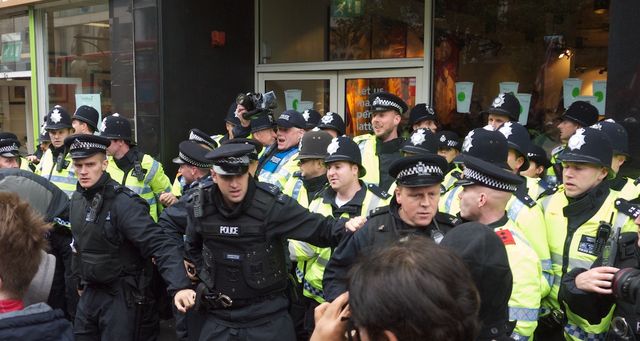 protecting the tax evasion at starbucks 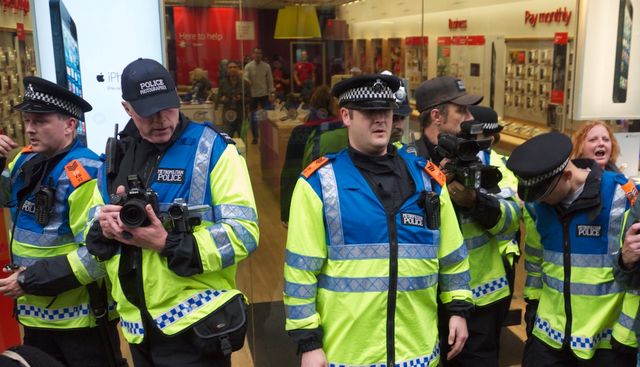 click on pics for larger version. some rights reserved - credited, non-commercial use ok. all other usage contact author.
------

as groups gathered around london, i popped in to the st paul's climate bloc as they assembled, immediately spotting hoodied undercover cops and city private intelligence operatives keeping an eye on the crowd of several hundred people.

across the river, the solidarity federation group was marching from elephant and castle, followed by a large contingent of TSG and accompanied by some 'protest liaison officers' in their baby-blue tabards, sneaking around for information and intelligence in the guise of friendly policing. also spotted were several undercover hoodies in their slightly too-clean trainers and jackets. once spotted, these characters were anxious to grab banners to blend in better, but soon got bored and handed them away to others.

as this bloc entered the embankment area, they were accompanied alongside by baseball-capped TSG officers, and there was overt surveillance and filming by FIT teams.

thousands of 'unite' members created a sea of red flags, balloons and tabards, and they showcased an immaculately turned-out marching brass band. then the protest turned purple, as the unison block passed by.

walking back along piccadilly, i noticed the police were protecting 'rich' targets and tax avoidance shops like starbucks. when they start losing their jobs due to the cuts, they may wish to reflect on this.

the ritz hotel had all its front-shutters down, and the lavish side entrance was protected by a police road-block and several serials of bored-looking cops. fortnum and mason was also well-protected. there, police were accompanied by union march stewards, and liberty 'legal monitors'.

by about 1.30, the various libertarian groups had begun to leave the march, and they made their way up regent street in loose formation, flooding into oxford circus and briefly blocking traffic.

with many seasoned activists among the crowd, there was an intelligent sense of when to move, and just as police numbers built up to the degree they might be able to clear the roads, the 'rhythms of resistance' samba band started up and led the crowd 'pied piper' style down regent street and left into great marlborough street, where suddenly a load of protestors charged into the magistrate's court (the scene of many 'occupy' cases), followed by journalists and finally some police.

in the small doorway, there was a crush of people, and some police lost control and became violent (despite the fact that the invasion was entirely peaceful). one cop (KF153) drew his baton, but people around him managed to diffuse the situation after he had had threatened several protestors.

moving on, the samba led people back on to oxford street, and for the next hour or so, a pattern emerged.

the loose crowd roamed westwards, accompanied by several FIT teams and other police on foot. the targets for protest were shops that took part in the 'workfare' slave labour schemes, and the known tax avoiders. among them were vodaphone, m & s, topshop, primark, boots, starbucks, and mcdonalds.

spotting a target, activists would run ahead, racing with police to get there first. sometimes a few got in, then there would be some scuffling as police tried to prevent further incursions with threats and violence. inside the target stores, protestors remained peaceful, passing through the store, chanting slogans like 'pay your taxes' and 'pay your workers'. point made, they'd then move out to look for the next target.

there was very overt filming and photography, with FIT teams arriving at the shops first, taking over the front, while other police piled in quite violently to secure the entrance. with all the running about, one of the police photographers (4649) was looking distinctly unfit, and a member of the public offered him some water and sugar, concerned that he might pass out.

some of the activists were using fitwatch tactics, trying to block the cameras, but cops kept snatching flags and magazines used for this purpose, and also struck out violently occasionally at hands held in front of their cameras.

although there was a lot of running about, and many of the protestors were masked up to avoid surveillance, the protests seemed entirely peaceful. even though each shop invasion ended without damage, and with everyone leaving voluntarily, some police were out of control. at primark, i witnessed a young photographer assaulted without cause as he was grabbed by several large cops and bundled out of the shop, grabbed by the neck and pushed hard.

it's difficult to estimate numbers because protestors were widely spread and sometimes in several groups, but the oxford street protests were certainly carried out by several hundreds (perhaps a thousand) rather than tens of people.

at the marble arch end, greeted by large numbers of police, (probably actually there to oversee the dispersal of union protestors, and the successful DPAC blockade of park lane where traffic was turned back and the road closed for hours), the workfare activists turned back, and headed east along the whole length of oxford street once more.

there was some trouble near bond street as a line of TSG suddenly formed to prevent people passing, and scuffles broke out during which one man was arrested. he was roughly manhandled to the side of the pavement, and an angry crowd shouted for his release, angry that their rights to protest had been interfered with by TSG, provoking the confrontation in the first place.

this was however the only arrest i saw, and press reports confirm that arrest numbers were very low.

with the fast-moving nature of the actions, people began to be split up. a couple of hundred made it down charing cross road, targetting a starbucks on the route, and then went via covent garden down to the strand, and finally west to trafalagar square.

there, more than a dozen TSG vans turned up, but were not deployed, and after a while, the protestors moved off so as not to interfere with a 'vigil for victims of hate crimes' that was taking place in the square.

overall, i got the impression that police orders were to avoid arrests, tolerate roving oxford street protests without attempts to kettle, to collect as much intelligence and surveillance as possible, and to prevent any shops from being entered by activists.

activists seemed intent on visiting as many 'offending' businesses as possible, briefly entering each to chant slogans, make their presence known, and inform the public and the staff of their purpose, relying on the police to close down shops they targetted.

all pretty symbolic with the potential for powerful images (if the MSM actually covered any of it). where the problems occurred it was with individual officers who became inappropriately violent towards both protestors and media.

bbc online - made point that there were far fewer protestors than the last one earlier in the year. it mentioned DPAC's road closure in passing, and it claimed there were "up to 40 protestors dressed in black on oxford street". their bbc24 broadcast featured an interview with a right-wing think-tanker calling for greater cuts. no protestors were interviewed and the anti-cuts view was not represented. oxford street and DPAC were ignored.

c4 online - didn't cover the workfare, tax avoidance, and DPAC protests at all

all MSM seem to have arrived at a figure of 100,000 for the march (normally described as 'tens of thousands') although the TUC is quoted occasionally as claiming 150,000.