Tommy Robinson of the EDL is not going to be celebrating Christmas at home this year! It's turkey twizzlers behind bars for the career criminal!
Crivvens! Jings! And Help Ma Boab! Whit a way to start the week! Mr Tommy Robinson, alias Steven Caxley-Trousers, of the English Defence League has been right royally nicked for all manner of shenanigans and is currently living it up in HMP on the nonce wing for his own protection! After boasting all week about his ‘boy’s day out’ and murmurs about ‘arctics’ on Twitter Mr Tommy and 50 odd other ‘patriots’ were all arrested in the back of a van allegedly intent on sneaking into London to attack a mosque at the weekend. The fallouts of this latest fiasco are very interesting indeed!

Given the fact that EDL security is as watertight as an Andrex Wetsuit it is hardly surprising that they all fell afoul of plod who were apparently tipped off and thus apprehended the merry bunch of racists. Rumours are flying around at the moment as to the source of the info and we have been reliably informed as to who did it exactly. The three top sources are currently: a female EDL insider quite near the top who has blabbed; a certain webmaster bitter over the lack of attention his little outfit gets these days; and a very nice bunch of anti-fascists who had the info leaked to them by a disgruntled member and passed it on. In fact, it could be all three. The exact identity of whoever whispered into plod’s shell like ear is pretty irrelevant as the end result has some serious ramifications!

Mr Tommy was meant to surrender his passport during the Euro soccer tournament, as he is a known football hooligan, and indeed he was up in court the other week because of his failure to do so. Mr Tommy used his passport to go over to the States to ‘do a speech at the UN’ (in fact to a tiny bunch of racists in a small room near the UN building) and America’s super-system of security did not notice this until now and he has been remanded for entering America illegally. He had tried to get into America a couple of years ago but was turned back, much to his embarrassment, as he has such an ‘interesting’ police record. We have been wondering how he had managed to get into the USA this time round. Regular readers will know that Mr Tommy’s legal woes have been piling up over the year so it is a mystery why his supporters claim he is the victim of police oppression. What they do not mention is that many of his legal problems are nothing to do with the EDL (fraud, hooliganism, failure to surrender passport) and Mr Tommy is in fact a career criminal. Which is one of the reasons why he was booted out of the fluffy fascist British Freedom Party as he is a political liability.

Not only this but beardy weirdo Sayful Islam had apparently took a bit of a kicking in Luton and blamed Mr Tommy for it so several of the EDL arrested had their clothes taken by forensics and had to go home in their underpants. We despise Mr Islam as much as we do Mr Tommy but do not wish a kicking on anyone.

The very posh leader of the fluffy fascist British Freedom Party, Lord Paul Weston, was also allegedly nicked although the fluffies are now denying it. Karaoke Kev Karol, who is standing for Police Commissioner in Bedfordshire in a couple of weeks, was nicked later. A potential candidate for ‘law and order’ being nicked along with a bunch of hairy-arsed, has-been hooligan racists is hardly a vote catcher is it? Most of this happy gang of arse-clowns were banged up for quite a few hours then eventually bailed.

So all this has bigger ramifications for Mr Tommy and the EDL and there are a few theories about this whole affair floating about, one being that Mr Tommy deliberately leaked the info to plod so he would be arrested and his bail conditions would then restrict him from attending Walthamstow 2. He knows full well that he cannot get the numbers to his demos and has indeed admitted that the EDL demos have achieved nothing. As the recent Walsall and Rotherham demos showed he has barely 300 supporters left so he can now cancel Walthamstow without losing face. He also knows a much larger number of anti-fascists and locals will outnumber the EDL on the day and that the EDL are going to be utterly humiliated. His arrest also enforces the martyr image he so desperately wants to cultivate so he can claim he is a ‘political prisoner’ rather than a career criminal. If he was at liberty he would have no alternative than to show up, contravene his bail conditions and then get arrested like he did at Tower Hamlets. The remanding saves him the trouble of manufacturing excuses.

Needless to say the EDL took about 24 hours to get their story straight and are now saying it was simply 'a lad's day out' and 'a photoshoot.' They have inflated the victim balloons by claiming there is a two-tier legal system and that Mr Tommy is a ‘political prisoner.’ More importantly, they have got the begging bowls out to pay for Mr Tommy’s legal representation as he has apparently been denied legal aid. If Mr Tommy wasn’t such a self-seeking, vain and publicity hungry little ‘chav scrote’ we could almost feel sorry for him. But it looks like things have got on top and he is in serious trouble. Listen for the bells, Mr Tommy, it tolls for thee! See you in Walthamstow!

EDL proving they're Nazis in Walthamstow 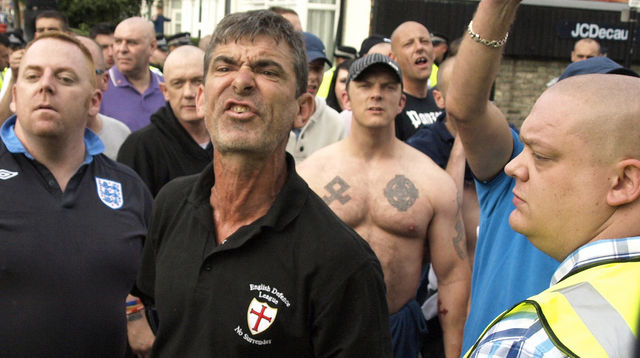 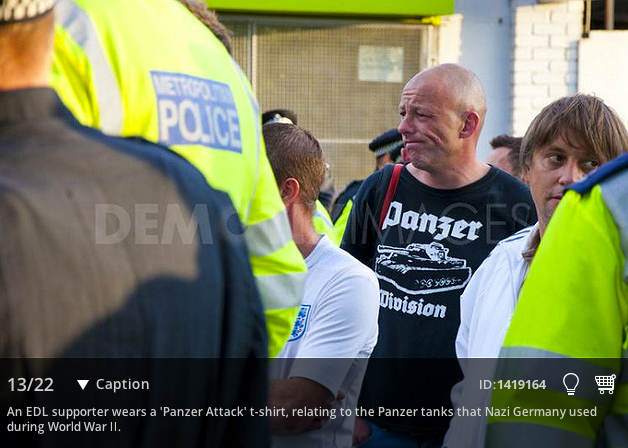 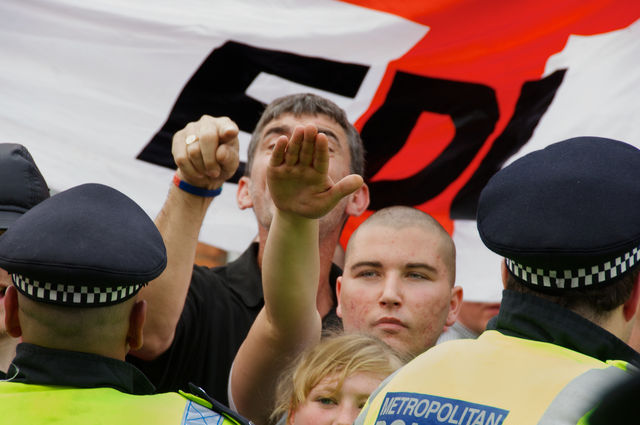 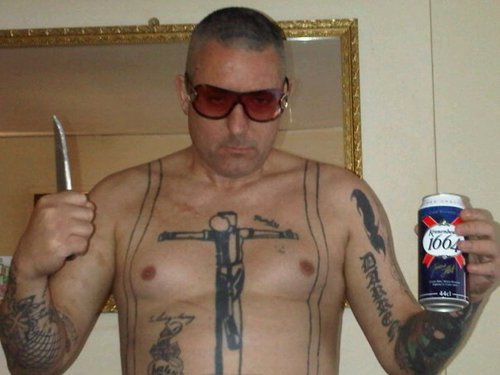 EDL getting ready for Walthamstow 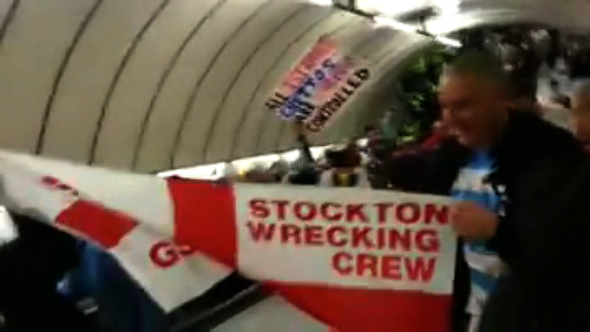 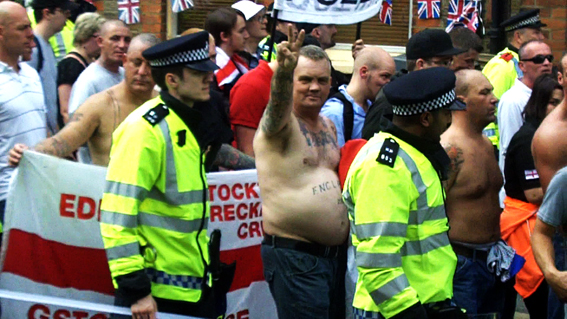 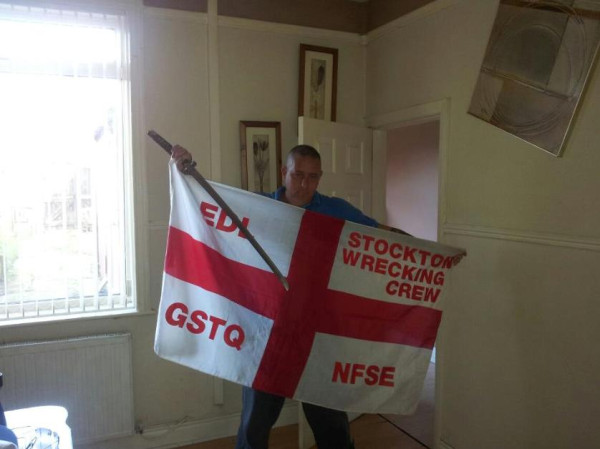 EDL getting ready to return to Walthamstow

Stockton Wrecking "Crew"... all one of him (he gives his name on Facebook as Darren Mann) - 1st and 4th photos are from Facebook, 2nd and 3rd photos are stills grabbed from videos posted on You Tube

cant believe how dumb people are

photo #3: This is taken from a video. The guys are waving. Video anyone waving and you could choose to stop it on a frame that looks like a nazi salute.

photo #4: The guy is obviously a nutcase. So what? There are lots of nutcases. Some have just been on trial today for making rucksack bombs and they didn't look like this guy. At least this guy is just taking photos and leaving no footprints.

photo #6: A fat man is marching with his top off? Its a hot day! Look at everyone, most people have their top off.

Photo #1: The Celtic cross is one of the most popular symbols used by individuals and organisations to represent Neo-Nazism and white pride, it is used as the logo for white nationalist website Stormfront.org (Wikipedia)

Photo #2: German? On an English Defence League demo? Whatever! A panzer division (German: Panzerdivision) was an armored (tank) division in the army and air force branches of the Wehrmacht and the Waffen-SS of Nazi Germany during World War II. The guy is obviously a Nazi sympathiser. (Wikipedia)

Photo #3: You wave with a rigid, straightened arm do you? Perhaps you should see a doctor about that. Nope the Nazi here is clearly seig heiling.

Photo #4: At least you admit he is a nut case. The trouble is that the EDL attracts nut cases like this.

Photo #5: Yep, it’s a flag (probably made cheaply in the Far East like most of your ‘nationalist’ flags). But it’s promoting the Stockton Wrecking Crew. Are they just a fluffy little pacifist group then?

Photo #6: It’s nice to see that the Master Race are such fine figures of men rather than the Neanderthal, knuckle-dragging, racist, football thugs that some would have us believe.

Photo #7: Yes, they have a right to do what they like in their own home, but if they go publishing photos of themselves on social media brandishing lethal weapons they shouldn’t be surprised if people think that they might have psychopathic tendencies.

But then you knew all that didn’t you? You Nazi apologist 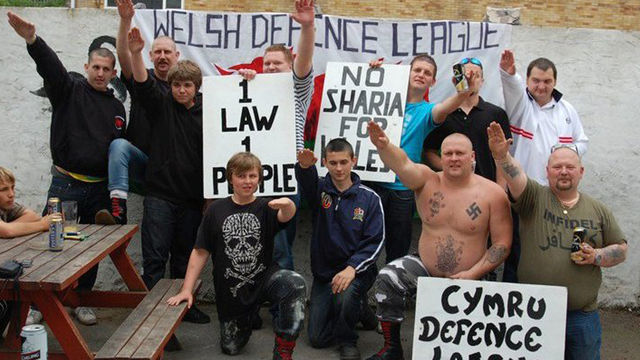 Q - "Celtic symbols aren't racist"?
A - Not always, but they're often used by Nazi groups, as is the Viking rune which is the guy's other tattoo

Q - "Panzer division. The guy is obviously German"?
A - Yes this EDL demonstrator could be German... a German Nazi, thanks ;)

Q - "Video anyone waving and you could choose to stop it on a frame that looks like a nazi salute"
A - So obviously the Swastika tattoos in the Welsh Defence League photo mean nothing?! 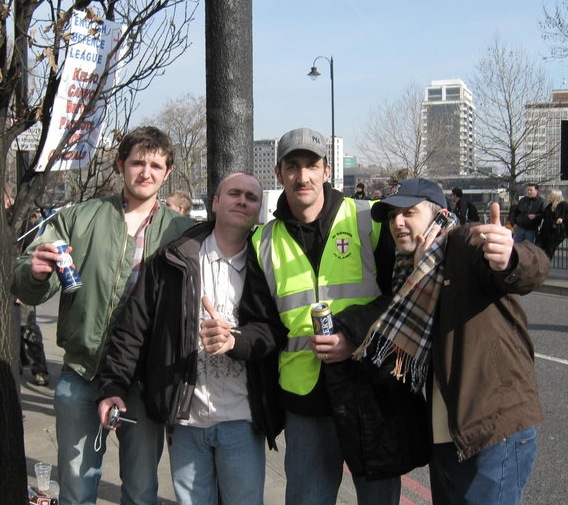 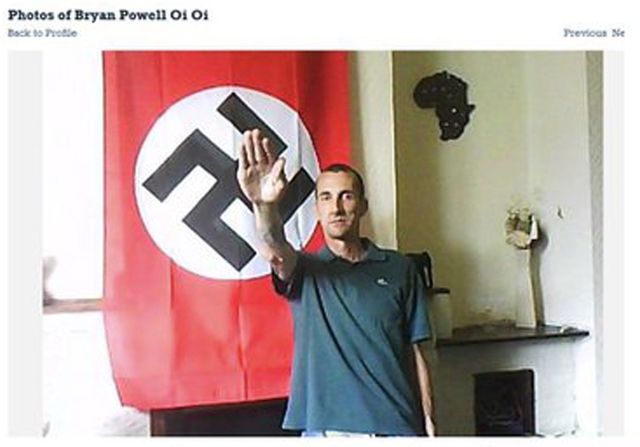 Photo 2 - Bryan Powell (this time clean shaven).... caught in the middle of waving to his nan.... with a very stiff arm.... in front of a Nazi flag

Give it up you berk

these denials all sounds rather feeble. the more they deny it, the more they sound deluded and clueless as to who they are marching with. fuckbugles. their time is up. see you in walthamstow.

Special Branch are setting up an front organisation called the Real EDL without Tommy and Kev, where the members will give their names and addresses to a central database, and can be monitored far better than the present EDL. This will start on Sunday, and will be aimed at snooping on rank and file edl members for the new world order.