This week, the issue of drone warfare has reached the High Courts (and the mainstream media) in both the UK [ 1 | 2 | 3 ] and Pakistan; the UK is about to double its fleet of armed drones and begin to operate the new drones from RAF Waddington in Lincolnshire; and more people have been killed and injured in another drone attack in Pakistan.

Wrexham Peace & Justice Forum will have an information stall on drones outside Wrexham Library on Thursday 25 October between 11.45am and 1.15pm.

There will be a demonstration at RAF Waddington main gates between 12 noon and 2pm on Friday 26 October called by Drone Wars UK. This will take place as the RAF holds a ceremony to 'stand-up' its new drones squadron, 13 Squadron. 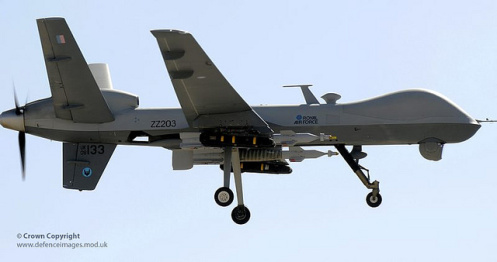 From midday to 2pm
The Main Gate is on the A607 Grantham Road, south of Lincoln.
More information on the latest drone wars news and the demo on the Drone Wars UK website.

See also: 'I HAVE A DRONE'
by Juice Rap News
YouTube link to video
Electile dysfunction: Obama versus Romney