The Met Police have successfully applied for a Home Office ban on the planned EDL march through Walthamstow, this Saturday, Oct 27. The ban applies to all marches in Walthamstow and north east London, and lasts for 30 days, but does not prohibit static protests. The EDL action is however still definitely going ahead. 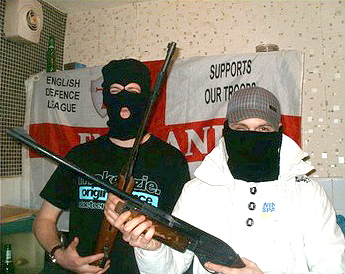 The Metropolitan Police have successfully applied for a Home Office ban on the planned EDL march through Walthamstow, this Saturday, Oct 27. The ban applies to all marches in Walthamstow and north east London, and lasts for 30 days, but does not prohibit static protests. It's hardly surprising the Home Office banned the EDL march, seeing as how EDL supporters posted photos on Facebook showing themselves preparing for Walthamstow, brandishing knives, hammers, swords and guns (see previous Indymedia threads, etc). In the past police bans have been a joke anyway - if the EDL arrive at a meeting-point (such as a railway station), then walk, chanting and waving banners, under police escort, to a "static" protest, the "banned" march has taken place (making fools of the police and the Home Office in the process).

Even before the police imposed this particular ban however, far-right web-chat was talking in terms of EDL leaders texting out details of multiple meeting-points, raising the possibility of Fascist thugs roaming Walthamstow and/or central London (with or without police escort). EDL chatter also called on supporters to "Unite the Right", ie - to throw away even the pretense the EDL aren't mostly Nazis, and for the BNP, NF, C18, BM and other Nazi cannon-fodder to fall-in to try and save EDL leader Tommy Robinson's badly-damaged pride on Oct 27.

What we do know about Saturday is that the EDL action is DEFINITELY GOING AHEAD. However - 1/ leading from the rear as usual, EDL leaders Tommy Robinson and Kevin Carroll conveniently set themselves up to be arrested last weekend, meaning they can avoid having to take the same risks as their troops on Saturday, 2/ the EDL's official Facebook has announced the protest is being moved to outside Parliament (Westminster, central London), although that doesn't mean EDL supporters might not also visit Walthamstow, 3/ when the EDL Dewsbury Division asked "any suggestions for Saturday" EDL supporter Joe Ormsby's reply was "Paki bashing".

There are so many places the EDL might rear their f-ugly heads on Saturday - Kings Cross, Euston, Walthamstow, Westminster, etc? - it's difficult to make suggestions that aren't at least potentially misleading. However if there's anything we can all agree on it's the need to 1/ turn-up, 2/ gather and communicate intelligence and keep our eyes open, and 3/ report and react to information quickly.

If you report anything (on-line) take screen-grabs and post-up URLs, and if you see anything (on the street) post-up and tweet photos if you can, so reports can be verified. Be aware that some EDL chatter may be misdirection. Never admit to or advocate specific actions on-line or on Twitter, and if you can only post-up info to public forums anonymously. Know your rights. Stick together. Best wishes to all Anti-Racists and Anti-Fascists.