Bristol is being dragged into a bogus Mayor election that is attemting to pass over sixty percent of the electoral power over to one individual which in the modern world is considered either ludicrous or a regime and in historic terms, it was known as feudal. The article is written by Dave Dobbs who is running for Bristol Mayor who is running as a protest to the stupidity and to highlight why the Government wants Bristol under corporate lockdown seeming as it is one of the major locations that drones are now manufactured in the UK. And the prospect of war that now looms. 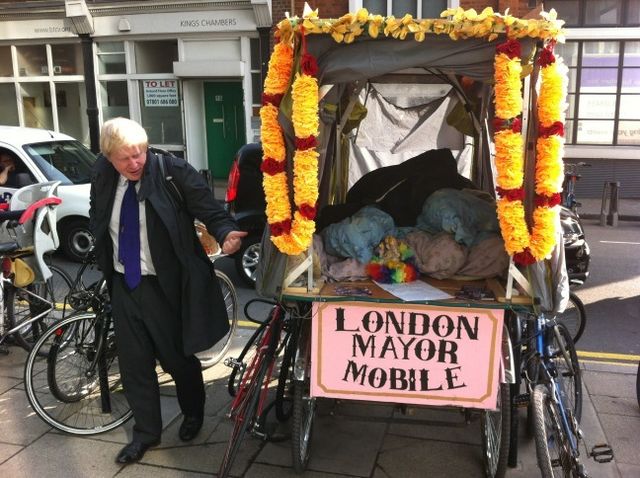 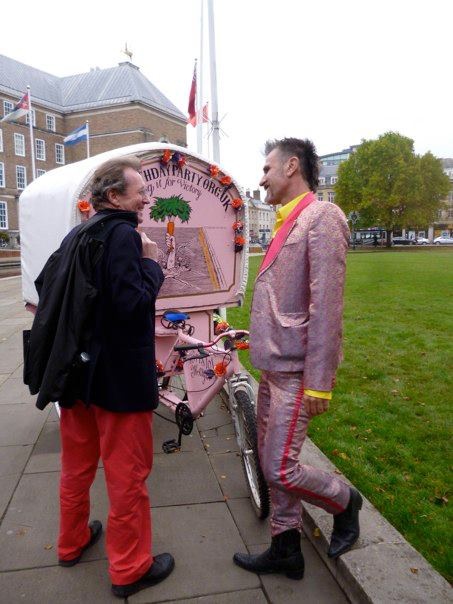 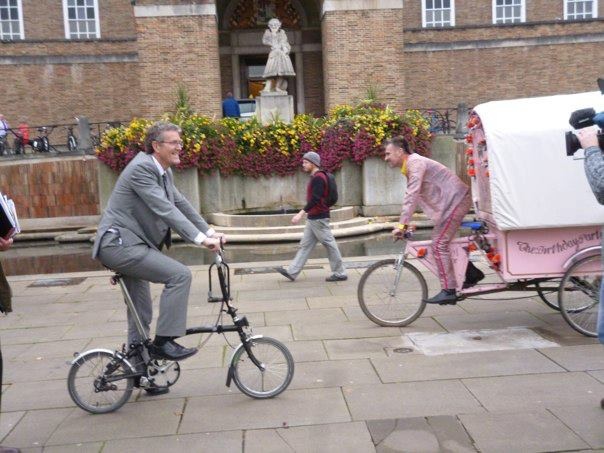 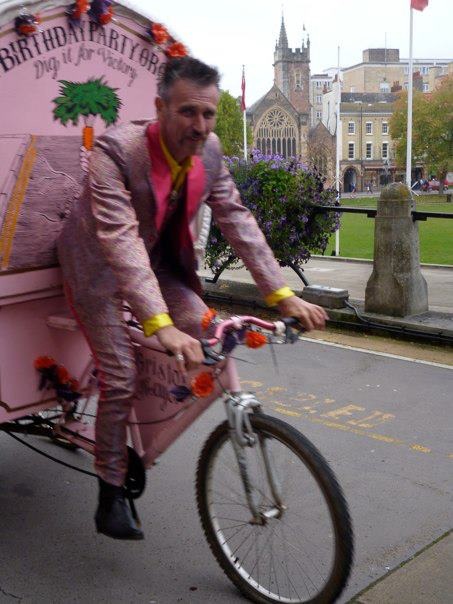 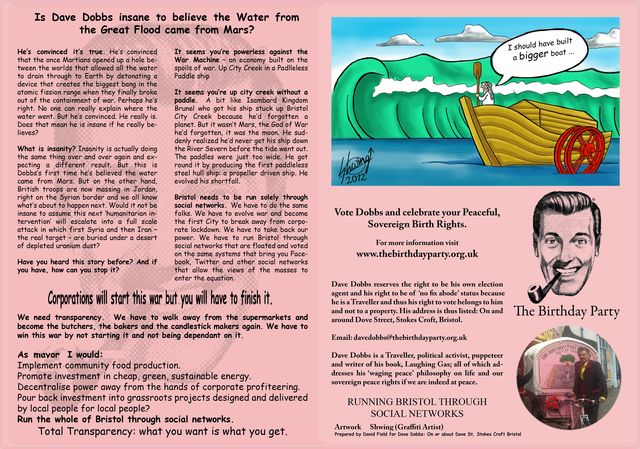 I am running for Bristol Mayor as a protest about giving over 60 percent of the electorate power over to a single person. I started the protest against this system when I set up Occupy London Mayor as a protest against a Mayor in London that holds all the power, where I lived outside the Guardian offices in a live-in cycle rickshaw and also stayed on the Occupy site at Finsbury Square. I am running only to suggest that all that power being given over to a single individual, could be floated on social networks so people can really express their wishes through ‘likes’ on social platforms like Facebook. If just ten percent of the population that uses Facebook expressed their political interests we would have a political renaissance in this city. We could create a platform where all could really see the numbers of people that really liked specific ideas and the true demographics of that alone would bring enormous volumes of people together. It would take that massive centralization (US spelling) of power and produce the nearest thing to Proportional Representation ever seen in this country. It is totally feasible and virtually free of charge to run. The transparency of the move would be virtually impeccable. And the likes of the common man and woman would not need to lobby the winner in this fix-up. It would be those in their own immediate community they would need to address.

I cannot win against the massive corporate fix-up and takeover bid that this effort really is and am invited to virtually none of the hustings organized by corporations to fool the people into giving up their power. But though I cannot win in this I can at least shed some light on how the process works and what is unfolding right under all our noses.

Bristol is basically the next victim of what is being described as an ‘Elected Mayor’ system that will give over sixty percent of all the power of the elected councilors over to a single person. In literal reality, that is what is known as feudalism – the returning to a feudal state. It is a complete reversal of our democracy and a reversal of our evolution.

Bristol is one of the main manufacturing bases of drones which is why the Government is wanting complete corporate lockdown of the City as it is of strategic military interest. We are told that 12.5 percent of the Bristol electorate voted on giving 60 percent of their electoral power over to a single person. But in reality, so few are even on the electoral register. Many just feel they can’t register because they have lost interest or are unaware that their names are taken off the register if they do not actively reapply. Many are sharing rooms and living below the radar and cannot risk Landlords finding out the volumes of people living in a property and thus cannot risk going on the electoral register. Many are simply hiding from debt whilst many are simply homeless. Bankers have over lent money and driven property prices to levels that are simply unaffordable.

I had hundreds of people that thought they could nominate me but found most were not on the electoral register so could not nominate or vote. I myself am a Traveller and know my rights and am the first person to run for a Governmental post that does not live in any property and has no postal address, yet claims their ‘No Fixed Abode’ status. But most people are not aware that their vote actually belongs to them and not a property or banker. Thus the percentage of people in Bristol that could have legally voted if they had known their rights is far-far lower than those indicated – without any doubt whatsoever.

I am basically a political activist and have been for nearly fifteen years and my fundamental cause in all that I am doing is actually to stop a looming war with Iran and Syria. Bristol is one of the main places in Britain where drones are manufactured and thus makes the city a key target in war. And with drones costing about a billion pounds per fifty, it’s easy to see why the government is driving such austerity. In fact, the first wave of austerity measures pushed upon Greece ended with 11,000 bombing sortes being carried out from military bases from that country that ended up destroying Libya – or should I say ‘liberating’ Libya! Just like the forty thousand times more radio-active compounds generated by the Hiroshima atom bomb that were dumped in Iraq alone in the form of depleted uranium bombshells - for their ‘liberation’. We are all being duped into a new war and it is so easy to see where all the money goes from the austerity we are all experiencing. It is truly terrifying what is unfolding right under our noses – right now.

And we are now hearing that Syria is the new warring regime, and must be stopped. No one is really mentioning the enormous oil fields in the Mediterranean off the Syrian coast or the strategic positioning of Syria’s geographic positioning in war. Or the fact that Syria imports nothing but raw materials and manufactures everything and grows everything itself. It is a very advanced and beautiful country with many different religions co-inhabiting. Syria is being dragged into a war we are being told that they started and have politely stopped for the US elections, whilst British troops mass in Jordon on the Syrian Border waiting for the US elections to come and go. And the Syrians know we are going to wipe them out – sorry, ‘liberate’ them…

It is easy to see why I am invited to so few of the hustings that have been held even though I am an official candidate. The whole process is clearly a massive fix-up. Plus I am not prepared to talk the total rubbish that most of the candidates are spouting when all the money is about to be taken from under their feet. It’s just nonsense and hot air. We are all being shafted here to turn the whole of Bristol over to a fully corporate warring agenda that if our Government gets its war, will make Bristol a key and legitimate target.

One person can make a lot of decisions but cannot sustain being able to understand the needs and wants of a whole city. It is just not possible. The power triangle has to be turned upside-down and the Mayor in Power needs to be at the bottom receiving the Will and Intent of the people and honour those wishes. If not, all that prevails is a feudal state that reverses nearly a millennium of evolution.

I’m afraid with the level of technology now involved with war, it’s time to wake up or face the dire consequences. We know that Iran landed America’s supposedly infallible – state-of-the-art – drone and then turned it into a children’s toy. Perhaps the Iranian Kesh foundation that claims to have harnessed fusion is not true, but their technology clearly terrifies those that propagate war and fossil fuel dependence. But considering Iran has not invaded another nation in three hundred years, do we really need to fear them? Or perhaps all this really is simply about Iran’s vast reserves of oil. That is most likely and yet it still baffles scientists how they actually achieved landing the machine. Either way, when our Government is talking about ‘liberating’ Syria, one of the main manufacturing arms of Iran, it is an attack on Iran and Bristol becomes a key target. We will literally be at war with Iran in that move – a nation that the US government, as proved by Julian Assange with his Wikileaks, the US Government believes can only be tackled with the use of mini-nukes that are ‘only’ ten times more powerful than that used on Hiroshima and considered ‘safe for civilian use’ because they detonate supposedly below the surface of the ground, providing the ground is soft enough at the point of impact.

It is clear that drones will likely start this war but at the cost of a GBP 1000,000,000 per fifty, it is clear the soldiers will be far cheaper and in the event of this war starting, we will see a draft enacted across Britain simply because the cost of fifty drones could buy the Government tens of thousands of troops. Once a war starts with Iran, it will unlikely stop until the bitter end. The entire math’s of our Government’s arguments are that it can drive the whole of Europe into war with austerity. I believe humanity, bar a very few individuals, has evolved war. If Europe rejects the British plan for war, the people may be left to finish what the corporations start - completely on our own.

So I ask you: Are you prepared to pick up the guns if the drones do not live up to their promise? Is this your war? If not, meet me at the fountain in Bristol City Centre and bring a candle and an instrument if you are musical. This is a peaceful vigil, being held in the highest grace.