Following the suspicious death in Harmondsworth last Tuesday, and the release of an important statement by Ghanaian detainees claiming the man had been beaten, stripped naked, and left to die in an isolation block (see here: 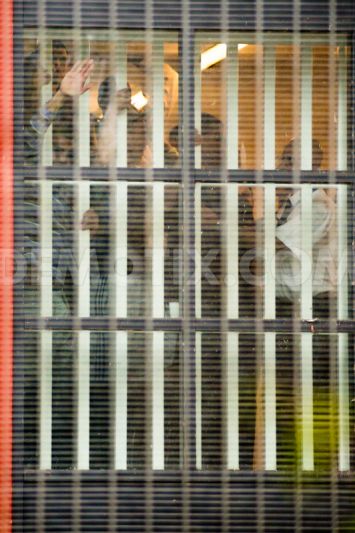 Detainees at the window. Photo by Peter Marshall

It was beautiful. In these highly securitized centres, its generally very difficult to get anywhere close to the blocks where detainees are held. However, yesterday, armed with megaphones, horns and whistles, we managed to walk the full perimeter of Harmondsworth and make our presence known to people inside.

Detainees piled up at the windows, fists were waving and banging at the impermeable glass. Our cries of "freedom, azadi, hurriya, liberte!", were echoed on the inside as call-and-response chants erupted into a wave of whistles and chanting across the blocks.

Detainees flooded the exercise yard and chanted some more until they were moved by guards. Over the megaphone, we expressed messages of solidarity and urged detainees to call us if they wanted to speak out about their conditions and about the death of the man known as Prince Ofosu who died there last week.

What followed was a flurry of phone calls from detainees - many in great distress about their own situation - and all telling similar stories about Prince. Prince was reportedly taken out of view of cameras, beaten, stipped naked, and left in an unheated cell until his body was found. The guard was reportedly told to get rid of his clothes to hide the evidence.

Another common theme from callers was self-harm and suicide attempts, and sleeping through detention on sleeping pills routinely prescribed for an array of mental health conditions and inevitable anxiety.

Other disturbing news emerged which we are currently investigating, details of which we will post here if we get hold of more information.

People were very happy to see that people actually care, will acknowledge the injustice of detention and deportation, and will listen to their stories.

Eventually, the police had enough of all this love and solidarity, and decided to read some notice for us to leave (couldn't hear over all the chanting as his megaphone was smaller than ours. Ha!).

Deciding that our main aim of reaching out to detainees had been achieved, campaigners left but remain in contact with many detainees.

Footage of the day will be posted shortly.

This death will not be silenced! Justice for Prince Ofosu!