This morning, on November 17th 2012, a member of the Brighton Palestine Solidarity Campaign chained himself to the Ecostream shop on Western Road. This action was taken to demonstrate that Ecostream is unwelcome in Brighton due to the location of its main factory in the illegal Israeli settlement of Mishor Adumim.
Despite branding itself as a ‘green’ shop in an attempt to gain popularity among Brighton shoppers, Ecostream in fact exploits Palestinian resources, selling stolen goods taken from a stolen land. Furthermore the settlement of Mishor Adumim has an extremely detrimental effect on the everyday lives of Palestinians living in surrounding villages; for example the Israeli army forbids them from building permanent structures on their land, in an attempt to protect the settlement.

While Ecostream does employ Palestinian workers, it must be remembered that they are working in the context of an occupation. As subjects of an occupying regime, these Palestinians do not enjoy their civil rights, including the right of workers to organize, and the company has the right to revoke their work permits at any time. Therefore, Ecostream’s argument that it provides Palestinian workers with jobs decontextualises the fact that Ecostream directly profits from Israel’s occupation of the West Bank.

The action taken this morning was in line with the Palestinian call for boycott, divestment and sanctions, which urges a boycott of all Israeli companies until Israel complies with international humanitarian law, recognizes the fundamental rights of the Arab-Palestinian citizens of Israel to full equality, the right to return of the refugees, and ends the siege of Gaza and the occupation of all lands taken in 1967.

The call for the end of the siege of Gaza is particularly poignant given the events of the last week. The recent Israeli aggression on the people of Gaza was yet another motivation for the action taken this morning. Operation Pillar of Defence was launched after Israel broke a ceasefire with Hamas by assassinating Hamas leader Ahmed Al-Jabari. The death toll currently stands at 3 Israelis and between 27 to 40 Palestinians.

In the face of Israel’s brutal use of force and violations of international law, we must do all we can to show our solidarity with the people of Gaza. Ecostream was chosen as the location for this show of solidarity due to the fact that, as the company benefits directly from the Israeli occupation, it can also be considered complicit in the state’s war crimes. Brighton is a tolerant city, but what must not be tolerated is the cruelty of ethnic cleansing, which Ecostream has become a symbol of. 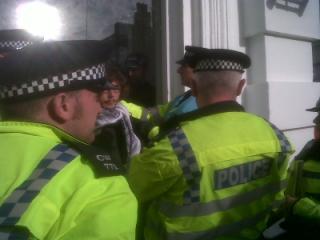 Police check out lock-on at Sodastream

Monday the 19th of November all day: Call EcoStream on 01273567924 and/or
tweet @EcoStreamstore and @SodaStreamUK with questions and comments about their business. We advice that you keep your correspondence polite and
factual