A small group gathered outside Barclays Bank in Wrexham this morning to stand in solidarity with the people of Gaza. 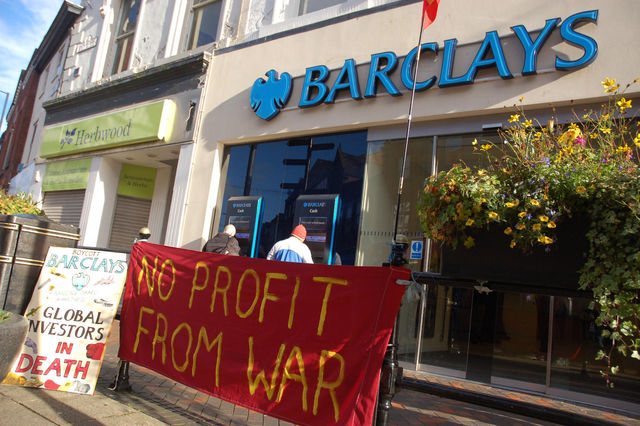 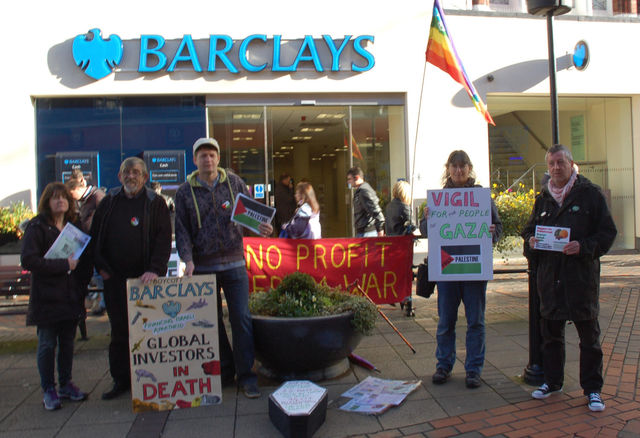 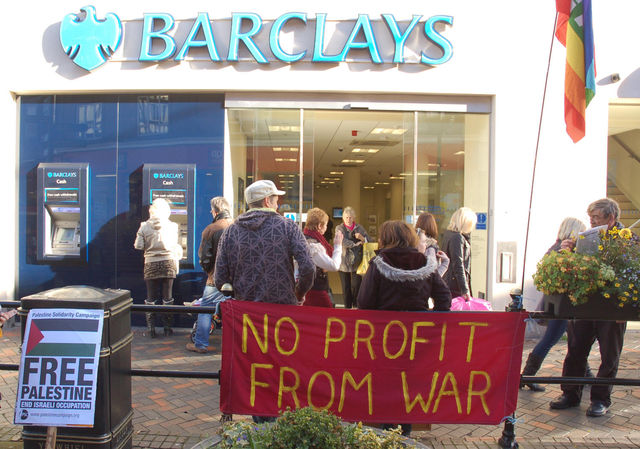 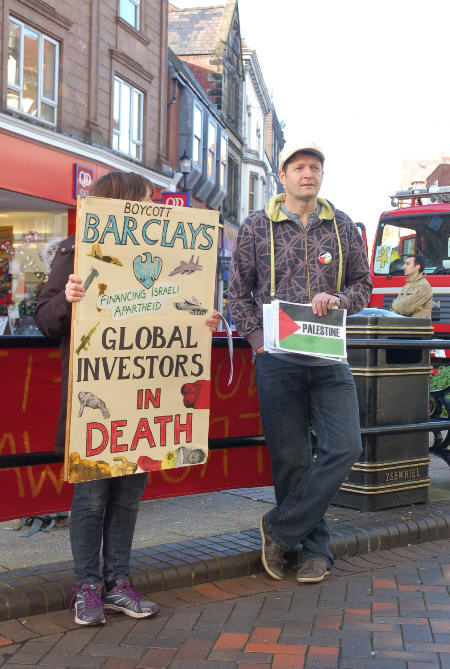 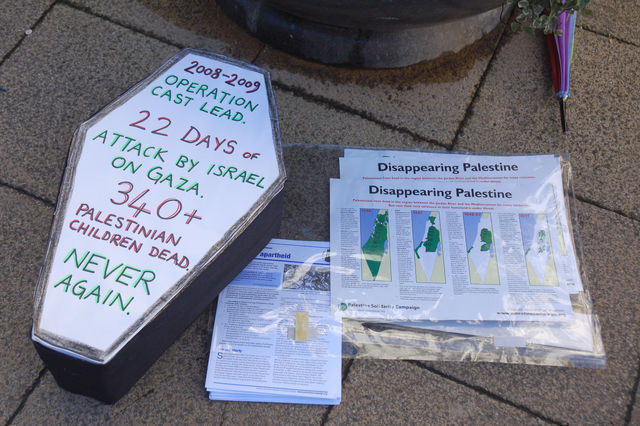 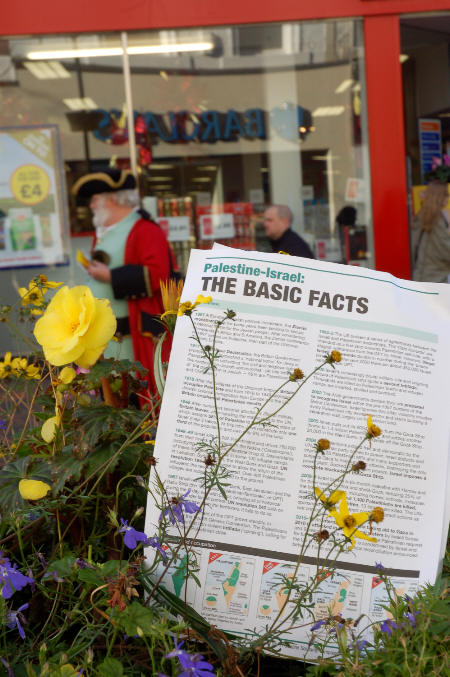 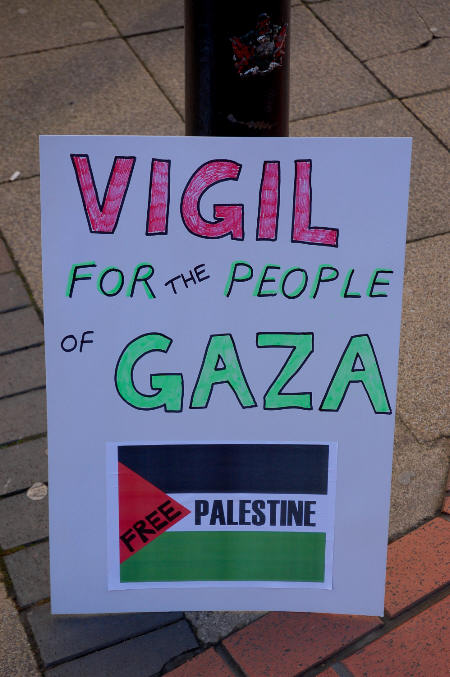 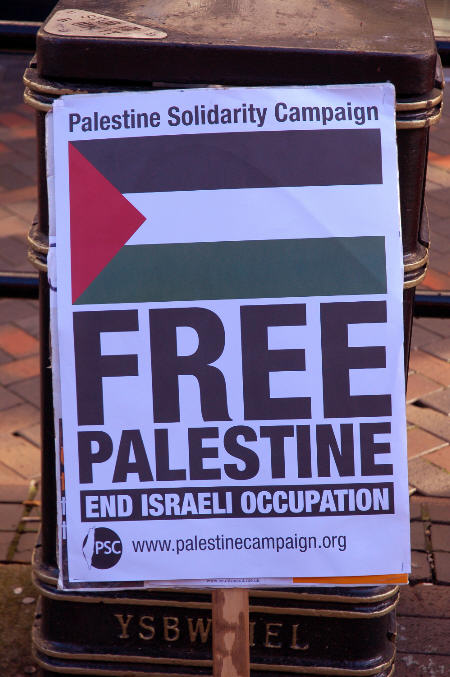 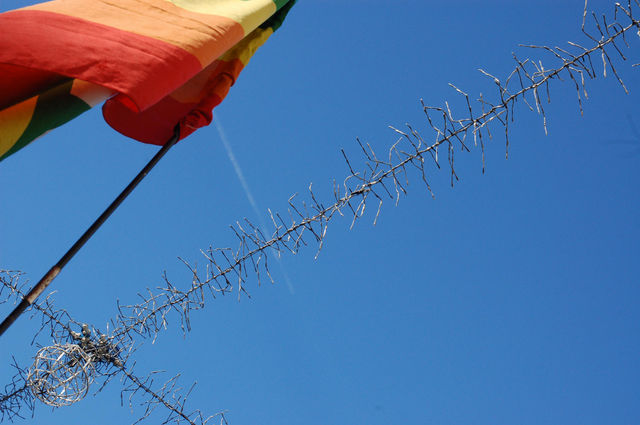 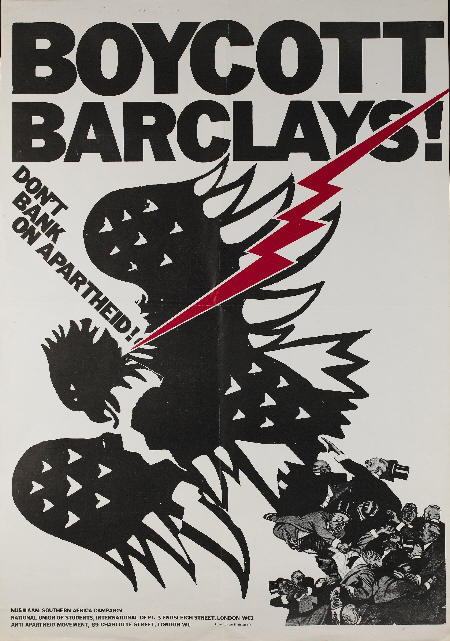 Boycott Barclays poster from the 70s - Don't Bank on Apartheid

We handed out flyers to Barclays' customers, who were also confronted with a large board directly opposite the bank's shopfront entrance alerting them to Barclays' links to the global arms trade and Israel. The flyers included information about how Barclays profits from death, destruction and Israeli Apartheid, as well as a little background to the current escalation of the conflict by Israel and the terrible consequences for the Palestinian people of the Operation 'Cast Lead' bombardment of Gaza in 2008-9. Customers were encouraged to boycott the bank. Barclays was a major supporter of the South African Apartheid regime and was the subject of a concerted boycott campaign in the 70s and 80s, eventually pulling out of South Africa in the mid-80s.

A Barclays rep came to the doorway at one point to demand angrily "Have you got permission to do that?" then stormed off to call the cops who must have declined the invitation to attend.

When all our Barclays flyers had run out, we handed out information leaflets about Palestine and the Boycott Israeli Goods campaign.

I had some interesting conversations with supportive passers-by including a man from a military family who'd been high up in the RAF for years, had latterly worked in the Middle East and didn't seem to be under any illusions about nuclear weapons, US interventionism or the plight of the Palestinians; a Salvation Army captain; a worker who asked for flyers and posters for his staff canteen. Apart from unfriendly Barclays staff, a guy who spat back over his shoulder at us as he walked past and the usual more polite declines, the only negative feedback I had was from a Barclays customer who seemed genuinely puzzled that anyone should object to them financing weapons manufacturers.

"But surely it's nothing to do with Barclays what these companies spend the money on... Barclays only gives them the loan. I don't see how they're responsible - their job is just to make a profit."

Barclays directly invests in and provides banking services for as well as giving loans to corporate criminals but, sticking to the loan question, we spent some time exploring the scenario of a friend asking us for money which we knew would be used to pay a hit man to kill someone. Would we have any sort of moral responsibility to consider the consequences of our action - lending money - in this situation? The guy didn't seem to think so. Our display today included a baby-sized coffin with details of the number of children killed in criminal attacks by Israel on Gaza during Operation 'Cast Lead'. I restated the scenario but this time with an end result of hundreds of dead children. He finally conceded that he could see my point, took some information leaflets and went on his way.

And banks more generally in this War on Want Report.

Previous action in Wrexham (with some of the same props): report and photos.

Why public awareness of the issues is so poor: Media Lens alert.

Mehdi Hasan: Ten Things You Need to Know about Gaza.

With echoes of the 'Don't bank on Apartheid' campaign against Barclays Bank's South African links in the 1970s and 80s, campaigners in Wrexham on Saturday called on Barclays customers to boycott the bank in protest at its support for Israel's Apartheid regime and the global arms trade. This action was taken as Israel mounts another deadly assault on Gaza with scant regard for civilian life.

THE SITUATION IN GAZA

During the last major offensive in 2008-9, dubbed Operation 'Cast Lead', almost 1,500 Palestinians were killed including over 340 children. [1] Gaza was described by David Cameron two years ago as 'a prison camp'. [2] It is one of the most densely populated areas on the planet and, apart from the land border with Egypt, Israel controls all of its borders as well as its airspace and maintains a blockade widely condemned as illegal. [3]

There is documentary evidence recently released under a court order that exposes Israel's policy of keeping the Gazan people in a state of near-starvation by coldly calculating the amount of food to allow in. [4] At times, actual supplies allowed across the border fell way below this threshold, with some decisions to reduce supplies linked to political events in Gaza. [5] In other words, Israel inflicts collective punishment on Gaza's civilian population, illegal under international law. One of the US Embassy cables attributed to a leak by Welsh-American whistleblower Bradley Manning [6] shows how Israel's aim is “to keep the Gazan economy on the brink of collapse without quite pushing it over the edge.” [7]

A recent report by Save the Children and Medical Aid for Palestinians, entitled Gaza's Children: Falling Behind reports that 10% of under 5s have their growth stunted by malnutrition, most of Gaza's children suffer from anaemia and all are at risk of diseases caused by poor sanitation and polluted water supplies. [8]

The current assault on Gaza by Israel will only make an already dire situation worse. Children are dying and there are bound to be numerous other civilian casualties

Barclays customers in Wrexham on Saturday morning were confronted with a large display board held up outside the entrance alerting them to Barclays' connections to Israel and the arms trade. The bank profits from direct investments, making loans and providing banking services to major arms corporations and Israeli companies including those operating in the illegally occupied territories and exploiting Palestinian resources and labour. [9] [10]

We also handed out flyers that included information about how Barclays profits from death, destruction and Israeli Apartheid, as well as a little background to the current escalation of the conflict by Israel and the terrible consequences for the Palestinian people of the Operation 'Cast Lead' bombardment of Gaza in 2008-9. Customers were encouraged to boycott the bank.

Barclays was a major supporter of the South African Apartheid regime and was the subject of a concerted boycott campaign in the 70s and 80s, eventually pulling out of South Africa in the mid-80s.

Genny Bove of Wrexham Peace & Justice Forum said:
“To remain silent in the face of Israel's attacks on Gaza is to be complicit in these crimes against humanity. There are many ways in which we can collectively put pressure on Israel and just one of these is to boycott Barclays Bank and other companies with Israeli links. Educate yourself [11] and then speak out. Never believe that your voice doesn't count.”