G4S offices occupied over role in siege on Gaza

More than 50 campaigners for Palestinian human rights occupied the central London offices of G4S today in protest over the British-Danish security company’s supply of equipment used to maintain Israel’s illegal siege on Gaza.

The protestors entered the building in Victoria at 4pm and staged a sit in protest and 4 people locked themselves together. Police removed the protesters after an hour.

“By providing equipment and services to the checkpoints that enforce the closure of Gaza, which includes severe restrictions in movement of people and basic goods, G4S is helping Israel to engineer a humanitarian crisis for Palestinians. G4S is an active accomplice to Israel’s collective punishment of Palestinians in Gaza,” said Bob Williamson.

More than 105 Palestinians including 23 children have been killed since Israel launched its assault in Gaza last week, and more than 800 more have been injured. The Palestinian Centre for Human Rights has accused Israel of war crimes including the direct targeting of civilians and civilian buildings and indiscriminate and disproportionate attacks.

G4S, which gained notoriety over its failure to provide security personnel to the Olympics, provides body scanners to the Erez checkpoint in Gaza, which serves as part of the Israeli closure policy over the Gaza Strip. G4S announced the deal on the front page of the website of its Israeli subsidiary.

“The Israeli government has been proven to have purposefully restricted food deliveries to Gaza in order to, as one Israeli official put it, ‘put the Palestinians on a diet, but not to make them die of hunger’. Why is G4S participating in these gross human rights violations?” added Maham Hashmi.

G4S also has a contract with the Israeli Prison Service to provide services and equipment to prisons to which Palestinian political prisoners, including children, are held in violation of international law and subjected to mistreatment and torture.

Campaigners have also raised concerns with G4S’ track record of human rights abuses in the UK. The company lost its contract to deport people from the UK last September after 773 complaints of abuse were made against the company and following the death of Jimmy Mubenga, an Angolan asylum seeker who died after being “restrained” by G4S guards. G4S has also been criticised for it’s mishandling of asylum housing contracts in Yorkshire and spying on unemployed people it was supposed to be helping back to work.

“How can the UK government give lucrative public contracts to a company that shows such disregard for basic human rights standards across all of its business activities?” asked Maham Hashmi.

[1] For more information on Israel’s attack on Gaza see


[2] A full profile of G4S' complicity in human rights abuses can be found at: 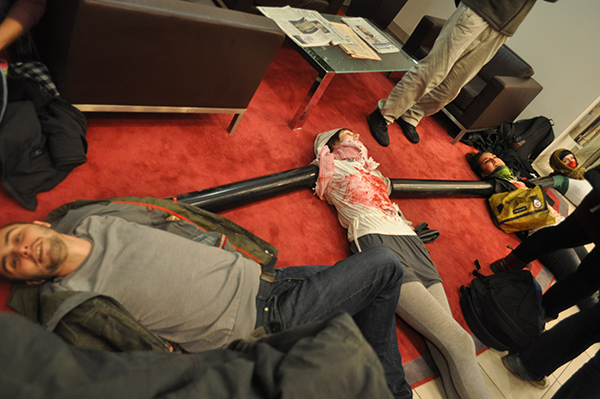