Bradley Manning is back in court this week at Fort Meade in Maryland, where he faces 22 charges in connection with the biggest anti-war whistleblowing act in history. This week's pretrial hearing is dealing specifically with the mistreatment Bradley suffered during his detention at Quantico brig in the US and evidence has been heard about his treatment from his arrest in May 2010, his detention in Kuwait and then in Quantico until his move to less punitive conditions at Fort Leavenworth in April 2011. Brad took the witness stand yesterday and will testify again today. 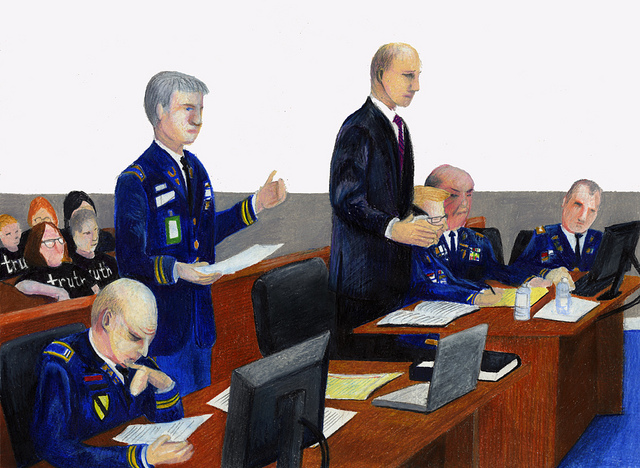 The mainstream media has been conspicuous by its absence at previous hearings but has turned up for this one, the first in which Bradley has given evidence in person. He was examined at length by his defence counsel yesterday and will face cross-examination and re-examination today.

This and all previous hearings have been covered by Bradley Manning Support Network (bradleymanning.org) and by independent journalists.

Below are links to reports and selected tweets from some of those who've been in court this week.

“During Lind's line of questioning to Choike, came out that he didn't think #Manning should've been held there [Quantico] more than 90 days”

“Psychiatrist said longest a brig had waited before to implement his recommendations was ~2 weeks. Quantico ignored him for months”

“At night Quantico blasted fluorescent light into Manning's cell, then woke him 2-3x each night if he turned his face away from it.”

“Quick recess. Sgt Blenis lied to Bradley, said doctors recommended he stay on Prevention of Injury watch, though they recommended it end.”

“GYSGT Blenis continually rated Bradley as a 'Grade A' detainee, then blamed the restrictive status on the psychiatrist trying to end it.”

29 Nov: Brad takes the stand - being detained in Kuwait

“Bradley Manning said in Kuwait he felt suicidal but didn't want to die, wanted to get out of "animal cage" where he was being held”

“When you see how defense proposed pleading by clause, can see why this case is monumental, and #Manning such an extraordinary young man.”

“Amazing to hear #Manning. Solid voice. Matter of fact. A kind smile, which he uses a lot. And earnest.”

“Jokes made by staff via emails about his forced nudity, tho, cast doubt #Manning's treatment was borne wholly out of mental health concerns”

“I think, bc #Manning psychiatrist was so soft-spoken, courtroom had very different take on testimony. Press room thought he was star witness”

“Court let out at 9pm or so. Much to relay, but one notable item: #Manning's initial Navy psychologist was in fact a dentist. I kid not.”

“After a Jan 17th protest at Quantico, brig guards "roughed up" #Manning, sending him into a panic attack. Confirmed by a commanding officer.”

There is currently some decent coverage coming from Ed Pilkington at the Guardian:

How keeping himself sane was taken as proof of madness

but be warned that some of the Guardian's previous coverage has been appalling, such as 'The Madness of Bradley Manning?' video.

“BRADLEY MANNING SPEAKS: 'I remember thinking I'm going to die. I thought I was going to die in a cage' – on Kuwait”

“BRADLEY MANNING SPEAKS: 'If I needed toilet paper I would stand to attention and shout: “Detainee Manning requests toilet paper!”'.”

“BRADLEY MANNING on incident with Quantico guards: 'I thought I was going to be attacked. I said “Please stop! I'm not doing anything”

Michael Ratner, Director of the Center for Constitutional Rights, also in court

From Emma Cape of BMSN:

Director of the Center for Constitutional Rights, Michael Ratner, attended yesterday's hearing and emphasized how impressed he was upon witnessing Bradley's testimony:

"Bradley was dignified, articulate, smart and self-aware. After two and a half years it was miraculous to finally hear him describe the horrible cages he was in and the egregious conduct of his jailers. What was done to Bradley was inexcusable. I was deeply moved by his words in a day of testimony that was like an emotional roller coaster. I cannot imagine what he must be feeling, but his incredible sincerity and strength was visible to all. We are lucky to have people with the courage of Bradley Manning."