Workfare’s Christmas Bonus For The Bosses

Saturday 8th December marks the start of a week of action against workfare [1] and shops that profit from the free labour supplied by the taxpayer. The national day of action is focusing on charities, however as there aren't many charity shops in the city centre and since a protest last month outside British Heart Foundation who announced they were stepping back from workfare[2] it was decided to take action over companies that profit from free Christmas temps at our expense. In Birmingham anti-workfare protesters gathered outside Poundland, a local company using workfare. As the protest began to grow with people joining after coming from the nearby Starbucks tax dodging action the group decided to move off in search of other shops using workfare. They didn't have to walk far when round the corner they arrived at Argos, a particularly unpopular shop amongst Birmingham Workfare activists. In Birmingham last year, Boycott Workfare was told by someone who applied for a temp job at Argos, but didn’t get it and then subsequently got sent there on workfare that they had more people on workfare than paid temps. In light of this the group made the decision to occupy the shop. The occupation was more successful than expected, security - the same people who a week earlier had assaulted a protester by punching them in the face at the occupation of the Adidas shop[3] – had obviously been told to back off and not go round punching people, let the occupation carry on as long as the occupiers wanted. After the queues at Argos had become visibly shorter the group decided that there were other shops who needed to be targeted and so ended the occupation. The next stop on the Workfare tour was Superdrug where flyers were handed out before moving on to the last stop on the tour McDonald’s. Here the protesters were joined by Birmingham Food not Bombs activists who set up a stall outside McDonald’s and began handing out free vegan burgers. 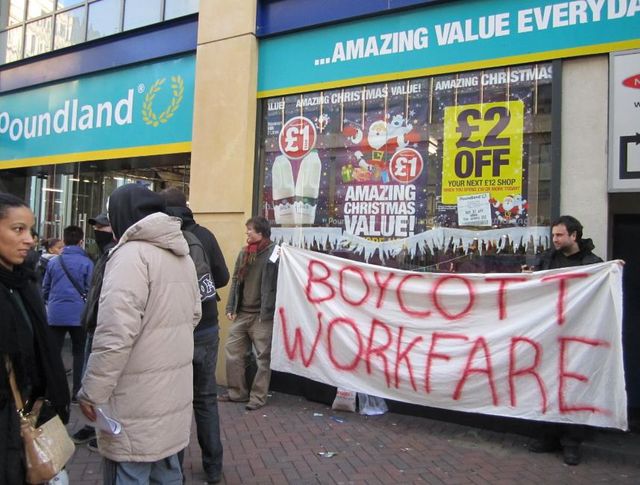 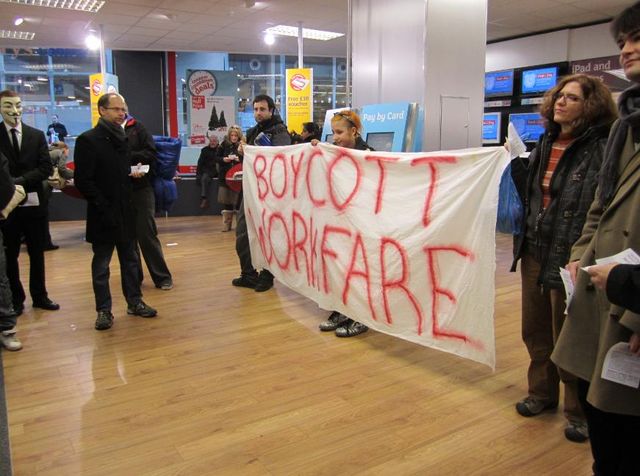 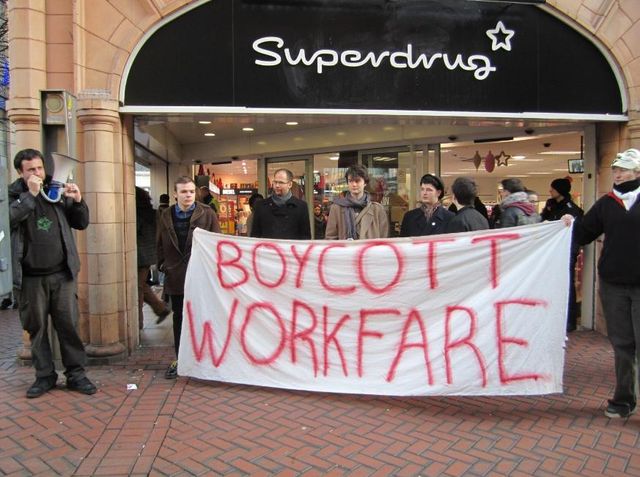 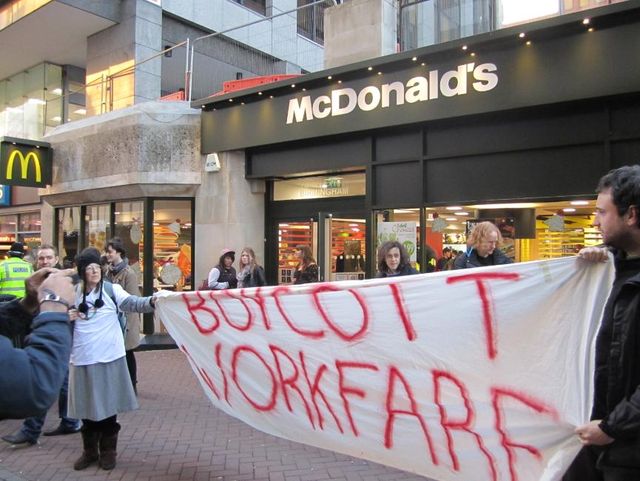 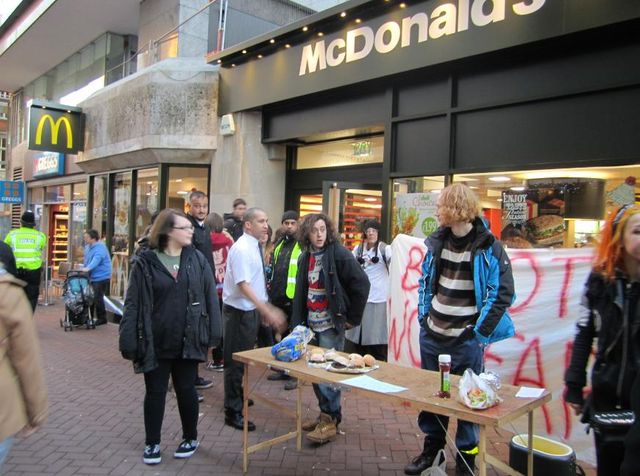 These workfare schemes are not about helping people into work. The statistics from the Work Programme show that more people would have found work if they hadn’t been sent on the scheme [4], with A4e finding just 4% of people work lasting more than 6 months [5]. For those sent on the work programme they find themselves on soul destroying schemes.

In 2008 the DWP themselves said that workfare schemes don’t work. [6] There is little evidence that workfare increases the likelihood of finding work. It can even reduce employment chances by limiting the time available for job search and by failing to provide the skills and experience valued by employers.
What they do is replace paid jobs with unpaid jobs, at the taxpayers cost. Saying no will mean sanctions of up to 3 years for unemployed people and 70% of benefits indefinitely for disabled people [7]. The loss of money is inconceivable for many people and leads to severe hardships. Locally, Sifa Fireside have also reported "housing benefit is increasingly suspended if people are being sanctioned by Job Centre Plus" [8], leading to increased homelessness.

With over half a million sanctions handed out in 2011 [9], and job centres being given targets for people to sanction[10], these schemes cannot be seen as anything other than punishment for unemployment, and a way of manufacturing falling unemployment figures [11] (although in Birmingham, unemployment has continued to rise [12]).