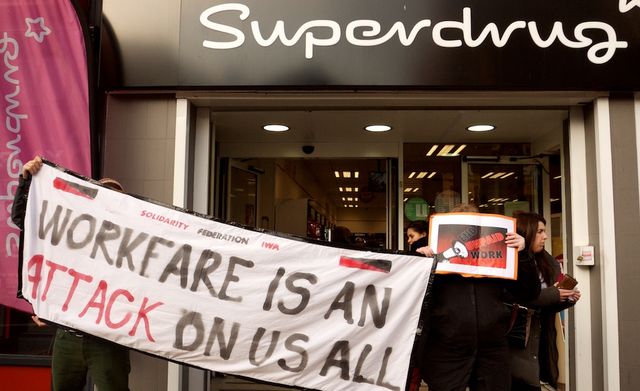 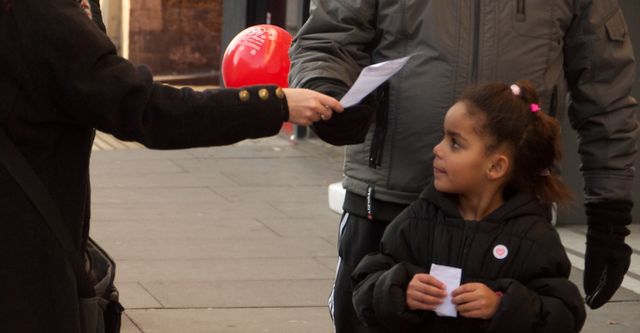 while most eyes were focussed yesterday on the nationwide ukuncut actions against tax-dodgers, starbucks, another related and important issue was being highlighted by protestors in north london.

starting at 'superdrug' they first entered the store and quietly gave copies of information leaflets to all the staff. the literature outlined basic employment rights, work time regulations, health and safety, grievance procedures, and anti-workfare solidarity contacts and help.

next, they unfurled a large "workfare is an attack on us all" banner, and a smaller "end unpaid work" placard, handing out loads of information leaflets to passers-by. the public were generally supportive, and several stopped to air their views and discuss the issues.

as i left to head for one of the ukuncut actions, the activists told me they planned to carry out similar actions at bhs, scope, and argos over the next couple of hours.

'workfare' forces the unemployed into unpaid work with major high street companies for months at a time. studies show that the scheme can actually lower the chance of finding permanent work, puts previously paid workers out of work, and ends up subsidising huge companies that pay little tax while undermining the minimum pay rate and worsening working conditions for the very poorest.

it's a sign how bad things have got that revolutionary union activists find themselves protesting for wages!