Update! A week of direct action against Bexhill link road.

“We were caught out and a lot of damage has been done – but people have been amazing and now we've have a set of established tree defences and work has stopped for the day at least. We really need support and all the usual wish-list stuff, tools, tarps, ropes etc. So come and give us a Christmas visit” - Combe Haven Defender

Maps of the planned road (scroll down!) - the camp is at Adams Farm

Anti-road protestors in Bexhill were ambushed by an early start to the tree felling on the controversial Bexhill-Hastings link road this week, but they rallied and a week of constant direct action has put a spanner in the works, with no work reported today (Saturday 22nd). Work wasn't expected to begin until early January but as soon as East Sussex County Council acquired the land (by compulsory purchase) the chainsaw gangs were set to work. 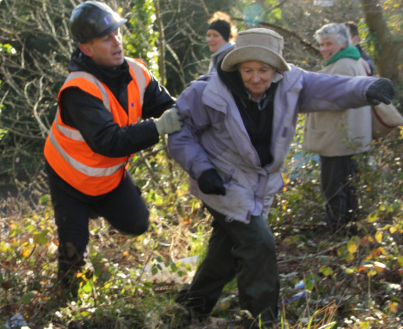 On Thursday evening information was received that tree felling in Combe Valley was to begin on the route of the Bexhill-Hasting link road early Friday morning. As contractors with machinery moved into woodland near Adams Farm, south of Crowhurst early on Friday morning they were greeted by tree bound activists and locals who had been occupying the area since dawn. Contractors and security soon realized there would be no felling, with a early lunch called shortly after activists got in the way of brush cutters attempting to clear access to trees.

Saturday saw a large number of trees felled in a the disused railway cutting in the suburbs of Bexhill before activists (reinforced by a landy full of stray hunt sabs) climbed over the bridge and forced contractors to stop cutting. The protesters refused to leave after warnings from High Court bailiffs and followed the contractors to their next target a stand of trees to the east, which was already being occupied by a couple of enterprising locals who'd shinned up one tree with a ladder. Flummoxed,the chainsaw boys put their toys backin the van and called it a day.

With trees already falling, people once again gathered on Sunday in Bexhill and in Crowhurst at Adams Farm. Work was stopped in Bexhill with people once again entering the site. But contractors were able to fell a large area of trees before they packed up and left for their compound. Contractors attempted to continue their reign of destruction, showing up at Adams Farm once again. This time activists were in waiting with one man quickly locking on under a pick-up truck with two pairs of hand cuffs, blocking the site's only access point and causing the other vehicles to reverse away in fear of the same fate.

On Sunday forty people turned up to public meeting in the hamlet of Crowhurst about the plan for the bypass. One potential ray of light was the announcement of a new legal challenge by BLINKRR (Bexhill Link Road Resistance) . who claim that the new road is on the actual site of the Battle of Hastings and are aiming to get the whole area re-classifed as a World Heritage Site.

On Monday 17th, resistance continued along the route today with four arrests being made as bailiffs dragged local protesters out of the trees. Action to stop the felling of trees along the route of the proposed Bexhill-Hastings by-pass continued; with locals and activists on the ground preventing work. Tuesday saw locals occupy the disused railway track in Bexhill where treecutting was taking place, work was halted and security guards moved in pushing and shoving, with reports of the private security firm Sher Group dragging people from trees.

On Wednesday trees in the valleycontinued to be felled with activists blocking felling where possible. Rising early on Thursday two defenders were able to take position in a tree overhanging the proposed route of the road, well supplied they set up cover and ropes, greeting surprised chainsaw gangs as they arrived in the area ready for work. Support from locals and activists from across the country is rising, however more people are needed everyday if the road, first of the governments resurrected road building program is to be halted. If you can, travel down for a day or more, accommodation, support and gear is available. Contact Combe Haven Defenders for updates from the ground

The good news is that although the tree-felling has started at the moment the council don't have the money and still have to jump through a few environmental regulation hoops – so the road could still be stopped.

SchNEWS spoke to Combe Haven Defenders “We've been heartened by the reaction of local people – who've come out to resist the chainsaw gangs. We see this as not just a local issue but a national strategic one. We want people to come down and action”

To get up-to-date information of what is happening on the ground and where you might be needed visit the Combe Haven Defenders website http://combehavendefenders.wordpress.com/

The protest camp against the Bexhill Hastings Link Road is now up and running. It's sited at Adams Farm with a number of tree dwellings already constructed along with a well stocked kitchen and even a compost loo. With a skeleton crew over the festive period a call has gone out for more bodies. So if you can get down there do.

This is the first of over 190 roads planned by Cameron and co. and it's among the worst. With around twenty-five security at previous tree fellings just before Xmas protecting just a couple of chainsaw operatives, work is rescheduled to start on Jan 2.

Locals from the village of Crowhurst have come out to show their support.and there's ample wood and other materials for new tree houses and benders.

For Brighton based supporters there's a planning meeting at the Cowley Club, 12 London Road, on Wed Jan 2 at 6pm.

As predicted contractors were back at work today on the Bexhill-Hastings Link Rd being built smack through the middle of tranquil Combe Haven. Despite the fact that the funding for the road isn't yet in place East Sussex County Council seem determined to fell all the trees along the route. But now activists are better prepared and this morning (Monday 7th) issued forth from their makeshift tree camps and managed to significantly disrupt work.

SchNEWS spoke to one of them “We were up and ready for them at six this morning, before it got light. They were trying to cut trees to the north of the second camp. There are three big oaks there that they clearly wanted to fell but we pushed through the lines of security and got people into the trees”

Contractors had brought a JCB onto site, which acted as a target for digger-diving all day. According to SchNEWS' correspondent off the ground “We obviously stopped a lot of what they were planning to do. They were mostly just brush-cutting all day. We were with them until it got dark. I'm not entirely sure what they brought a digger along for but they didn't really get to use it”

There were around twenty police to bolster the numbers of security on site and two arrests were made. By the time of writing they hadn't been released. Earlier in the week police had pressed for one woman to be bailed away from site entirely. In her case magistrates refused as the cops hadn't attached any conditions to her bail when she was first nicked but any future arrestees are likely to face the same draconian conditions – a tactic familiar from the nineties (Anyone remember the Newbury Sausage? - thought not)

Right now the campaign against the bypass is gathering pace – there are now a good number of tree-houses and platforms up and not a few folk on site. But more are always needed.

To find out more