Activists from different networks in Cardiff, including No Borders South Wales, South Wales Anarchists, Gremlins, Travellers groups, Cardiff Migrant Solidarity and the new Network of Cardiff Squatters came together to continue the support shown for migrants in recent months.

Several activists decided to use International Migrants Day this week to respond to a call-out from French activists for actions outside French Embassies and Consulates in solidarity with a recent day of action that aimed to highlight the continued state repression against sans-papier, Roma, the homeless and anti-airport activists in France despite a change of government to a party that spoke out against such actions before they were in power. 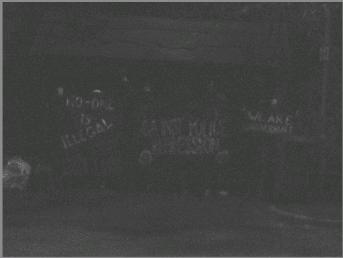 The group blocks the entrance to the consulate 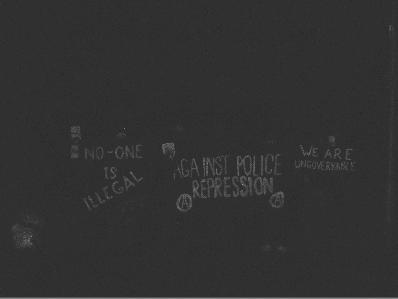 Solidarity is expressed with sans-papier, Roma, homeless and La Zad 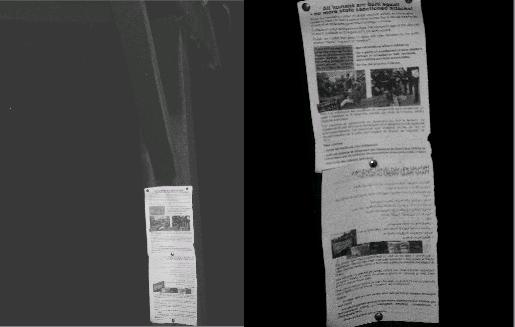 Leaflets are attached to the gate posts in four languages

Activists from a range of groups assembled in the afternoon and walked for an hour to Cyncoed, where the French Consulate in Cardiff is based, getting there just after dark.

Activists took banners that read "AGAINST POLICE REPRESSION", "WE ARE UNGOVERNABLE" and "NO-ONE IS ILLEGAL" and had leaflets in four languages; English, French, Arabic and Welsh, which were handed out and stuck to the gate posts of the consulate, as a symbol of French nationalism was liberated in the process.
The leaflets also expressed solidarity with those facing heavy police repression for fighting against an unnecessary airport near Nantes, in the west of France, and showed concern that our human rights are in danger.

After blocking the entrance to the consulate, in solidarity with those blocked by the French state from decent housing, access to land, 'regularisation' or even peaceful assembling, the group took some pictures and delivered a message to the French consulate, summarised below:

"All humans are born equal - no more state sanctioned attacks!"


One person at the demonstration wrote the following shortly afterwards:

"After deciding that they've heard our message, dropping leaflets through the door of
the consulate just to be sure, we left with the liberated badge, and feel confident that
as groups and networks work together and show solidarity, we reinforce the strength
of our international movement and can be ready to act together whenever the time for
action is upon us."

In fact, as well as on going practical solidarity, Cardiff has seen various other actions in solidarity with migrants since the start of the month, as people also came together to target Citizens UK since they still claim that all child detention has ended, despite increasing calls for more to be done to tackle the abuse that is apparent since the opening of Cedars detention centre in 2011, and the breaking of the Red Lines of the charity colluding in it's operations.

Backed up by evidence, including with statistics from UKBA themselves, the group left leaflets around the hall and spoke to participants about the need for Citizens UK to speak out against Cedars especially if it doesn't want to be the target of further action.


More on this can be read at:


And to read about how No Borders South Wales activists teamed up with comrades in Exeter to target Barnardo's collaborators in the Devon city see: