"Well excuse me for living!" Dutch anarchist and No Borders activist Joke Kaviaar goes on trial in Haarlem tomorrow for "incitement" for her writings over seven years slamming the racist border system in the Netherlands and across Fortress Europe. Anonymous put her site back online, and on the eve of her trial she's released this song on youtube:

http://www.youtube.com/watch?v=JcTGdfVAkCM&feature=youtu.be. This is her story. 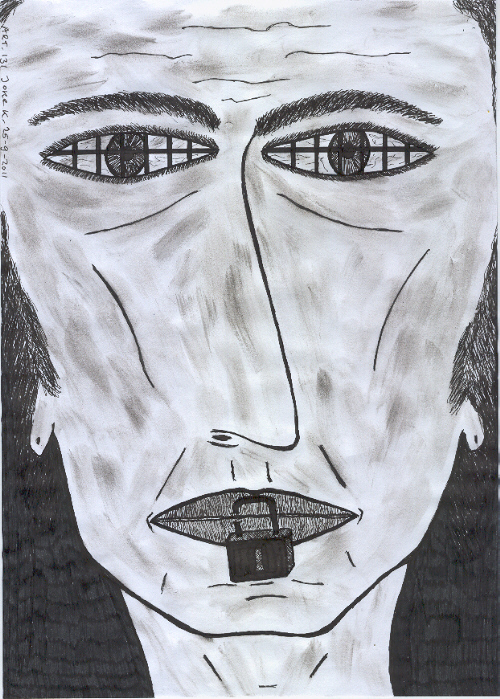 (Joke's blog in English from 26 September, before the new trial date was set. For latest news in Dutch see:

My opinion is incitement! Resist and defy the terrorist state!

On september 13th police came at my door. I opened, expecting the mailman to bring yet another summons. “Nationale Recherche,” they said “Are you ms. K.?”. “Yes..” I answered a little hesitant. “You are under arrest for incitement!” and that was it.

Little over an hour later I found myself in police custody all the way in Zwolle and was held there for three days, under all possible restrictions. Meanwhile, they searched my home thoroughly, made photographs of the house and whatever documents I don't all know about, and took possesion of several computers, hard drives, USB sticks, recordings of poetry performances etcetera.

Now what did I do, according to the charges of incitement with a terrorist motive, to be labeled a terrorist suspect?

Well. All I did was write. I wrote and wrote and wrote over the past seven years, articles, poetry, prose, columns, all in words blaming and attacking the state of The Netherlands and the Fortress of Europe for it's murderous policy against migrants, asylum seekers, so called illegals. For it's detention centers, for it's Frontex hunting people down to drown, for it's racism, nationalism, for it's colonialism, for it's capitalist ideology, it's profits, it's democratic hypocrisy.

Now it seems that some, at least four, of my writings are considered to be call outs for violence against the minister of migration, Leers, against the council of ministers, and against government buildings. It also seems that it is not allowed to say that it is time for a new generation to take over from the 80's and 90's group RARA, that set fires to the MAKRO company to force them out of the South Africa apartheid regime.

Well, excuse me for living!

This repression that I am now facing is however not something new and was to be expected. The Dutch intelligence agency AIVD reported back in 2009 that activism against the Dutch asylum policy was extremist, and I was 'honoured' with a quote in this report, called 'The fire of resistence'. Since then, every now and then either media or politicians wrote and spoke of actions against the IND (dutch immigration office), and companies that are involved in building detention centers. Companies such as BAM, now responsible for building the new deportation camp at Schiphol. Several small arson attacks took place over the past few months. During a similar campaign against a new deportation center at Rotterdam Airport, fire was set to the offices of the building company that were placed at the building site. Responsible politicians and directors of companies were visited at home, just to let them know: STOP.

All groups involved are careful enough not to get caught. Bravo!

Now, in order to try to bring to an end resistance against the Dutch national-socialist immigration policy that is about to prohibit their self invented illegality, a special prosecuter has been assigned to lead all investigations. They have come up with nothing, again, so far.. So, what do they do, to make it seem not all in vain? They arrest the undersigned big mouthed anarchist writer to set an example.

What's next? Without a doubt, I refuse to take offline the texts involved, and I keep my website up and running. That must hurt. So the DA made a phone call to my lawyer and announced: “We are going to arrest her again. Keeping the texts online is a new offence.” Immediately my lawyer protested that this is not possible. Now the DA seems to wait for the lawyers letter, explaining his own laws to him. But this does not mean that I'm in the clear. It's only a stay of execution.

Right now, the texts get spread further, mirror websites are duplicating like cockroaches, and solidarity statements are made all around. Thanks everyone! Ofcourse, i would not in the least bit be surprised if the DA is not amused by all of this, loses patience and sends out that arrest warrant sooner. Also, it is very well possible that police investigators find on my website, or elsewhere on the web, new texts with new reasons for new charges. Some freedom of speech, huh? Is being censored freedom? Is being prosecuted for an opinion freedom? Freedom of speech is reserved for right wing extremist politicians, for racists, sexists, and all the like!

What do we expect of the state that we fight? A friendly face? Ha! Of course not. I predict that this is just the beginning of more opression that migration anarchist activists will face in the (near?) future. We all need to be preparing ourselves to defy, resist, to fight back. There is no reason to not expect repression. After all, it's been going for many years. It took the life of migrants. It made people set fire to themselves. Still the minister of migration thinks he can sleep at night, not bothered by even the least bit of consience!?

Let him lay awake about resistance then!