Justice for the Halesowen 4

A protest was held this morning at 8:00 outside every entrance to Halesowen College demanding justice for the Halesowen 4. David Muritu, Branch Secretary for Halesowen UCU, was dismissed from his job as Maths lecturer at Halesowen College on December 20th. The College failed to follow their own disciplinary procedure or ACAS guidelines (no evidence was presented 3 days in advance of the hearing), without anything other than deductive reasoning (his sacking was linked to results, with no regard for competency procedure or accurate review of statistical significance (his results are above national average). David has been rated as a grade 2 (good) lecturer by the College's own observation system. Three more Maths Lecturers, all of them active UCU members, face disciplinary procedures and the imminent possibility of dismissal. 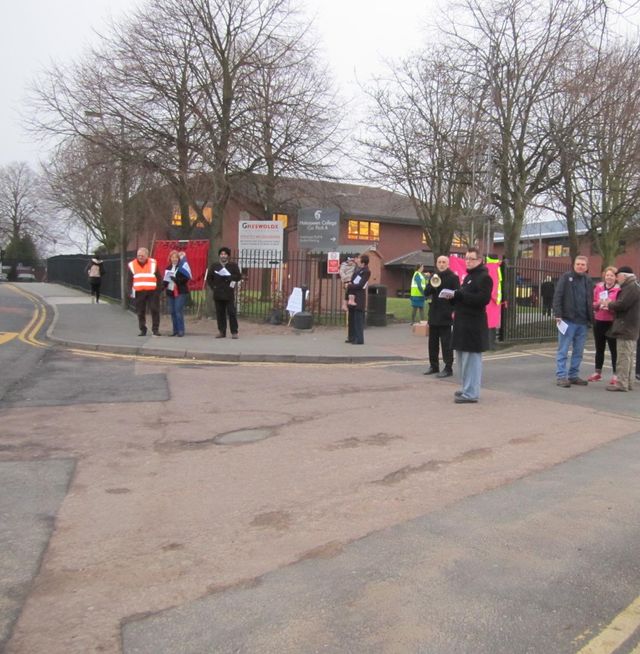 It is no coincidence that this action has been taken against these 4 Maths Lecturers all of whom are active trades union activists.

David has been sacked because of a disagreement with the College Principal Keith Bate on educational theory and politics. The maths department have received considerable lack of support in the face of student needs, including:

* Failure by College management to agree specialist cover in staff absence, in-spite of a substantial surplus which could fund this

* Lecturers doing up to 7 cover slots, with no allowances made for planing and assessment

* Victimisation of a known trades unionist, along with possible victimisation of other known activists in the maths department, setting a precedent for activists to be targeted with knock-on effects for other trades-unionists nationally.

This is an attack on trades unionism and will have disastrous consequences for both students and teachers.

UCU members have voted unanimously to ballot for strike action

Halesowen College Principle Keith Bate can be contacted by email:

There is also a petition

Justice for the Halesowen 4