Bradley Manning was back at Fort Meade, Maryland, US for another pretrial hearing this week and military Judge Denise Lind issued her ruling on the unlawful pretrial punishment motion. This part of the case was dealt with at a long hearing in November and December, during which Bradley Manning gave evidence in person. He spoke about the punitive conditions he was held under at Quantico marine brig in Virginia from July 2010 until April 2011. Many other witnesses testified, including numerous brig staff. The defence motion called for all charges to be dismissed or, failing that, for 10:1 sentencing credit for the time Brad was mistreated.

For more information, see this Indymedia feature on the torture hearing

Brad's court martial continues on 16 and 17 January with another hearing, this time a continuation of the defence motion calling for charges to be dismissed on the grounds of lack of speedy trial. By the time the case reaches trial, put back again to at least 3 June, Bradley Manning will have been held for over three years.

Join the solidarity vigil in London on Wednesday 16 January at 2pm at the US Embassy. 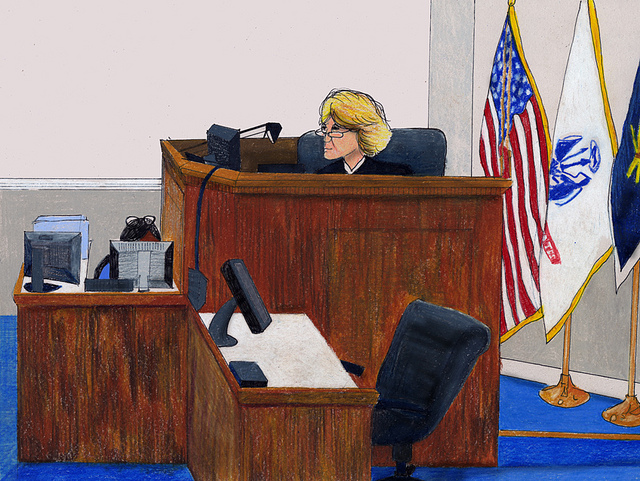 Judge's ruling not available for scrutiny

The verdict on the pretrial hearing in November and December 2012 that considered the question of whether Bradley Manning was subjected to unlawful pretrial punishment was handed down by military judge Denise Lind on Tuesday 8 January 2013. 'Handed down' is perhaps not the best phrase to use since no court papers in Bradley Manning's case - including important rulings like these - are available to the press or public. This situation is currently the subject of legal challenge by the Center for Constitutional Rights. What happened is that Judge Lind took over an hour and a half without breaks to read out her judgment while those reporters in the court or in the press pool next door (and some had gone home having been told the ruling was unlikely to be delivered that day) tried to get down as much as they could to share with the public. If the US government is doing things properly and has nothing to hide, why on earth would it deny the public access to court documentation?

112 days off a possible sentence of life without parole

Lind rejected the defence call for all charges against Brad to be dropped but did find some limited evidence of unlawful pretrial punishment and gave day for day credit for 112 days of his confinement at Quantico, finding that both brig commanders CWO James Averhart and CWO Denise Barnes had abused their discretion regarding Brad's treatment. Since he's facing possible life imprisonment without parole, 112 days is a rather empty gesture and the one-for-one equivalence seems to imply that he can expect to be tortured if convicted: one day of torture at Quantico presumably being worth one day of torture after sentencing. BMSN explains how the credit is broken down:

"Judge Lind has granted credit for the 7 days Bradley was kept on suicide risk watch against Navy Rules, 75 days from November 1 to January 18 when he was kept needlessly on Prevention of Injury watch, and 20 days from April 1-20 when he was forced to remove his underwear at night. Lind said Bradley’s confinement was more rigorous than necessary and that it became excessive in relation to legitimate government interests."

Judge Lind also gave 10 days credit for the fact that Brad wasn't given enough time each day for recreation or exercise from 29 July to 10 December 2010, finding this was a "minor" infraction and not worthy of 1 for 1 credit. For over four months, Brad was afforded a mere 20 minutes recreation/exercise a day, just one third of the usual minimum of one hour; when outside he was in full restraints and required the assistance of a guard to stay upright; in addition, he was not allowed to exercise in his cell. Doesn't seem very minor to me.

Only a few aspects of Brad's mistreatment acknowledged as such

Judge Denise Lind didn't acknowledge most aspects of the abusive treatment Brad was subjected to in Quantico and seems to have been unable to see them as together forming a pattern of abuse; she has apparently chosen to believe instead the inconsistent testimonies of brig staff and to have ignored obvious signs that Brad was being tortured. However, even her limited findings of unlawful pretrial punishment give the lie to President Obama's statement in March 2011 that Brad's treatment at Quantico was "appropriate" and "meeting our basic standards".

The comment by Brad's mendacious, two-faced 'counsellor' at the Brig, Craig Blenis in an email: "We just felt like being dicks"; the fixed C&A Board; the "shark attack" by guards the day after a protest outside the brig; the decision of brig commander Denise Barnes, ratified from above, that Brad's underwear should be removed after he made an ironic comment in an effort to communicate his frustration with the ongoing POI status; the decision to hold Brad long term in solitary confinement, without daylight, denied adequate exercise, without personal effects in his cell, for some of the time without even his glasses or underwear; the decision to afford Brad no privacy even on the toilet, to make him sleep with a bright fluorescent light in his eyes lying on a suicide mattress with no pillow and wearing an uncomfortable suicide smock; to wake him up repeatedly if he turned over during the night; all these and more, continuing over an extended period of time and seen in the context of military detention where a vulnerable, isolated prisoner was at the mercy of a rigid and sometimes vindictive brig hierarchy carrying out the wishes of the US government even when that meant acting improperly and causing harm, should have led Lind to the conclusion that Brad was being tortured by brig staff with the blessing of those at the very top. By failing to recognise so many of the abuses, Lind invites the military to torture future detainees who dare to speak truth to power.

The US government was held to have "legitimate objectives", no unlawful command influence was found and there was "no intent to punish the accused by anyone on the brig staff". Lind found that denying Brad an unmonitored visit with the UN Special Rapporteur on Torture Juan Mendez and with Congressman Dennis Kucinich was not punishment. Nor was the C&A Board that discussed and made recommendations on Brad's custody status responsible for any unlawful punishment according to Lind. Incredibly, she also found that Gunnery Sgt. Craig Blenis (since promoted to Master Sergeant), had no bias and had not attempted to influence review board decisions. To have reached this conclusion, Lind can only have been asleep or wilfully not listening during Blenis' testimony and relevant parts of others'.

Blenis both made recommendations to and was a voting member of the three-person board, a practice which investigating officer Abel Galaviz said was wrong:

"the individual making the recommendations should not also be serving as a board member."

Blenis may have been acting on implied or explicit orders from above (although Lind found the C&A Board had acted independently), but in any event he was instrumental in keeping Brad on MAX POI and he lied to him about it, all the while presenting himself as Brad's counsellor and 'advocate' in the brig, and causing Brad to mistrust his psychiatrist who was truthfully telling Brad he was recommending he be removed from POI. Blenis also blocked a parcel for Brad because "we felt like being dicks" and rather than admit under oath that referring to Brad's undewear as 'panties' was inappropriate and homophobic or transphobic, he claimed that this is what he called his own underwear. He was not the only brig official to make this claim. Evidence was presented to the court that officers were joking in emails about Brad's mistreatment, yet Lind didn't consider there was any culture in the military that would have led to Manning being punished. Oh really?

On the emails, Lind said:

"Any comments that may be perceived as derogatory statements made about the accused in emails between the Brig staff were de minimis, were not communicated to the accused or any other prisoner, and were not humiliating to the accused. No sentencing credit is warranted."

There is no recognition by Lind that these emails were evidence of the brig officials' appalling attitude towards Brad.

"[R]esearchers in this country have routinely defined solitary confinement as the practice of placing a person alone in a cell for 22-24 hours a day with little human contact or interaction. The U.N. Special Rapporteur on Torture has also adopted this definition in a groundbreaking global study on solitary confinement... which called on all countries to ban the practice, except in very exceptional circumstances, as a last resort, and for as short a time as possible. Not only does segregation in a cell by yourself for 22-24 hours a day fall squarely within the definition of 'solitary confinement,' the practice is well recognized as painful and difficult to endure."

Although Judge Lind makes much of the US government's "legitimate concern" to ensure Brad doesn't harm himself and is brought to trial, the effects of long term solitary confinement are themselves harmful and liable to cause mental breakdown to the point where a detainee is unfit to stand trial.

No way out of Maximum Custody at Quantico

The following day, 9 January, Judge Lind added a couple of sentences to her ruling, as she seemed to have forgotten to rule on whether it was OK to keep Brad in MAX custody for the whole of his time at Quantico. The addition to the ruling was that the

"decision to maintain the accused at MAX custody throughout his confinement at Marine Corps Brig Quantico was based on the individualized considerations of the accused and the SECNAV Instruction factors. This was neither an indiscretion or a violation of Article 13."

Brad has been on medium custody ever since moving from Quantico and the only notable change I can recall in April 2011 is that his torture stopped with the move. So unless the SECNAV instructions allow for considerably harsher treatment than the equivalent army regulations, which would raise many questions about the reasons for sending Brad to a marine brig in the first place, everything seems to hinge on the difference between Quantico and Leavenworth.

Tortured by excessively restrictive detention in solitary confinement on MAX POI or suicide risk and supervised by brig staff who used anything he said against him to further his mistreatment, Brad was in a Catch-22 situation at Quantico brig. His successful transfer to medium custody, no POI or SR at Leavenworth is the clearest demonstration that the problems lay not with Bradley Manning, his charges, background or behaviour nor, I would speculate, with military rules and regulations governing his detention, but with those holding him at Quantico and the instructions from above they were acting upon. That Judge Lind doesn't acknowledge this doesn't mean it's not true.

For more on this ruling, see:

For accounts of the rest of the hearing beginning 8 January, see: