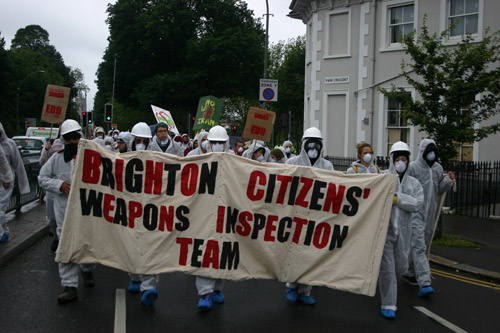 
The Crown Prosecution Service Complex Casework Unit in Maidstone has
cleared four Smash EDO protesters of public order charges after finding
'no realistic prospect of conviction'. The decision came on 3rd January
2013 just weeks before a five day trial was due to begin in Brighton
Magistrates Court next month.

The four were arrested on 16 July 2012 as they tried to carry out a
'citizens weapons inspection' of Brighton arms firm EDO MBM Technology
Ltd, a subsidiary of giant US owned arms company ITT Exelis.

Smash EDO believes the firm to be involved in perjury, fraud, illegal
exports of weapons system technology and the assistance of war crimes. The
group has carried out a political direct action campaign to expose the
company's activities and have it shut down since 2004.

Six other protesters were also arrested at the attempted weapons
inspection, and were held for several hours. These cases were dropped
almost immediately, or at first appearance in court by the CPS, due to
lack of evidence of any criminal activity.

These other arrests included an alleged breach of bail by a protester,
despite the fact she showed officers an official bail notice that proved
she was not breaching her conditions, and arrests for obstruction of the
highway, even though the highway was already blocked by a massive police
mobile steel cordon designed for serious public emergencies. The
protesters were prevented from reaching the factory on Home Farm Road,
Moulsecoomb, Brighton, by the cordon which was used to wall off the
factory.

Three different police forces were involved in the chaotic policing of the
event. A draconian police order under Section 14 of the Public Order Act
specified a deadline for the end of the protest and the site of a
designated protest zone. This was authorized several days before by a
senior Sussex Police officer on questionable grounds. On the day paper
notices of this order were invisible, and in any case police did not even
follow the conditions it set out, as protesters were arrested before the
deadline had even expired.

Maps and descriptions of where the designated protest zone was were absent
or confusing, with the police even forcing protesters away from the area
they were being ordered to protest by the Section 14 notice.

While ten were arrested altogether. The four that were cleared this month
had locked themselves to the steel corden before being arrested and taken
into custody.

All ten of those arrested were subjected to extreme police bail
conditions that prohibited all communication and social contact between
them after their release from Hollingbury Custody Centre, on penalty of
arrest and imprisonment if breached. These conditions were later varied by
a court on the grounds that they were unjust.

Solicitor for the defendants Lydia Dagostino, of Kelly's Solicitors, said

"In this case we challenged clear abuses of police power over fundamental
freedoms of expression and assembly at an entirely peaceful protest
action. We may never know the exact reason why the Crown decided they
could not win this case so late in the proceedings, but their statement of
'no realistic possibility of conviction' suggests a lack of evidence
against our clients was a significant factor in their decision not to go
on."

" This is another legal victory for Smash EDO, but the abuses of police
power exposed in this case will not be easily forgotten."

" While Sussex Police have abused their powers for years in this way to
prevent legitimate acts of protest by Smash EDO, they have at the same
time turned a blind eye to the criminal wrongdoings of EDO MBM Technology
Ltd and its parent ITT Exelis Inc. These include perjury, illegal arms
exports, fraud, and complicity in war crimes by US, UK, and NATO, and
Israeli air forces.They also continue to assist the UK in arming human
rights abusing regimes such as Saudi Arabia, Bahrain, Oman and others in
spite of its international obligations not to do so."