As an ex-resident of Barnet, book-lover and fan of occupying, squatting and doing things for free, I went along to Friern Barnet's Occupied People's Library the other day to take some photos, borrow a couple of books, have a cup of tea and inform myself about what's been going on there. 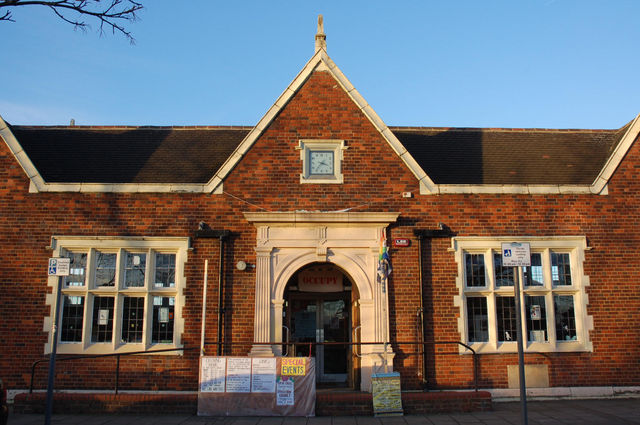 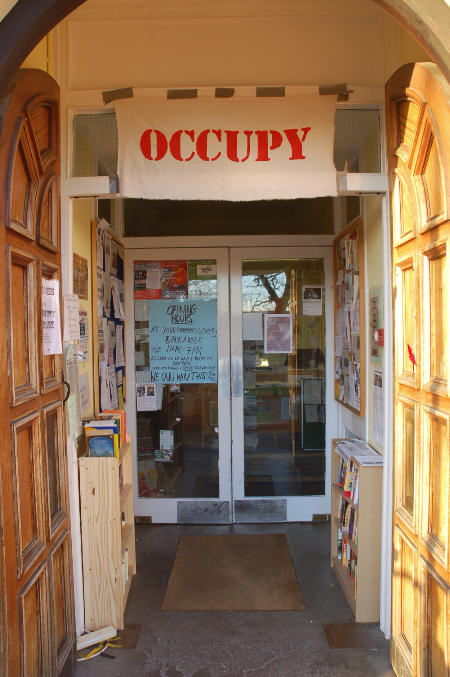 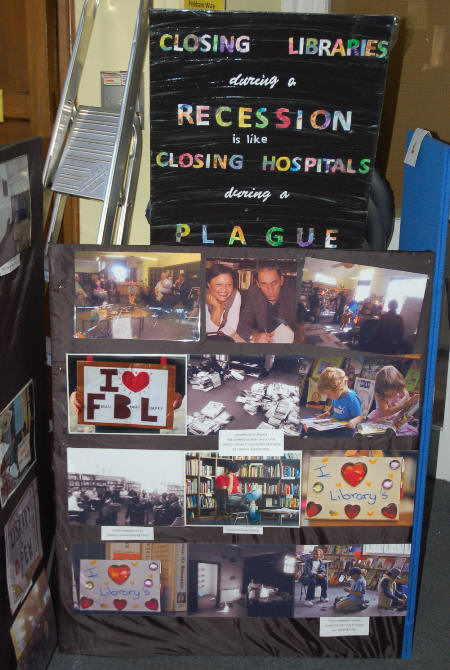 Closing libraries during a recession is just stupid 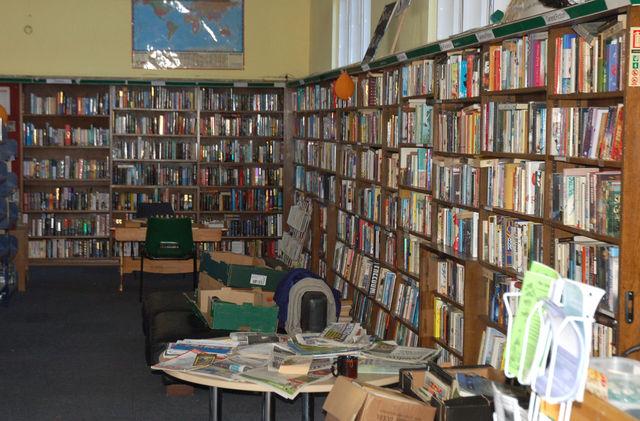 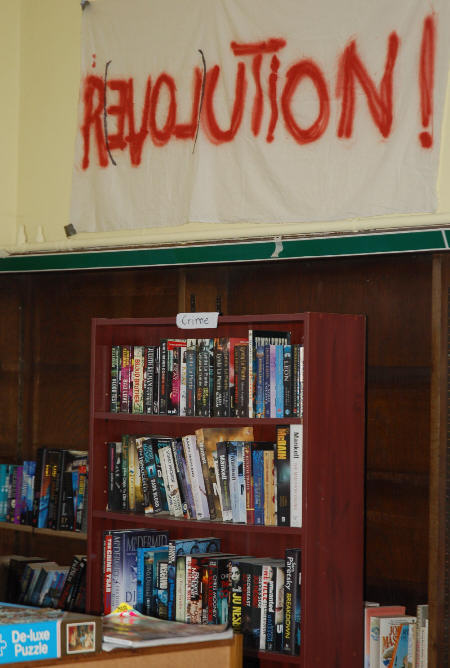 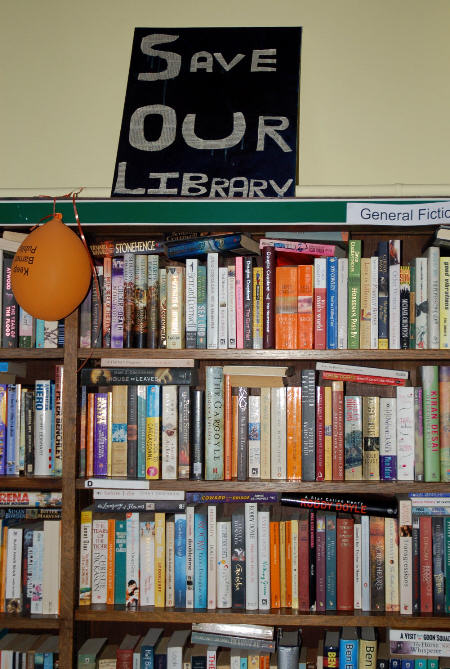 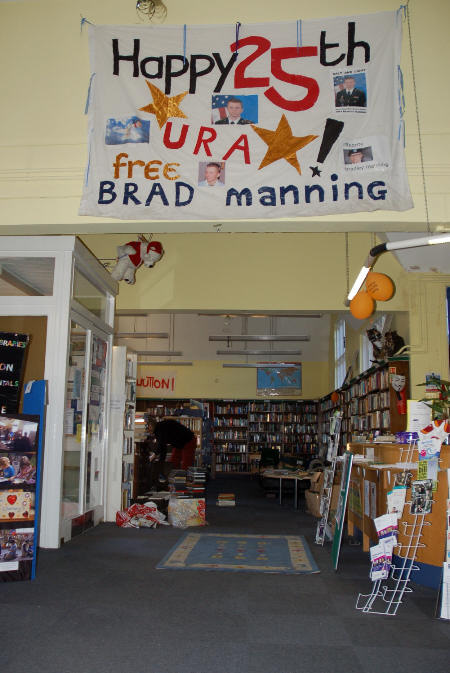 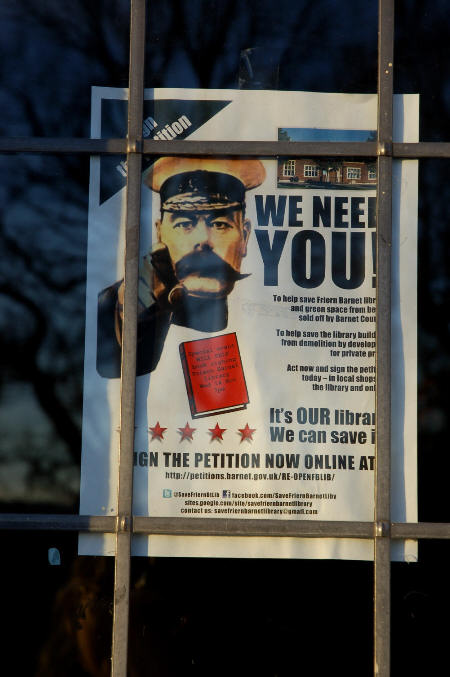 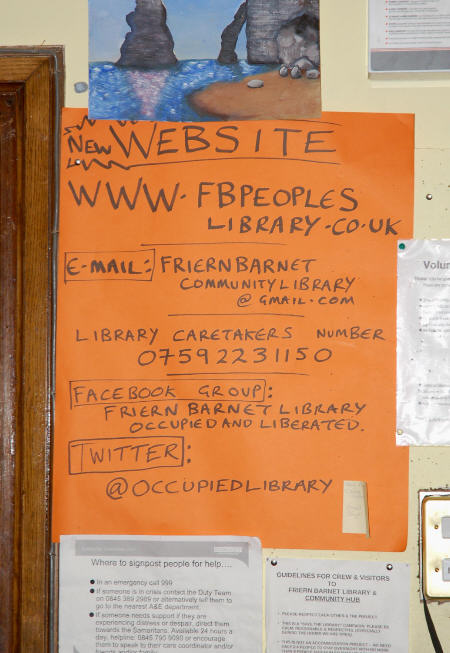 Last September, a small group of Occupy squatters moved into Friern Barnet Library in the north London Borough of Barnet. The library had been closed in April 2012 as part of a round of council spending cuts with plans to sell the land to a private developer. At that time, the plan was to merge with North Finchley and open a 'Landmark' library in conjunction with ArtsDepot at Tally Ho. Locals opposed this plan, but in any case the project collapsed after council negotiations with ArtsDepot broke down and closing Friern Barnet library before ensuring some alternative was available left residents high and dry. The occupiers, working alongside the Save Friern Barnet Library Group and other supporters set to work and reopened the building as a library and community space in September.

Completely emptied of books when first occupied, the shelves are now full and books continue to be donated by supporters. The space is open six days a week from 11am to 7pm and hosts regular and one-off activities, groups, workshops, meetings etc. As well as books, the library has computers, chess, jigsaws and something all libraries would benefit from: tea and coffee making facilities.

Inadvertent support for 'The Big Society'?

One indymedia poster voiced some concerns about the occupation and how it might be exploited to push the Tories' 'Big Society' agenda. The argument was that local campaigners who resisted the closure had been calling for a properly funded local library service as before while the occupiers were happy to see the whole thing run on voluntary effort and it was suggested that this latter approach was inadvertently supporting cuts to public services. Whether or not this analysis was correct, the current position seems to be that the occupiers are seeking a licence granted to local people to allow the library to be operated by the community with guaranteed funding to cover overheads and one full time professional librarian employed to support them. A joint statement with local campaigners reads:

Library campaign groups working with the Occupy movement and the local community share a common aim: that Friern Barnet library should be re-opened in the existing building by Barnet council and preserved as a fully funded library and community space with the direct involvement of local people in the decision making process. The occupation of the building is a direct action that has highlighted the massive community support for Friern Barnet library, and has challenged not only its closure but the entire One Barnet programme and the privatisation of our public services in general.

The occupiers' current position is set out in this YouTube video [from 2:30].

This might look like a single issue campaign but the fight to save a library and community space in Barnet has wider relevance. Barnet Council is attempting to roll out the most extensive privatisation programme ever attempted by a local authority in its One Barnet abomination which, if it goes ahead, may well be followed by other councils around the country. Disingenuously presented as a needs-led initiative:

what's actually being planned is the wholesale sell-off of public services to private companies in two packages: Development and Regulatory Services and New Support Organisation / Customer Services Organisation, with Capita the preferred bidder. John Dix explains in this YouTube video how public accountability will be lost as information about key public services will become 'commercially sensitive' data the public won't be allowed access to.

However, One Barnet hasn't happened yet since in December, just as the policy was about to be given the go-ahead, one Barnet resident sought a Judicial Review of the whole programme on a number of grounds, with proceedings formally issued in January against Barnet Council, Capita PLC, EC Harris LLP, and Capita Symonds Ltd. It's worth noting that the solicitor involved in this case is, as Mrs. Angry of Broken Barnet explains:

Gerald Shamash, who has acted as solicitor to the Labour party for more than twenty years...

New Labour, of course, is no stranger to privatisation programmes and it may mean that this action is more about political point scoring than anything else. Time will tell.

Meanwhile, back at the library

Early in December, campaigners succeeded in ensuring that the library building was added to the Council’s Schedule of Buildings of Local Architectural or Historic Interest and listed as a Community Asset, making it more difficult for the Council to sell it off for development, but ironically giving the judge in the council's possession hearing against the occupiers spurious grounds to override their human rights (Articles 10 & 11) as explained in this report on the ruling. More on the hearing here. However, Judge Pearl also ruled that enforcement of the possession order she awarded to the council could not take place for six weeks (ie not before the end of January) to allow time for negotiations to take place around the possible issue of a license by the council.

The council continues to cock things up

Since then, the council's position has been far from clear. In response to the court ruling, five representatives of Friern Barnet Community Library offered to enter into direct talks with the council over obtaining a licence for the building to be run as a library again with public funding and community control and support. However, on 8 January, an article in the Barnet Times stated that

The local authority announced this afternoon it will hand a licence to CommUNITY Barnet, a charity supporting voluntary organisations in the borough, which will run the building in the interim. The charity will take charge of the library until February and has been asked to co-ordinate community groups looking to take over the building in the long term.

The article also reported that the Barnet councillor with responsibility for libraries, Robert Rams had stated

that it would be up to CommUNITY Barnet whether or not it chose to hold discussions with the library’s current occupiers.

This was clearly ludicrous, both in terms of the conditions attached to the possession order and the status unlilaterally given to CommUNITY Barnet, which it later categorically denied as reported in another article in the Barnet Times.

From a piece run on the council website on 8 January, the council appeared to be paving the way for a competitive bidding process, quoting Rams again as saying:

Community Barnet seems perfectly placed to support groups of local residents in becoming properly established and able to develop a 'Right to Bid' proposal. I understand that they have already had an approach from a potential group. Ideally we would only have a single bid but we could consider more than one...

and suggesting that "the success" of One Barnet was going to make financial support possible:

"I’d like to stress," said Councillor Rams, "that because of the success of the One Barnet procurement process we have more contractual savings than we expected and the council is in a different financial position than when we started our library review. We also have slightly less pressure on our capital budget which gives us the scope to look favourably on bids for the building from local residents."

Since the council has known about the legal challenge to One Barnet since December, calling it a "success" is a downright lie.

At a meeting in the library on 10 January, Customer Services Officer Bill Murphy was sent along to announce a "significant shift" in the council's position, which could perhaps be read more accurately as "trying to undo some of the damage done by Cllr. Rams." See this YouTube footage of Murphy's presentation where, after trying to present a more reasonable position than that outlined by Cllr. Rams, he smugly goes on to explain how the council will be "marketing the building" both to the community and the private sector and moving to evict the occupiers before any licence is considered. This post on the Broken Barnet blog gives more detail and analysis.

The struggle goes on

This story will continue unfold over the next few weeks and is likely to hot up around the end of January/beginning of February, when the council may move to attempt eviction if agreement has not been reached on a licence by that time. More legal moves by the occupiers are also likely.

More on this story

And don't forget that it's National Libraries Day on Sat 9 Feb.