The many disguises of Harry Matz 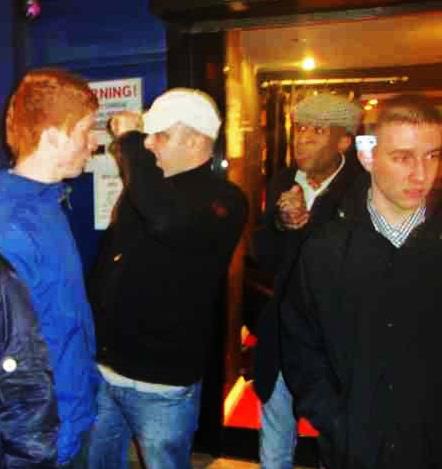 Matz (white cap) on an EDL outing in London

Harry Matz will be better known to some as 'Harry Burns', 'Jerry Lancaster', 'Andy Hughes' or 'Arry Ajalami'.

Matz, 38, from East London is the son of German Jewish immigrants on his mother's side and Morrocan/Welsh on his father's side, taking his mother's maiden name after she divorced his father in the 70's.

He purposely presents a purposely confusing image of himself, sometimes anti-racist, sometimes racist, sometimes left, sometimes right, but the plight of the Palestinian people is most definitely a subject that he refuses to be drawn into. On occasion he will express a dislike for Israel and has been documented making anti-semitic remarks.

This is not a genuine uninterest in Israel's aggression towards Palestine or a genuine hatred of Jewish people. This will be obvious to those who know Matz, his past, and his family history.

Matz went as far as to disown EDL's own ultra-Zionist lunatic, Roberta Moore. He declared that this was due to Roberta Moore's hatred of all things Islamic, rather than admitting publicly that Moore was giving Zionism a 'bad name'. Both Gatward and Matz expressed a concern over Moore's antics at the time.

Towards the end of 2010 Matz announced that he would be leaving the English Defence League. This announcement was a bluff. Matz continued to admin the EDL West Ham Division Facebook page and to help arrange meets and demos. Though the West Ham Division page no longer exists, Matz continues to help organise EDL events in London and passes information on to EDL leadership.

Mazt (billed as 'Harry Burns') backed out of a Quilliam event at which he was due to speak as an ex-EDL member, possibly worried that his continued involvement with EDL would be leaked. Privately Matz admitted that while nobody else was going to do anything about Islam he would remain EDL.

Matz involved himself in other projects, NiceonesUK, the Anti-Extremism Alliance and the Cheerleaders. In 2012 Matz once again announced he would be parting company with these groups. Unable to push his anti-Islam agenda quite as freely as he liked, he decided to go it alone.

Matz now controls the anti-Islam blog 'The Islamic Far-Right In Britain' where he is able to concentrate on the demonisation of mainstream and peaceful Islamic organisations.

If there was no relationship between Matz and the Zionist blog, Harry's Place, before, then there certainly is now. Harry's Place have published information and articles from Matz's blog to aid their own witch-hunt of British Islamic organisations.

Not by coincidence, Matz then announced that his real name was Andy Hughes, and not Harry Burns. Hughes is Matz's father's surname. With the Zionists at Harry's Place taking an interest in his work, Matz would have felt that the 'Harry Burns' moniker was a little too close to his real name for comfort.

Matz has played a very shrewd game. It's possible that he has hoodwinked close friends and allies that his hatred of Islam and Muslims is not driven by his love of Israel and Zionism. Those that know him will know that Zionism runs deep in the Matz family.