Long term Parliament Square peace campaigner Barbara Tucker has lived round the clock opposite the Houses of Parliament for over 7 years. She has slept in the open for over a year now without a tent and has been treated for exposure. She is on a hunger strike in the hope of getting her confiscated tent back. 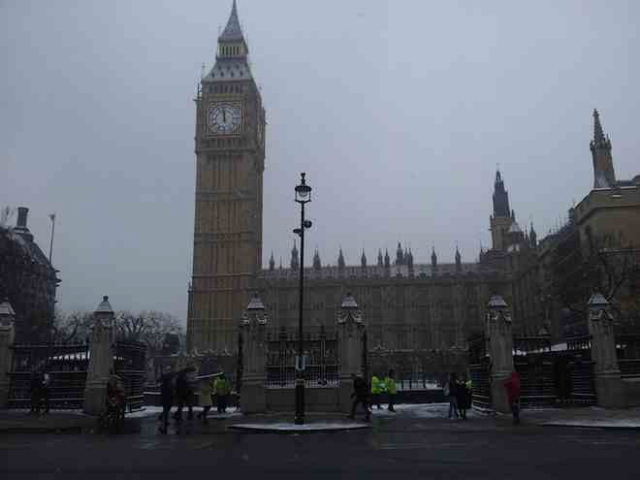 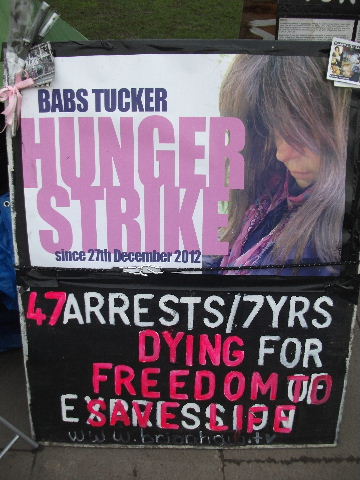 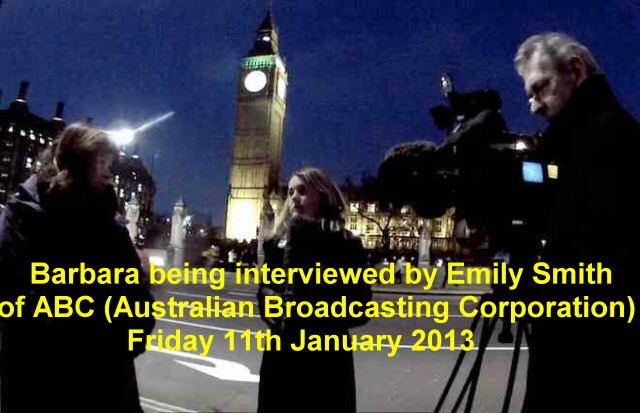 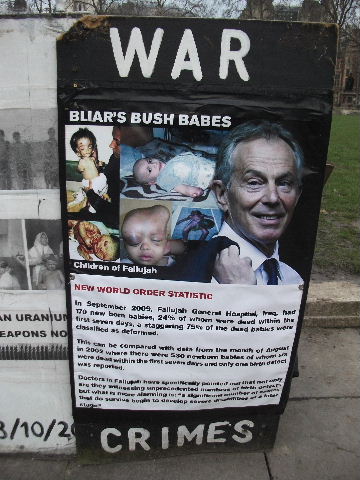 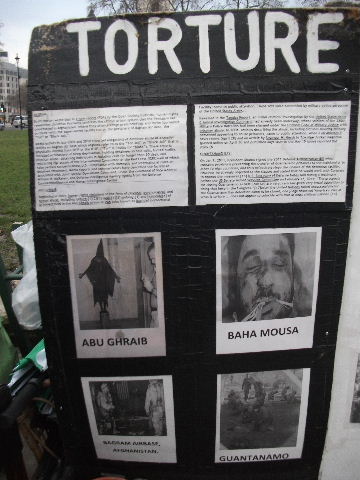 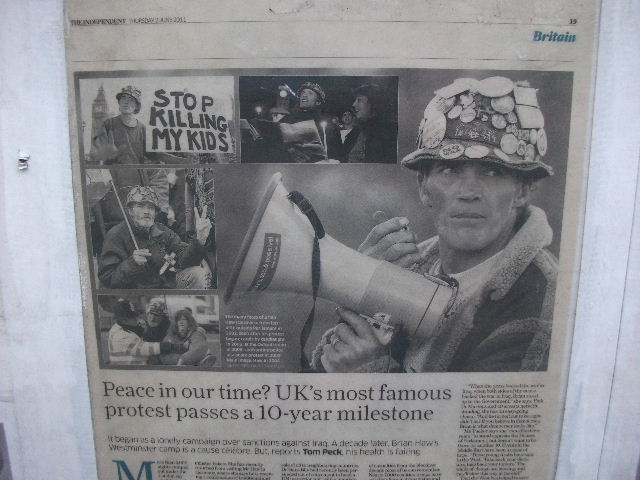 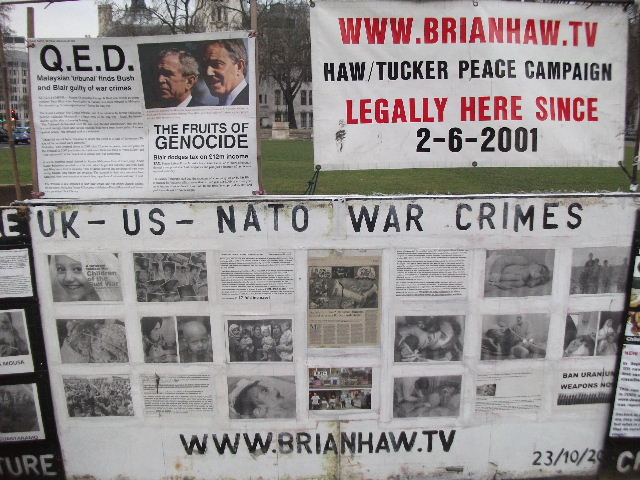 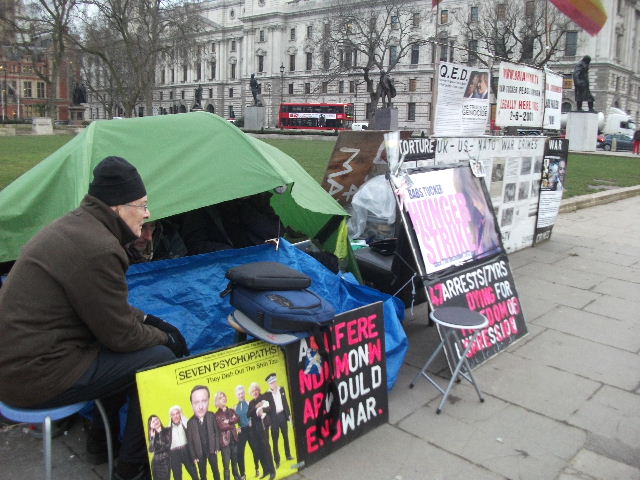 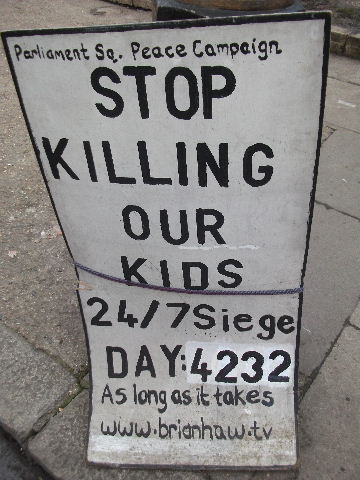 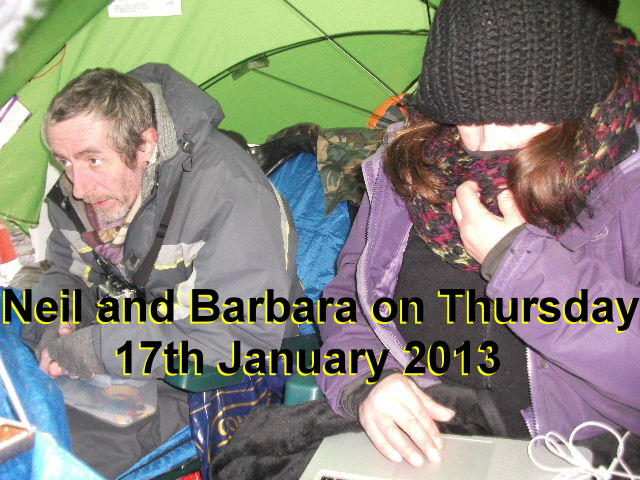 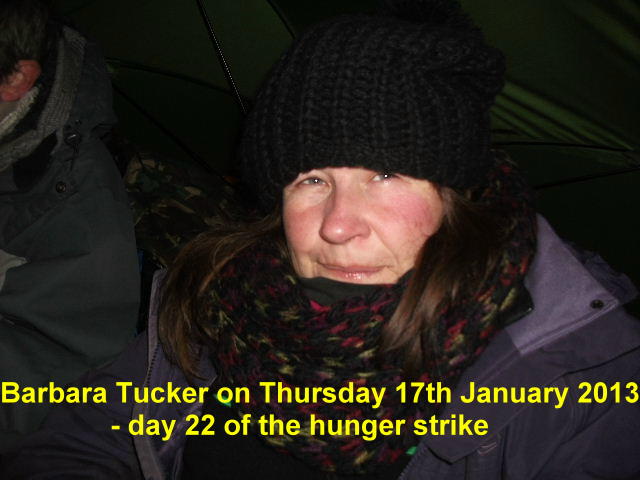 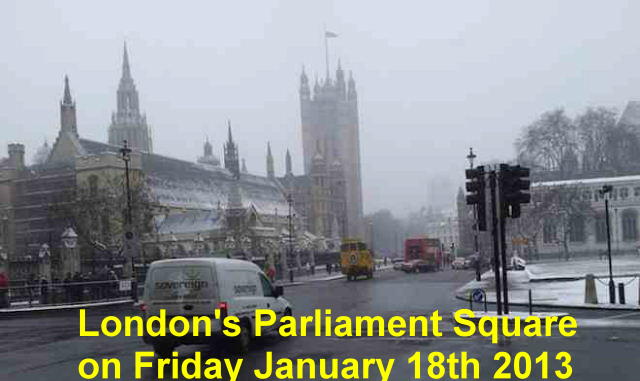 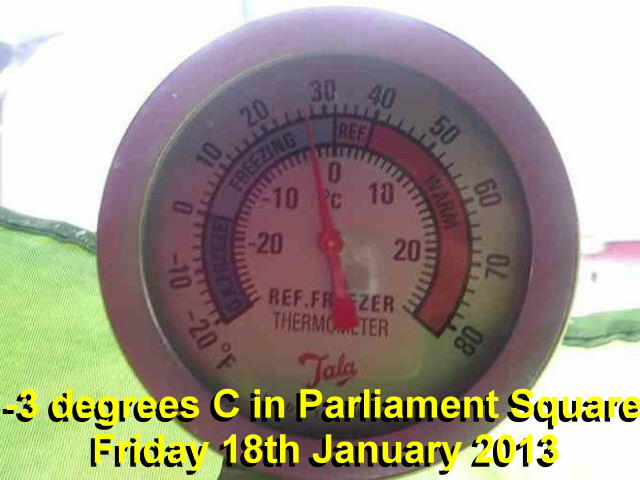 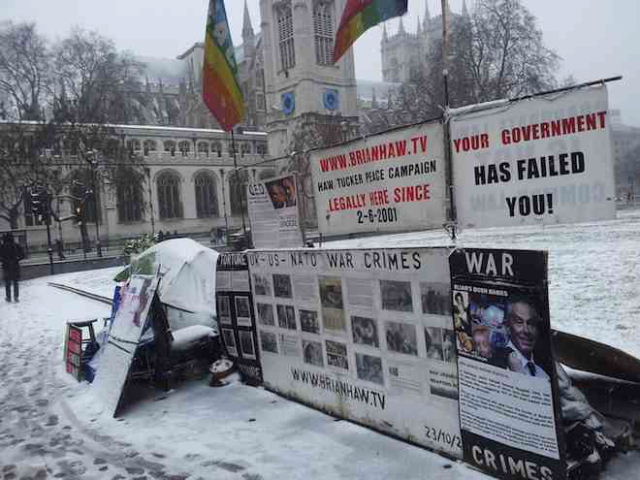 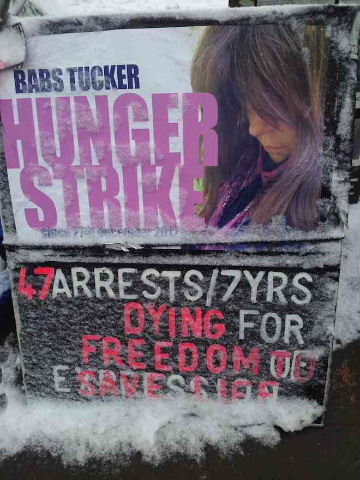 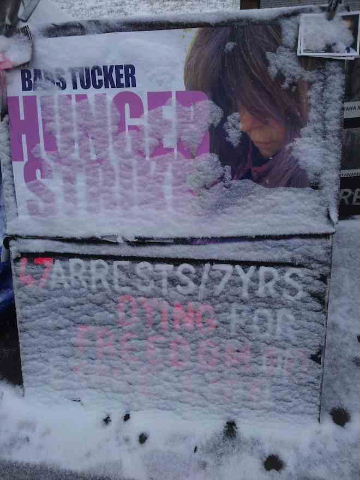 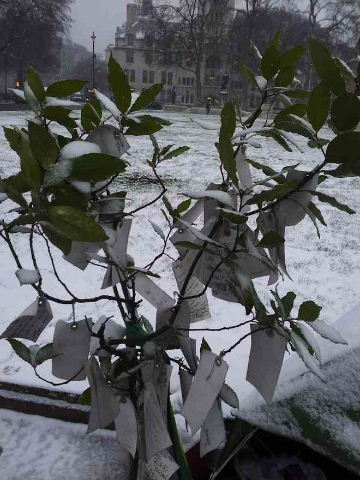 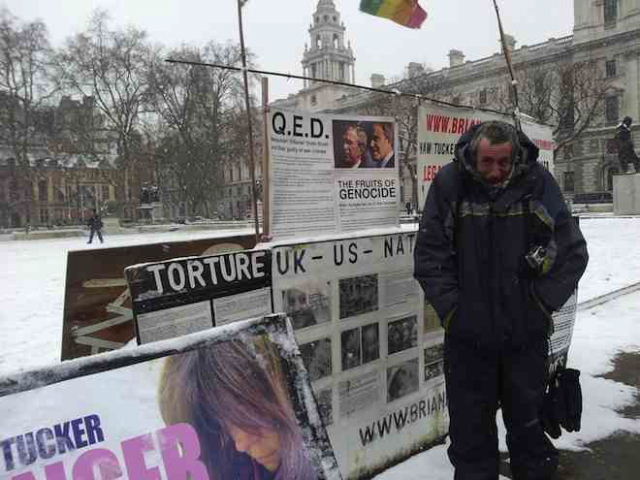 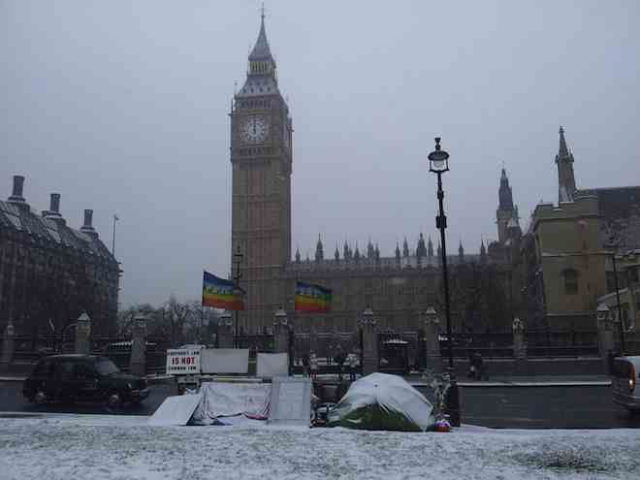 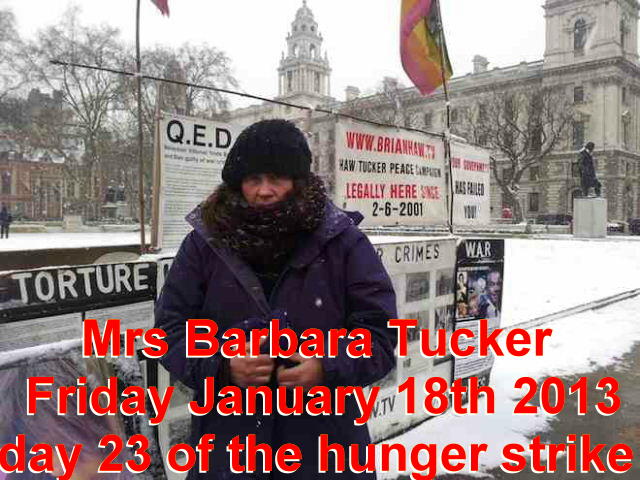 
As a blanket of cold descends upon the capital, the long term Parliament Square peace campaign opposite the Houses of Parliament continues in sub-zero temperatures without a tent and only the shade of a green umbrella for protection against the elements.

Now in its 12th year it was instigated by the late Brian Haw in 2001 who was originally protesting against the sanctions on Iraq which at the time had claimed the lives of half a million children.

Brian’s protest caused the authorities no end of problems as he and his anti-war placards and banners were a constant reminder of all the lies that were told in the run up to the attack on Iraq in 2003. Members of Parliament had to pass his huge collection of displays and peace messages every time they went in and out of the Parliament. Many of them were unhappy about being reminded of the flimsy case for war.

The television and newspapers were likewise unenthusiastic about Brian and his campaign which received scant media coverage.

Then Home Secretary David Blunkett introduced the bill SOCPA (Serious Organised Crime and Police Act 2005) which was aimed at removing Brian by banning protests with 1 km (about half a mile) of Parliament without police permission. The legislation was poorly drafted and Brian successfully argued in court that the act did not apply to him as his campaign predated it and the law could not be applied retrospectively.

His campaign was eventually reduced in size in May 2006 from 40 metres to just 3 metres by a night time raid of some 78 police which cost a staggering £27,000.

Brian continued to protest with his truncated display despite numerous arrests and assaults. He was joined in December 2005 by Melbourne born Barbara Tucker who has remained to this day.

Although he incurred the wrath of the politicians he was an inspirational figure to many in the peace movement and he won the Channel 4 News award for Most Inspiring Political Figure of 2006 garnering 54% of the votes cast. At a gala evening in February 2007 introduced by news presenter Jon Snow and attended by the likes of former cabinet ministers Jonathan Aitken and Charles Clark, Private Eye editor Ian Hislop, future First Minister of Scotland Alex Salmond, Brian with Barbara Tucker in support accepted his award. Gen Sir Richard Dannatt, then head of the British Army, who embarrassed the Government by saying troops should be withdrawn from Iraq, came second with 18 per cent. The Archbishop of York got 12% while Tony Blair was backed by eight per cent and David Cameron by six per cent.

Brian sadly passed away from cancer in June 2011 after which Barbara has continued at the helm. Mrs Tucker or `Babs` has been arrested an astonishing 47 times in her 7 years in the square, usually on charge of `unauthorised demonstration`.

She has served two short spells in Holloway prison as well as suffering constant harassment from police, heritage wardens and passing rowdies.
Until January 2012 she had a tent but that was confiscated under the Police Reform and Social Responsibility Act (PRSA). Since then she has slept in a chair on the pavement and now tries to sleep under a large green umbrella wrapped up in multiple layers of clothing.

Barbara took the decision to go on hunger strike in the hope of getting her tent back, starting on December 27th 2012.

The British media tend to ignore the campaign though there has been coverage on foreign TV stations.

I have tried to get the mainstream media interested in this remarkable campaign but with limited success. The Independent did a two page spread on day 3,000 in August 2009 when Brian was still alive and another piece on the 10th anniversary on June 2nd 2011, shortly before Brian died. The Evening Standard has done several short pieces while the most incredible response came from the news desk of the Sun (this from a London based journalist remember) who asked “Where is Parliament Square?” (!!).

Since Barbara started her hunger strike the London Evening Standard had a small piece on page 32 on Friday 4th January while Iranian Press TV did an interview on the same day. The mainstream newspapers were largely uninterested, the news desk of the Times rather callously saying “We don’t do hunger strikes.” The BBC has nothing, not even on its website. A hunger strike outside the Canadian Parliament in Ottawa by native American Theresa Spence did get on to the BBC website but the Westminster one has been effectively blacked out.

Australian Broadcasting Corporation (ABC) did an interview with Barbara on Friday 11th January which was expected to be shown on their rolling 24 hour new service.

From the Evening Standard of January 4th 2013:


Barbara gave her reasons for going on hunger strike:

“My name is Babs Tucker.

I have been campaigning in Parliament Square, with Brian Haw's Parliament Square Peace Campaign, 24/7 for seven years, during which time I have been unlawfully arrested 47 times and imprisoned twice without trial in Holloway Women's Prison in North London.


Our campaign's 24/7 presence reflects the fact that while wars rage and Parliament continues to only sit part-time, with many long breaks, the people do care about one another, all the time, in all weather.”


You can read the full statement on:


Barbara is strong willed and is likely to see this through. She does not want to die and I do not want her to die. The situation should be closely watched in the coming weeks and I would urge those interested and sympathetic to write to their MPs and to Mayor Boris Johnson and badger the media to give this brave woman some decent media coverage.