in what was probably the first protest to be held 72 floors above london on the newly opened viewing floor of the shard, local housing activists and occupy protestors were questioned by security after holding up small placards and donning an anonymous mask. 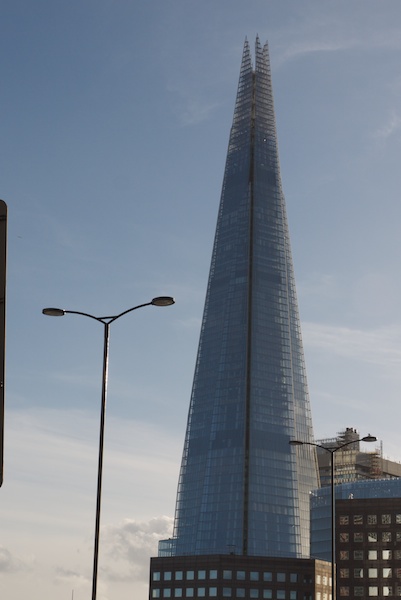 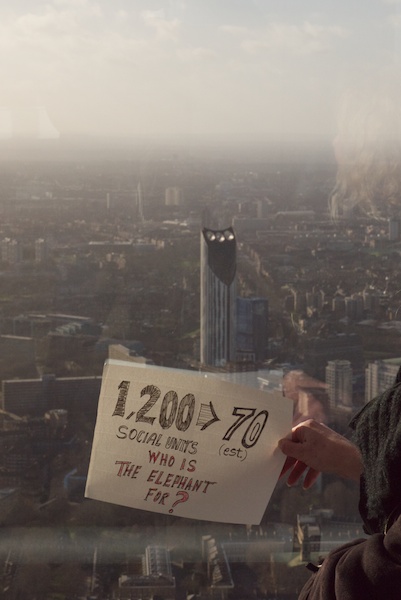 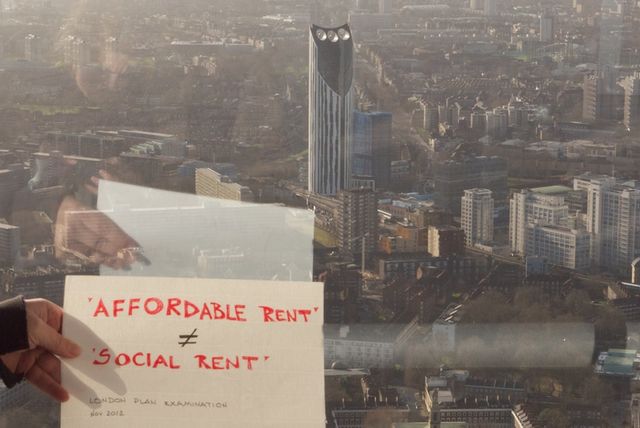 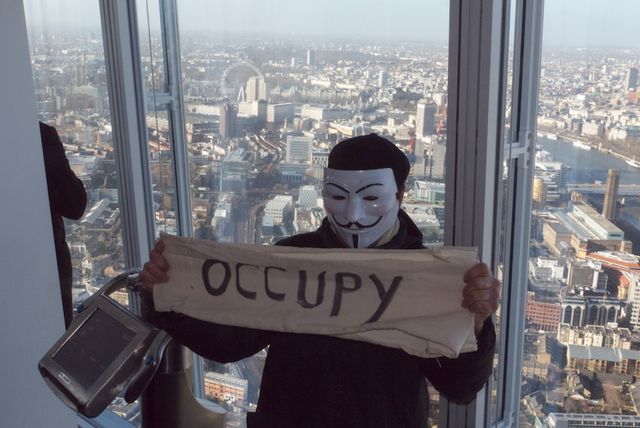 the shard is a monstrous shrine to capitalism in an area where there is a massive and ever-increasing shortage of affordable and social housing. as well as breaking the record as europe's highest homes, it will (according to reuters) create a record for the largest neighbourhood property price inequality in the world.

nearby, at the elephant and castle, the heygate council estate is about to be demolished and in its place will be a modern complex of flats. replacing the currently around 1100 council homes on the heygate estate, only 71 of the new build are earmarked as social housing, and even these will be achieving rents of £800 per month for a single bedroom.

the so-called "affordable housing" will be even more expensive, and the largest proportion of the project will be luxury dwellings on upper floors with private access lifts and decent views.

in a PR move for the shard, where flats are set to start from about £30 million rising to £50m for the penthouse, the management decided to offer free tickets to local residents ahead of opening their viewing platform to the public next week at £25 per head.

within half a minute of pulling out two small A4 hand-drawn 'banners' and lining up a shot with the elephant and castle and heygate estate in the frame, a security guard was asking what we were up to, where we were from etc. claiming that we needed permission to do whatever it was that we were doing.

moving to a different view, the anonymous mask and occupy banner came out, and again, security came round and asked for the removal of the mask. then the security manager came along and demanded to look in bags. when asked why a harmless mask and a couple of pieces of paper were a "security issue" he responded it was because it was "unusual".

we heard from colleagues that security staff had been called from the ground floor reception to a "security incident" on the viewing floor.

clearly the shard management are anxious to keep bad publicity and the raising of housing issues away from their elite bubble. today, they were unable to do so.

All that security have managed to do is to make this building one of the most desirable protest sites in London. I'm already making plans. I've even figured out a way of staying up there and there is not a thing they can do about it.