This afternoon a group of protesters have occupied the balcony of Birmingham Council House in protest over £625 million worth of planned cuts.and redundancies by the local authority.

"We are up above Victoria Sq in the Council house – We are here because we have a message to communicate to the city. Follow on #SaveBirmingham" 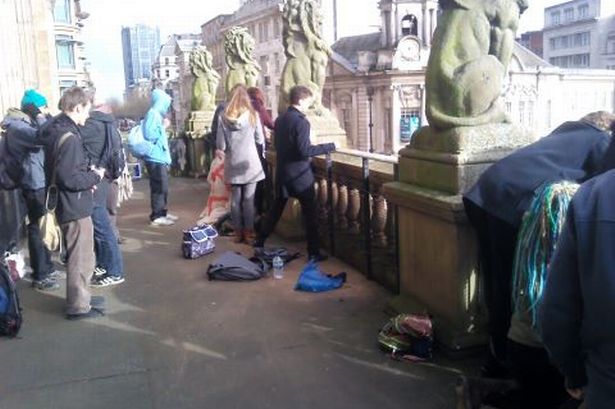 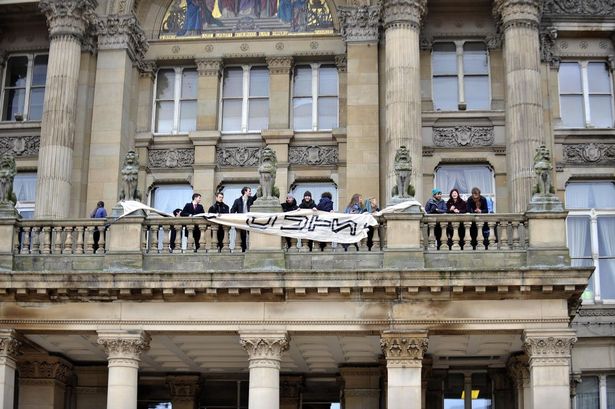 Tonight at 6:30pm the Birmingham Labour group are meeting. They have an absolute majority on the council and they are being asked by their leader Albert Bore and his Cabinet to pass massive cuts to the city’s public services that have been described as “the end of local government”. If the Labour group agrees to pass on the cuts next Monday, then Birmingham’s future will have been sold by them for the benefit of the rich.

"We are taking this action because the current system cannot go on. It is undemocratic and unfair. We need alternatives and are calling on the city to join with us and to seek another path.

We all know that austerity is not only cruel and wrong, but that it is also not working. So to anyone who thinks we should take a stand we say to you that you will find a great many friends and supporters amongst workers, trade unionists and service users in the community."

The council’s budget plan aims to make £625 million worth of cuts by 2016/17, with cuts of £110.9 million coming in the next year alone (2013/14). This is following on from huge and incredibly painful cuts already delivered – since 2010 there have been cuts of £275 million and a reduction in the number of staff by 27%. The average reduction in Government funding for councils as a whole is £74 per person. However, Birmingham’s reduction has been more than double the national average, at £149 per person. (1)


"Austerity is hurting. We need a budget that meets the needs of the people of city, not greed of the banks.

The central government must stop with their austerity program and cease its unfair disproportionate cuts to Birmingham and other cities. Our local government must do more to stand up for Birmingham; they should make a stand against the cuts, not merely implement them without a fight."

http://communitiesagainstthecuts.com/2013/01/05/letter-to-birmingham-labour-councillors/ calling on the council to join them in a joint campaign to save Birmingham. On the 16th of January 175 people met and collectively agreed on the need to up the ante or face complete defeat – the loss of nearly all our public services, the things that allow most of us to live decent lives. On the 3rd of February 210 people wrote a follow up letter to the council. Today while ther're occupying it, and anti-cuts groups are marching on the Council house to protest these cuts.

"Next our movement must build for the 26th of February – the day the council will formally vote through these cuts at a special budget setting meeting. Our actions on this day must be the biggest we can possibly organise."

Birmingham is the UKs second city, over 100,000 people are employed in industry that puts billions into the national economy, 7.2% of national exports come from this region. If workers, services users, trade unionists and communities unite and together say that we make this city work and we won’t work unless we have a decent quality of life, fair opportunities and our public services are left intact, neither the government or the council will be able to force their cuts on us.