On Saturday 2nd February Shell to Sea held a morning protest outside Bellanaboy refinery to highlight Shell's announcement of profits of €19.6 billion for 2012. 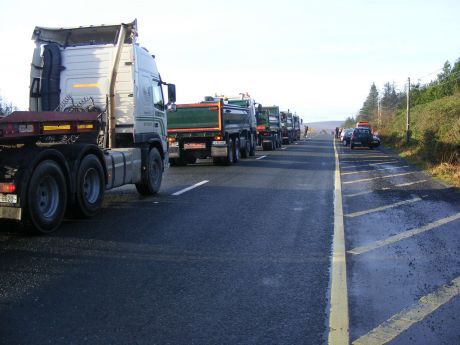 Speaking at the protest Shell to Sea spokesperson Terence Conway stated “These obscene profits announced by Shell this week come at the expense of communities and the environment where Shell operate”.

Mr Conway continued “Corrib clearly shows how far the government will go to serve corporate interests, they continue to put Shell interests before the interests of this community or indeed the whole country. This week, 95 rural Garda stations were closed down and yet this morning again you have Gardaí ready to jump to Shell's beck and call”.

Shell to Sea spokesperson Maura Harrington commented “The Government are still willing to force suffering on the people of Ireland through severe cutbacks, yet at the same time give our oil and gas away to multinational companies such as Shell, with no benefit to country. It is time for people to demand that this situation is changed”.

Shell trucks traveling to Glengad were disrupted a considerable bit in the last week, ranging in time from 2 hour blockages to a few minutes.
Related Link:

After 30 meters the Tunnel Boring Machine got bored

Having only just started working on the controversial tunnel, Shell's engineers are already facing significant problems.

This is the first time such a machine has had to deal with this unstable viscous material. This once again highlights the experimental nature of the project.

Despite having taken more than a year to design and build, according to our sources the TBM got stuck after 30 meters having only just reached the doib. As we write there's no end in sight for this headache.
The tunnel and pipeline cuts right through Sruwaddacon Bay which is a designated conservation site, a candidate Special Area of Conservation (SAC) and Special Protection Area (SPA).

Shell has insultingly named the Corrib TBM ‘Fionnuala’ after the female of the Children of Lir, one of the legends most closely associated with the Erris region.

Although the environment's help is welcome, we could always use more people here. Now that the spring is here come and help make 2013 another unlucky year for Shell.

"The TBM for the Corrib tunnel was designed and built in Schwanau, Germany by Herrenknecht, one of the world’s largest makers of TBMs."

"When constructed, the tunnel will [if it's built] be the longest tunnel in Ireland and the longest gas pipeline tunnel anywhere in Europe."

"As the TBM moves forward, a series of 1.2m wide concrete rings made up of precast interlocking concrete segments is erected. These concrete rings, which are fabricated in Ireland, will eventually line the entire tunnel."

"As the cutter head rotates, hydraulic cylinders attached to the spine of the TBM propel it forward a few feet at a time."
Related Link: