Metropolitan Police Commissioner Sir Paul Condon personally thanked undercover Special Demonstration Squad officers for saving the BNP HQ in Welling, at a time when the BNP were at their most violent
Metropolitan Police Special Branch infiltrator speaking in this Guardian video report (slightly old news, but well worth flagging up - see link). In The Guardian video a former Met riot squad then Special Branch officer describes how, in 1993, the Met instructed him to infiltrate a group called Youth Against Racism in Europe, in order to protect a BNP newspaper pitch on London's Brick Lane. The original series of BNP attacks, in which anti-racists had been battered nearly to death with iron bars, baseball bats, bricks and concrete blocks, are glossed-over by The Guardian as simply "a shocking incident on Brick Lane" (video 2:20). Nonetheless, as described, when left-wing groups fought back, the Met response was to try to protect the BNP paper sale! Ironically, since the purpose of undercover policing was ostensibly to prevent more violence, the officer says "Do undercover officers use violence for the purposes of maintaining cover? The answer is - yes they do" (video 3:45).

Just three weeks later, and in the face of the Metropolitan Police's total mishandling of the racist murders of Stephen Lawrence, Rolan Adams and Rohit Duggal, an anti-racist demonstration mobilised to protect the community where the police had failed, by attempting to march on the BNP bookshop in nearby Welling – which was, long before the BNP tried to clean-up their image, being used as an HQ by some the most violent Nazis in Britain. The Guardian interviewer states the officer's actions during the Welling demo helped "prevent" what he calls "massive disorder", despite massive disorder happening anyway, and despite police failure in respect of racist murders. The officer then states that "Had the SDS intelligence not said that if you don't stop the protestors going up that very hill, then basically they're going to tear down the BNP bookshop, Sir Paul Condon himself came out, it was roughly about a week after the demonstration, he actually thanked us for the work we'd done" (video 5:30).

To understand the tone of The Guardian's reporting in context, obviously if a recalcitrant former plain-clothes offers The Guardian an exclusive interview, they're unlikely to reject the offer of a journalistic scoop; however, according to the book "Beating the Fascists" (page 321), immediately the Welling demo had been announced, The Guardian supported a rival demonstration called for the same day in central London, to draw angry Londoners away from taking-on the BNP – although, to be fair, The Guardian's motive may have been to try to prevent disorder which would be used by rival right-wing media to help discredit the anti-racist left.

To understand the motives of the police in context, "Beating the Fascists" describes (page 322) a police commander appearing on TV the night before the Welling demo, predicting exactly where the flash-point for the demo would occur, and tells how on the day undercovers prevented anti-fascist militants from leaving the area, and "more or less frog-marched us back to the march" (the book quotes The Evening Standard as saying that "rarely can a riot have been so perfectly forecast; both sides knew exactly what was going to happen, precisely where it would happen, and give or take ten minutes, at what time"). So, while the interview given by the former plain-clothes suggests that Sir Paul Condon thanked his spies for preventing the destruction of the BNP HQ, in terms of the role that what's now known as kettling plays in encouraging violence, other reports suggest the plain-clothes cops weren't there to prevent a riot.

What about that poor kid you hypocrit cunt

This article is an analysis of an interview with an undercover police officer. Richard Everett was the (white) victim of a racially motivated gang murder, so, while his case is extremely important, like many other extremely important issues, it's not relevant to this article

And learn to spell "hypocritical", you cunt

Richards case was not a racist attack it was brushed under the carpet by the pc libeal elite. One law for one one law for others you are a fuckin hypocrit cunt. 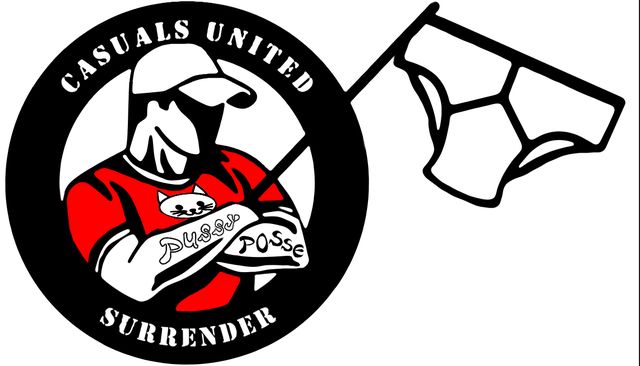 The news is true, Mister Jeffrey Marsh Esquire, the middle-aged hot-air specialist, famous for getting all psychopath and stabbing Man United fans including children, yet talking shite about anarchists being scared of him, has fucked off to Sunny Spain. In other words, the screwloose fatarsed prick has well and truly fuckin' surrendered, leaving the teenage girls this sick paedo has groomed to hold the fort.

Tell all your friends, dudes, and remember to remind all on sundry that Casuals United no longer exist.

(A) NO MASTERS, NO GODS AND NO (SO-CALLED) CASUALS UNITED!