The UK Government’s controversial Back to Work programme, deemed workfare by critics, received a bloody nose this week as all but one of the WorkFare schemes were found to compel a person’s labour and deemed illegal by the Court of Appeal at the Royal Courts of Justice. Though not an ultimate victory, this ruling sends a clear signal to the UK government that the public might not be willing to surrender their social contract without a fight after all. 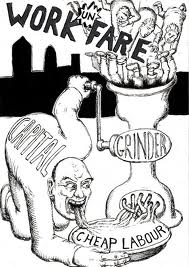